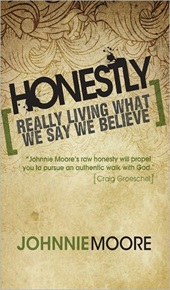 In his new, Honestly, book Johnnie asks "what could happen if Christians began to live what they say they believe?" He also shares his first encounter with hypocrisy, and how his resulting doubt led him on a journey around the world, from the Dalai Lama's home to Rwanda .... and almost away from Christianity all together.

Why did you write "Honestly?" 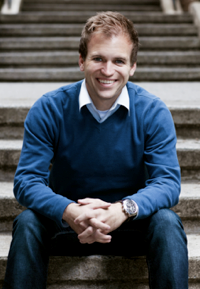 For 2000 years, hypocrisy has been Christianity's biggest problem. It is the singular issue that has alienated more people from the church than any other. You know it; I know it; everybody knows it. It's the proverbial elephant in the room, and, yet, we rarely deal with it openly and honestly.

Secular people don't take us seriously because we bloviate endlessly about our do's and don'ts knowing for sure that we often don't practice what we preach, and many well intended, genuinely religious people, leave Christianity totally disillusioned because of their experience with what Paul called "a form of godliness with no power." What I call fake religion.

Christian television personalities come crashing down in moral failure, preachers and spiritual leaders seem as if they live in some artificial, plastic bubble, and, generally speaking, the church is often irrelevant to everyday life. One of the major reasons why these things are true is because we've neglected the heart of Christianity. Jesus said, "if you love me, you will do what I say."

This books asks, "how would the world be different if Christians actually lived what they say they believe?," and it openly addresses why we often fail to do so.

Why "Honestly?" as the title?

The title, "Honestly," reflects the tone of the book (which I call confessional) and subtitle, "living what we say we believe," is indicative of the content. Most of the time self-righteous people deal with hypocrisy with a narrow finger pointed in the eye of someone who isn't as holy as they are.

It's very difficult to deal with hypocrisy without being a judgmental Pharisee that no one wants to listen to - unless, of course, you're a victim of hypocrisy yourself.

When I was a kid the marriage pastor at my church, who was counseling my parents through their divorce, was simultaneously in an affair with another Pastors wife. Hearing of this sent my faith in a tailspin. The book begins with my journey from "doubt" to "belief" after nearly losing my faith because of the divergence between Christian claims and the way this world actually is.

Talk about that for a moment. You actually almost lost your faith?

Yes, while I was a pastor Liberty University I was struggling on the inside with some deep-rooted issues with Jesus and the church that I had never dealt with. It caused me to go on a search around the world for the truth. In the book, I write about visiting the Dalai Lama's village in the Indian Himlayas, about sitting on the banks of the Ganges River wondering if Hinduism might have something worth learning, I visited Asia's largest mosque, stood where Buddha delivered his first sermon, and even tried to reconcile God's character and evil from a mass grave of over 200,000 genocide victims in Rwanda. I also witnessed 2000 Bible School graduates take a martyrs oath before receiving their diplomas, a one-way train ticket, a Bible and a bicycle. They immediately left to become missionaries to their own people in a persecuted country.

In some sense, I kicked the tires of the world's religions, asked the hard questions, and, in the end, I found a kind of authentic faith that is not only worth living for, but also worth dying for.

I also learned that our doubts are not our curse, but a gift of God .... read chapter 2.

You claim to be a "hypocrite in transition." Are you writing a book about hypocrisy as a hypocrite?

Well, we all are, aren't we? And that's OK. We have to "work out our salvation," as Paul says, and we're all going to be hypocrites sometimes as we struggle to become the person God designed us to be. It's OK to be a hypocrite in the fight.

It's not OK to be content as a hypocrite. In Honestly, I argue that hypocrisy, which is actually just fake religion, is normally caused by one of five "soul sicknesses." Those five make up the five sections of the book.

What is your hope for this book?

The practical vision for the book comes from my desire to help former Christians, struggling Christians, and skeptical people, through the same journey that I went through from doubt to belief. I want to be the guide for them that I didn't have.

I wrote this book knowing that there is more to Christianity than most of us have seen or heard, that even our loved ones who are farthest away from the church might come home, and that people whom we never imagine would turn to Jesus might, as yet, find Him to be what they're looking for.

I hope people all around the world will give a copy of Honestly to everyone they know who is far away from God, or burned by His church. This book is for the rest of us who really want to believe but just have some real hurt or real questions to deal with first. Above all, this book is honest. Unfortunately, honesty isn't sometimes our specialty in the church.

Johnnie's hanging out on the blog today, so leave your questions and comments below.

Join the conversation on Facebook
Tags:
None
Posted:
September 1, 2011