On a recent post I reviewed the newly released movie, The Help, in two parts (part 1 dealt with the movie, part 2 dealt more with issues of race). As I noted then, the main issues in the movie are race and class, and people should not miss those, but I was struck by yet another issue. As I tweeted from the movie: "The Help's mix of elitism, judgment, & scorn (wrapped in cultural religion) is STILL real & even taught as discipleship in some places."

Hilly Holbrook is the antagonist in the film, pitted against the two protagonists, an African-American maid and a young white woman writer, both of whom wanted something different than they inherited from society. But Hilly was a respectable "Christian" woman who took it as her responsibility to teach people cultural values and to look down on those who did not embrace her specific beliefs.

When given a chance to help a maid in need, for instance, she takes the position that God would want her to work harder. Never mind that the average maids were making less than $1.00 an hour and many African-American men had to work for terrible wages as well. Hilly took it upon herself to keep people "in their place." Ultimately, she scorned everyone she didn't like or who didn't measure up to her standards-- and she did so using her "Christian" beliefs as a club.

Grace was not a part of her life; it was all judgment and condemnation. And, the condemnation was built around the idea that others were just not "good Christian women." 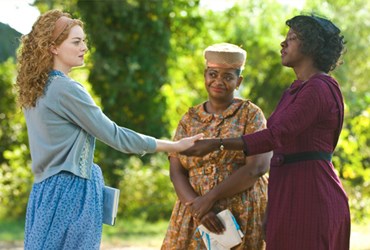 As the movie played, I felt some strong emotions. I wanted to stand up and shout at the Hilly character: "I know you. You hurt people, and you do so in the name of religion."

Hillys are still too common in the world where I live. They may not be focusing on the exact same issues she concerned herself with, but the tendency is the same. Cultural norms become elevated to the level of defining what it means to be a Christian-- particularly a "good Christian woman."

I've seen how being a "good religious woman" that fits religious-cultural expectations destroys the lives and passion of women. My wife calls such training, "making Stepford Wives." While I watched The Help, I could not help but consider how many times I have seen that "Hilly look" when some women did not want to fit the same mold.

There are biblical values and direction for the home and church-- and I believe they matter. That is not what this post is about. I have the utmost respect and admiration for my wife as she cares for our children and our home. I believe there is no greater calling than motherhood.

Yet, for many, it is not just valuing motherhood that matters. They have taken the forms and structures of a particular American religious sub-culture and elevated them to the level of what it means to be a follower of Christ. Is it really biblical discipleship to look down on those who do not adopt our same forms and cultural values wrapped in religious language?

Gospel-centered values must not be confused with the values held by Hilly Holbrook and her spiritual kin who look with scorn upon those who don't line up with their cultural religion--a religion that kills as thoroughly and completely as that of the Pharisees.

I teach my daughters what the Bible says about men and women. I also teach them to watch out for people who teach Biblical womanhood by looking at others with elitism, judgment, and scorn. That's a cultural religion and it kills. I've seen its result (up close) in people who have been told that their gifts did not matter if they could not set the right table setting-- and it's wrong.

Think about the implications of such unbiblical teaching. I have yet to find, in the Bible's lists of ungodliness, "You forgot the salad fork." Nor when Jesus spoke about the sheep and the goats did He say, "I stopped by for a visit and you didn't serve me tea." And I cannot imagine a Bema Seat scenario during which Christian women are judged by Miss Manners. Yet, with this pseudo-religious, cultural emphasis on housekeeping, you'd think "tending the flower garden" was a fruit of the spirit.

Maybe you cannot relate to the specific scenarios I'm suggesting. But ask women about their anxieties when having others (especially other women) into their homes. Many know they will be judged on the basis of how clean, comfortable, or "classy" their house is. It's a softer, more feminine legalism, but just as deadly as any other variety.

Hilly is alive and well teaching a cultural religion, all while confusing it with biblical womanhood. Too often I see tribalistic expressions of "biblical" femininity under the guise of biblical fidelity. Reject this unholy caricature--rebel against anything other than what the scriptures actually say.

We need to speak out when we see cultural expressions forced on people as if they were biblical norms, even if it is dressed up as a self-improvement project. It is legalism. If a rose by any other name smells as sweet, then legalism by any other name still smells like the decomposing corpse it is. I agree with Chuck Swindoll who explained:

The problem with legalists is that not enough people have confronted them and told them to get lost. Those are strong words, but I don't mess with legalism anymore. I'm 72 years old; what have I got to lose? Seriously, I used to kowtow to legalists, but they're dangerous. They are grace-killers. They'll drive off every new Christian you bring to church. They are enemies of the faith. Other than that, I don't have any opinion! So, if I am trying to force my personal list of no-no's on you and make you feel guilty if you don't join me, then I'm out of line and I need to be told that.

Yet, I also feel a bit of sympathy for those who have been locked into the cultural religion trap. I hurt for those who are so convinced they are right and are compelled to make people conform to their own ways of believing, way less biblical than cultural. They have long lost the joy of their salvation.

At the end of the movie, Aibileen, who loses her job after her boss is pressured into firing her, asks a crying Hilly,"Ain't you tired, Miss Hilly? Ain't you tired?"

People who spend their lives imposing cultural rules rather than living for a radical gospel do get tired. And they should; trying to live by rules and regulations does get tiring. I'd like to ask you Aibileen's question to those purveyors of cultural religion, "Ain't you tired?" Ain't you tired of creating rules that impose cultural values as if they were biblical teachings?"

Maybe I am the wrong person for such a post-- a white, complementarian man in a conservative denomination. Yet, too often I see conservative evangelicals propagating cultural expressions of religion under the guise of biblical fidelity. At the end of the day, I think we can hold our best understanding of our scriptural convictions about gender and not re-create Stepford. Ironically, the Proverbs 31 woman-- a strong, female business owner-- would be shunned in many of the very places that proclaim that chapter. She would not fit into the cultural values masquerading as biblical truth.

I am encouraged that some are rejecting Stepford and are following God's call and looking for more. Sharon Hodde Miller, who I met at The Summit Church and learned of her work from my friend J.D. Greear, put it this way on this blog back in 2008:

We want to be women of vision, women who use our minds, our educations, and our time to change the world. This requires more than a Christian self-help book or a pep-talk style devotion at the beginning of each day. It requires leaders and teachers who can challenge us to think critically about our culture and what is going on in the world, as well as engaging Scripture in an active way, and living it out radically.

Some will pursue and live the high value of motherhood. Others will not marry at all. Some will stay home with their children, others will work in business, charity, and government. As all follow Christ, we can rejoice.

Many of the readers of this blog are Christian leaders. I urge you to stand up to the legalistic machinery that demands the production of Stepford Wives. (Since Donna is a pastor's wife, and this expectation issue is common there, I will also add: defend the pastors' wives and make space for those who are not in the mold of this pseudo-Christian sub-culture.) The priority for all women who are followers of Christ is that they be encouraged to the abundant life that Jesus has for them, following him with passion as he leads them.

Hilly did not think that others were "good Christian" women. I think some good Christian women are wonderful hostesses and I thank God for them. Others run businesses, some fight poverty, still others move to Nepal as missionaries. I thank God that Hilly (and her modern counterparts) did not get ahold of them before Jesus did.

A woman's place is following Jesus.

Join the conversation on Facebook
Tags:
None
Posted:
September 7, 2011