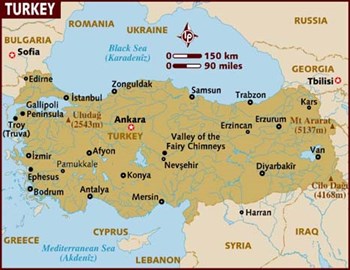 I've been using the blog for an interview with a "worker" in Central Asia over the last two posts (see Part One and Part Two). Today we'll change gears again and talk about some of the theological issues that arise when doing ministry among Muslims.

These are important issues and, well, it seemed like a good idea to actually ask someone who has dedicated his life to doing ministry among Muslims.

One of the controversial things about working among Muslims--and it has flared up again recently in the states--is some of the terminology that used when relating to Muslims. I understand that you have been a proponent of the "Allah" terminology. In other words, you refer to God using the term, "Allah." Why?

Here in the country where I live, we have two words. The first is a word with a Shamanist background. Or we can use "Allah," which is a word with a Semitic background that is almost identical to the word that Jesus used to refer to His Father on the cross when He said "Eloi, Eloi . . ." The Aramaic and the Arabic are virtually identical in pronunciation. We have communities of Christians here which predate Islam who still to this day worship in Aramaic and who call God "Allah"-- and they have been since long before Islam ever existed. So, it's our word. In many ways, the whole thing is a silly argument. The key is to use whatever word is most useful in any given environment.

In an area where the only word they have is Allah, I use Allah. If I'm speaking Farsi, I use the word "Khoda," which in their language is the neutral word for God. So it's entirely a matter of utility, in this case. In English, the word Allah means to most people the god of Islam. Here in this country, the word Allah simply, generically means God.

As an Army Chaplain, I was criticized for my lack of ecumenicism because I would not hold a joint worship service with my Jewish friends. I would say we could pray at the same time, but we're not praying together. How could we be? I am praying to a God who is irreducibly Trinitarian and they are praying to a god who is unchangeably Unitarian.

Bob Roberts is a friend of mine and he recently challenged me: "If American Christians loved Muslims like Paul loved the Jews it would change the world." What do you think?

It would. So much of it is hospitality toward strangers. America tends to be a very unfriendly environment for the stranger. But a huge Old Testament concept is how we relate to the stranger. If simple hospitality issues were addressed, taking the initiative is important. In my country, you ask somebody how to get somewhere and they're probably going to walk with you there, not just give you some directions. So I think that if the Christian community began taking initiative to practice hospitality toward the Muslim immigrants in their area, that would just go a long way. If we will do it, they will reciprocate. And in that context you will find it very easy then to get into gospel conversations.

What about those of us in the United States? How can we better relate to Muslims?

There are huge communities of Central Asians and other Muslims in America. Unfortunately, those people, for the most part, encounter hostility from Christians. Instead, I say to seize the opportunity. Love on them. Love them warmly. But when you invite them over, please don't serve pork!

I had to learn the little things myself as I engaged my Muslim neighbors. I knew we could not serve pork, but was surprised they could not come over to roast marshmallows-- until they explained to me what is in gelatin. But, they were still thrilled that we invited them over.

Right, because it may have pork products in it. But love those folks. They are incredibly reachable, and often still in very close contact with their relatives back here. Right now, what they perceive is that Christianity is their enemy. Anything American Christians can do to break that down will only help us. My main message to the American church right now is simply, "Love Muslims." If we allow nationalism to interfere with the Great Commission we have failed them and the Savior who sent us.

Thanks to my friend and co-laborer for sharing. Great and helpful information. On Sunday at Grace Church, we will talk about some steps we are taking in regards to "Loving Muslims" (the resources are here). I hope you are as well.

Join the conversation on Facebook
Tags:
None
Posted:
September 8, 2011