Last week, we released some new research on the economy and its effects on the local churches. Because of how economics works, the church is typically late to feel the impact of recessions and, subsequently, slow to recover from it. As long as unemployment remains high, and churches emphasize proportional giving, giving tends to be impacted. So, while we have seen a slow, measured recovery of the national economy, financial concerns remain for many churches.

The survey of 1,000 Protestant pastors asked respondents "how is the economy impacting your church?" Almost two-thirds (64 percent) responded negatively, with 56 percent indicating somewhat negatively and 8 percent very negatively. One quarter of the pastors surveyed said, "the economy has had no impact on my church," while 9 percent indicated a positive impact on their churches.

However, there is some good news. LifeWay Research found that while the sluggish economic recovery has translated into flat or reduced giving for many churches, the trend continues of fewer churches reporting declines in giving.

The research did show that giving is coming back up for churches though: 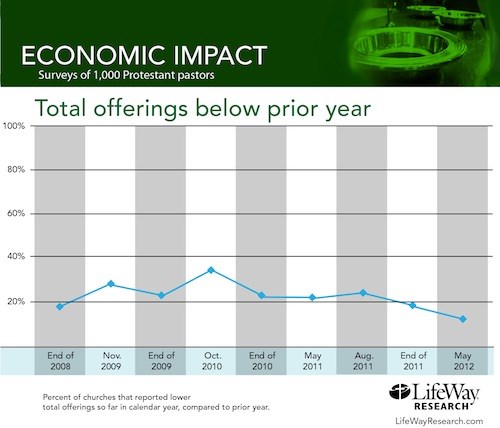 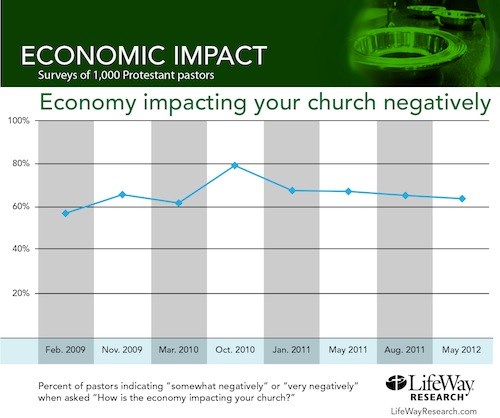 As you can tell, the worst point seems to have been fall of 2010 (a year AFTER the recession officially ended). It is not better, but it is getting a little better.

Join the conversation on Facebook
Tags:
None
Posted:
August 28, 2012