Candidates Talking Religion: Democrats Don't Like It, Republicans Do

The first reason this is a mistake is that Santorum has decided to make the presidential campaign about religious orthodoxy and introduced theology into politics in an aggressive way. His less than subtle message is that anyone who believes in the Bible, or even takes the Bible seriously, should be suspect of the president who is serving up 'false teachings' referencing Matthew 7:15 which reads: "Beware of false prophets, who come to you in sheep's clothing but inwardly are ravenous wolves."

Santorum's recent comments should be a major turn off to anyone who understands that while all politics are informed by values, religious and secular, we should be very wary when politicians begin to assert religious creedal tests into electoral politics.

Raushenbush believes such talk "should be a major turn off," yet it appears that it is predominantly a "major turn off" primarily to Democrats. Our research says that Democrats don't like "all that religious talk," but Republicans do.

Last month, we released, USAToday reported, and I posted some new data from LifeWay Research about the impact a candidate's faith has on voters. 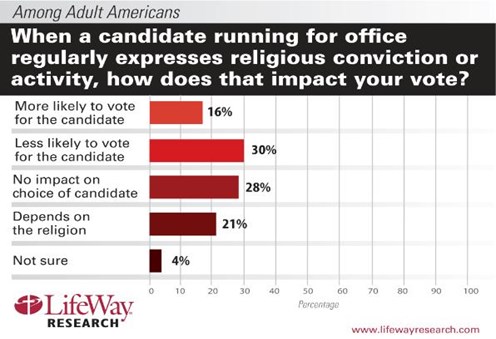 We received a follow up request from the Louisville Courier-Journal asking about the breakdown between Republican and Democrat voters. We crunched the numbers, and here is the result: 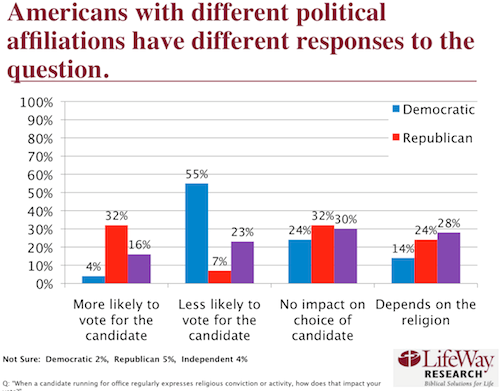 As you can see, there is a great disparity between the Republican and Democrat response in light of a candidate's religion.

In fact, Republicans (32%) are eight times more likely to be influenced positively by a candidate's religious views than Democrats (4%). Independents (16%) fall in between the two political parties. Depending on the religion, a majority of the Republicans might be seen as having a positive view of such religious discussions.

Conversely, Democrats (55%) are nearly eight times more likely to be turned off by a candidate's religion than Republicans (7%). Independents (23%) again fall in between the two political parties.

So, yes, religious talk turns off Democrats... but Senator Santorum is not running in the Democratic primary.

Join the conversation on Facebook
Tags:
None
Posted:
February 20, 2012

Candidates Talking Religion: Democrats Don't Like It, Republicans Do