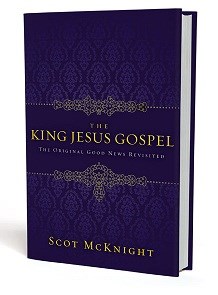 When I was up in Chicago recently, I had the privilege of sitting down for breakfast with Scot McKnight. Scot is a prolific author, blogger, and speaker. I've been encouraged, challenged and often provoked by his thoughts on his blog Jesus Creed.

His most recent book, The King Jesus Gospel, challenges evangelicals to rethink the nature of the gospel itself. Right now many people are discussing the gospel-- its scope, its nature, and how it relates to the Kingdom. I think Scot's proposal will provoke widespread discussions on the matter.

When Scot and I discussed doing this interview, I asked if he would let me present some of the harder questions that some people whom he would call "soterians" are asking about his book. He agreed, so you will note questions like "Is John Piper really preaching the gospel?" or "How does justification relate to the gospel?"

Scot will be interacting in the comments today. I am actually on a plane to Australia, but I have no doubt Scot can handle himself since he is one of the most prominent Christian bloggers in the world. As always, the comment rules are in effect, and be sure to engage respectfully on these important issues. I think a good dialogue on these issue will matter, and I hope to model that here.

1. What was your primary purpose for writing this book?

I have been working on "gospel" for about a decade, beginning in my classes at North Park and some of this has been written up in Embracing Grace and A Community Called Atonement. All along I had a sneaking suspicion that a whole new angle had to be found in order to open up a more completely biblical approach to the meaning of gospel. I had been following a traditional line of thinking and trying to be more biblical. That is, I was following the line of thinking that gospel and salvation (soteriology in technical terms) were more or less the same thing. I was seeking to expand salvation to biblical proportions - personal, physical, church, society - and I joined many voices in that pursuit. But all along I kept asking myself: what about 1 Corinthians 15, which doesn't focus on salvation but on Jesus as Messiah and Lord, and most especially I kept asking where to put the gospel sermons in Acts? For a set of lectures in Stellenbosch I devoted myself to the Book of Acts and around the same time I became convinced that Gospels (Matthew, Mark, Luke, John) are the gospel itself.

This set of factors is the entire purpose of why I wrote this book: I wanted to offer a more biblical view of gospel and to put what many of us (and I was one of them) call gospel to the test.

2. How do you define the gospel in the book?

3. In the book you seem to want to emphasize the differences between  what you call a "soterian" gospel and the full evangelical gospel? How  do you define these and why do you believe it's necessary to  distinguish between them?

In brief, the soterian (Greek word for salvation) gospel is a message of how to get saved from sins and how to be properly related to God. In brief, the apostolic gospel makes the Story of Israel and the Story of Jesus first, and not my personal salvation, and makes personal salvation second. I distinguish the two because our current models of the gospel -- and here I ask that we consider what we tell people who we think are not Christians -- do not sufficiently pay attention to how the New Testament talks about the gospel. We can find that gospel in 1 Cor 15, the sermons in Acts, and in the Gospels. I constantly ask this question: Do you think the gospel is found in those three points?

In brief, it works like this: the soterian gospel is a message of salvation without the Bible's Story (Israel fulfilled in Jesus as Messiah and Lord) and the Story gospel I am pleading with us to consider more carefully has both the Story line and the salvation message.

The alternative is not "Story" vs. "salvation" but Story with salvation vs. salvation with no Story.

4. Why do you point to John Piper as one of the most poignant examples  of a "soterian" in our day? Are you suggesting that John Piper doesn't  rightly define and present the gospel?

This is a tricky one, Ed. I value and welcome John Piper as a brother in Christ, and as someone God has used for the good of the church in our day. I was a fan of Desiring God when it came out when many of my colleagues thought the book dangerous (that word "hedonism" got him in Dutch with some). I disagree with Piper at times, but we serve the same God in Christ and we are driven by the same things: to glorify God by living before him and proclaiming the gospel in our day and we do and say and write.

Having said that, yes, I disagree with how he sometimes (not always) frames gospel and he is in my view one of the most influential leaders in the evangelical movement today. So what he says matters to me. In The King Jesus Gospel I engage Piper twice: the first time negatively, the second time positively. I hope that is observed.

Negatively, when John Piper asks if Jesus preached Paul's gospel I don't dispute that as a good question (my friend Mike Bird thinks that question is backward, which it is in some ways). I dispute how Piper answered it: he wanted to find if Jesus preached or taught justification by faith in the double imputation mode. I don't think gospel can be reduced or defined that way, though I would say Luke 18 is not that far from justification by faith (though double imputation is much later and Piper does not push that element hard, so it's not a concern of mine).

First Christology, second soteriology. I ask if Jesus is as ego-centered as Paul as Christ-centered. I believe he was.

In John Piper's God Is the Gospel I find much more reason to be in agreement, though there he is pushing his very common theological core: the glory of God in the face of Jesus Christ. I have no reason to dispute that framework even I would like Israel's Story and Jesus' Story as Messiah and Lord to be more central. We are on the same page here but not on the same lines.

5. In your view, how does justification relate to the gospel? Are they  separate matters? And is it right or wrong to say that the church  stands or falls on the doctrine of justification?

In regards to "stands or falls," that's Luther. It's not the New Testament. I can think of this in about ten ways, but if one denies that God declares us right in Christ, then Yes, the church stands or falls. But if justification gets ahead of God the Father, Son and Spirit, if justification is the dog that wags Christology's tail, then I'd say "No."

6. How would you respond to the argument that you seem to be trying to  make the gospel story of Jesus and the plan of salvation mutually  exclusive?

Those who say that are not reading me carefully enough. I have made a sharp contrast in my book between ways to frame gospel. That is, one frames the gospel as salvation or as Story. But as I said above, the real contrast I'm making, which is clear in my book, is between a message of salvation that needs no Story (and I can give hundreds of examples, beginning with the four spiritual laws - how much Old Testament do we need there?) and a gospel that is about the Story that brings salvation. So here it is again:

Salvation with no Story vs. Story with salvation.

Not Story (without salvation) vs. salvation (with no Story).

I'm asking for more, not less. I think the standard gospel on offer is too much of a "less" and not enough of a "more."

The gospel of Jesus and Peter and Paul is a gospel that is first Christology and second soteriology.

7. If the church were to adopt your definition of the gospel, what  would the mission of the church look like and what would our  evangelism look like?

We would be telling people about Jesus, about a Jesus who fulfills Israel's Story, who is Messiah, Lord and who saves us from our sins. Let me make this point clear because it's subtle and pervasive: is our gospel something that tells us about Jesus (who saves) first and foremost or is about salvation first and foremost?

Our evangelism would be declaring what Peter declares in Acts 2, 3, 10-11 and what Paul declares in Acts 13, 14 and 17. And it would see that every passage in the Gospels is pure gospel. It would show how Romans explains how Gentiles now join Jews in God's Story in this world, and it would show how they are both accepted on the same basis: in Christ. And they respond to that message by faith and by faith alone.

8. Do you believe that individuals are called to make a decision to  trust and follow Christ?

Absolutely. In fact, Ed, I want to say it just how John Baptist, Jesus and Peter and Paul say it: Our response is to repent, to believe, and to be baptized (and that leads to the kind of confession of Jesus as Lord that Paul states in Romans 10:9-10).