This morning, Penn State University released the findings of an internal investigation led by former FBI director Louis Freeh. The investigation was to determine who knew what, when they knew, and what they did with the knowledge that former assistant football coach Jerry Sandusky was sexually abusing children both on and off the campus. Sandusky was convicted of 45 criminal counts last month and is awaiting sentencing, and the coach who, according to the report, knew about it passed away earlier this year.

Some of the key findings of the Freeh's report (per ESPN.com):

• Paterno and others showed "callous and shocking disregard for child victims."

• Evidence shows Paterno, Spanier, Schultz and Curley did know of 1998 investigation and Paterno "failed to take any action."

• Penn State changed its plan and did not alert authorities of Sandusky's alleged actions after consulting with Paterno.

I wrote about the incident asking, "How Should We Remember Joe Paterno." I received tweets, comments, and even a couple of postal letters of complaint that I was rushing to judgment. But, I think that this is a big issue-- and institutions, colleges, and churches need to do more. Paterno did not and you should not make that tragic mistake. Children matter.

In that article, published before yesterday's report came out, I wrote:

Coach Paterno reported the abuse to his supervisors-- but he did not do enough. Coach Paterno understood and said, "It is one of the great sorrows of my life. With the benefit of hindsight, I wish I had done more."...

Coach Paterno is more than that one great failure, but for the sake of future generations, we must not forget that failure...

Yet, the fact that this stain will be forever be connected with Paterno's legacy may, in fact, lead to the protection of future generations. People will remember, be more likely to report, and perhaps more children will be protected. If future "people in power" will remember what Paterno's inaction cost him and others, maybe they will be less likely to ignore the cry of an innocent victim.

As best we can tell, Coach Paterno was a great coach and leader who made a big mistake that allowed immeasurable harm. Yet, part of Coach Paterno's legacy may well be to remind people to protect children in a way he did not.

Coach Paterno wished he "had done more" to protect children. I think that through his tarnished legacy, he will.

So you're probably wondering what a horrific chain of events in State College, PA, has to do with the local church. For starters, this isn't isolated to a college campus, city, state, or nation. This story could easily have been about your church, the one down the street, or one around the globe. When people trust institutions (schools, colleges, churches, mission agencies, etc.) that trust must be protected. Yet, not all churches see how prevalent such incidents are.

In a 2008 LifeWay Research study, about 4% of Protestant churches indicated they had a report of sexual abuse and 2% had a validated sexual abuse claim in their church. However, we should not assume that is the end of the story-- abuse often goes unreported and, hence, is not investigated or validated. 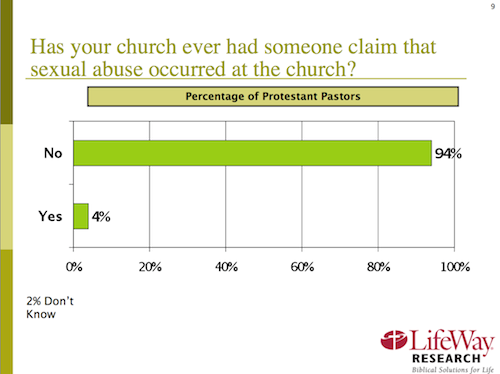 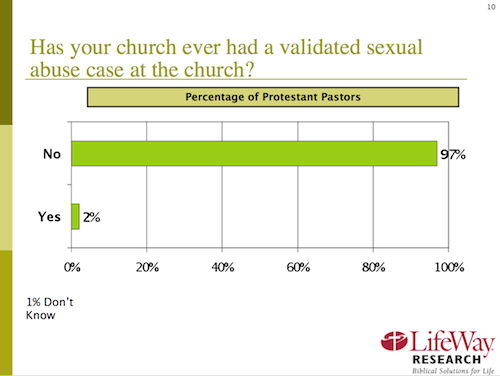 This "non-reporting" is a crime-- another crime, in addition to the abuse, against a child. Let me say it again, NOT reporting is a crime in most states and wrong in all.

Not reporting child abuse accusations, or even investigating allegations yourself, puts others at risk. It should not have taken more than a decade for Sandusky to come to justice, and the Freeh report demonstrates such. Countless lives were affected as a result of the negligence, inaction, and lack of responsiveness of a few.

What can our churches learn from this and how should your church respond?

First, churches must, at the very least, conduct intentional background checks prior to allowing anyone to work with children. I realize this comes with a price tag. But there is no price too high when considering the value of a child. This cannot be a budgetary debate. The cost in the long run if ignored is infinite, both for the victim and the kingdom.

Our research has found that 72% of pastors say the church they serve is doing background checks for children's workers. (And, to be fair, people who answer polls sometimes do so overstating the "right" answer-- called a "halo effect" so that might have to be factored in.) However, if more than half are, that's great and real progress, but I have to question the wisdom of the more than 1 in 4 that are not. Until all churches are checking workers and providing appropriate security, there is more to be done. 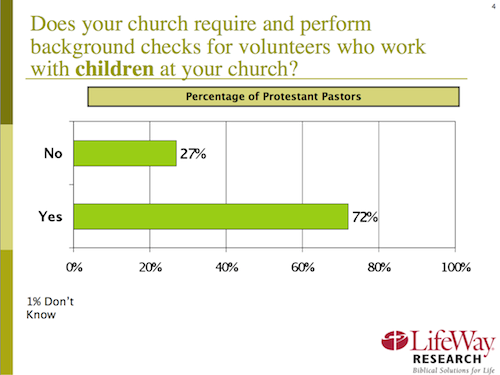 There is always risk because evil people are, indeed, real and present. Churches should know that-- and prepare, plan, and train accordingly. You need check in, check out, and other security and training procedures.

Second, if you don't have a security policy in writing, schedule a meeting this weekend and get it worked out before your church gathers again. This cannot wait. It will not write itself, and you cannot ignore the potential damages that could be done if you delay.

These steps are the baseline-- the bare minimum-- but many times even these are left undone. Your context will probably need other procedures, policies, and awareness, but these are just basic safety measures that every church should take. (Be sure to read up an learn more about child security, but start now.

As for reporting or investigating alleged abuse, too often churches first try to deal with things internally, though their church structures and systems. They should not-- just as Penn State shouldn't have. Child abuse is a crime and accusations of such should be investigated by professional law enforcement. Well-meaning churches often try to handle such situations and the result is that they wind up doing harm instead.

Child abusers are cunning and churches can be targeted because of the trust they engender and the children they gather. By the nature of their ministry, churches can seem easy targets so they need to plan to protect the children entrusted to them. That's why I'd encourage you to provide training to leaders in how to spot patterns and watch for abuse-- not to create a culture of suspicion, but to foster and environment of safety.

Please learn from Penn State and protect the children entrusted to your care. Learn from Joe Paterno's tragic failure. Don't wish, as he did, that you "had done more." Too many children have been hurt already. Address it now.

At my church we use:

and Fellowship One child check-in

But there are others including:

And, if you don't have a computer system to check in kids, you can use paper slips. There is no excuse-- any church can and must do this.

Join the conversation on Facebook
Tags:
None
Posted:
July 12, 2012

Sandusky, Sexual Abuse, and Security in Your ...