Below is an analysis and commentary on the SBC membership and baptism trends. LifeWay just released the data and sent my commentary out, so I thought I would post it here. I'd ask the patience of my friends from other (or no) denominations, but since this is national news, it is worth the time to share here. Southern Baptist are the largest Protestant denomination in America and its future impacts all of evangelicalism, even globally.

The article talks a lot about trends-- and one in particular. It's called a membership change trend-- and you really need to get to know this trend if you want to understand the future. It's a long and consistent trend. I give more details about it here and have been expressing concern about it for quite some time.

We've been talking about this trend for several years. Here is 2008, 2009, and 2010. A few years ago, some leaders wanted to argue about the reality of membership decline since it was small and just one year... then two... then three... then faster... Yet, as I preached at the SBC pastors conference a few years ago, "The membership decline of the SBC is not a matter of debate, it is a matter of math."

Well, I think we are past the debate stage now. At this point, we need to consider what to do about the stubborn reality. Here are my annual thoughts on the subject. 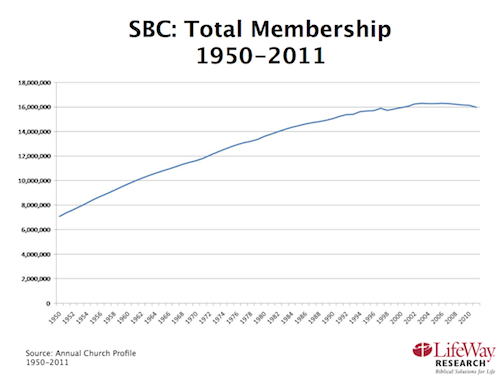 And here is your question for the day. Again. What will it take for the largest Protestant denomination in North America to move from decline to recovery to growth?

For five years in a row, the Southern Baptist Convention's membership has declined. Total membership has decreased 2% since 2007 including a near 1% drop this year--an acceleration of decline. But, the more disconcerting trend is the percent change from year to year. That trend is going exactly where we expected it--and not where we want it to be. This trend points to a future of more and faster decline--and it is a 60-year trend.

This year, we declined at about the same rate the United Methodist Church has over the last few years. Based on the trend of annual percent change in SBC total membership, we are catching up with the Methodists, and will match their decline rate consistently by 2018. 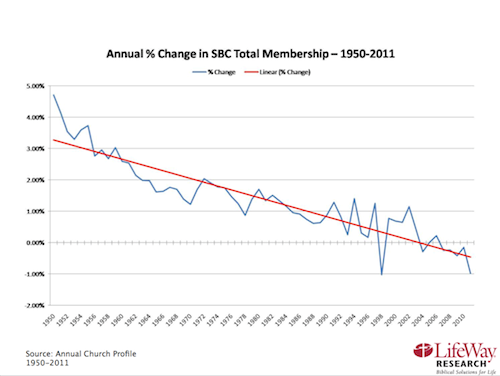 Baptisms in the SBC are also on a slow decline, and have been for over ten years -- a 20% decrease since 1999 . Baptisms ticked up a little this year--but this is the second-worst year we've had in more than 60 years--and it is not time to celebrate yet.

We've gone from really bad to not as bad as the year before--but the trend is clear.

The baptism graph does not take a statistician to put a trend line on the last decade--it's been trending down. 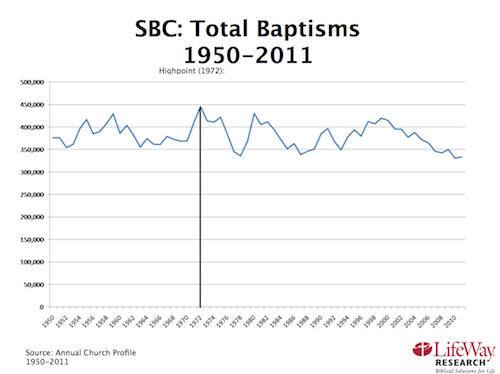 So, membership in the SBC is now on a multi-year decline. Our "growth" trend is now negative and our membership is decreasing. As researchers, we "bring forward" membership numbers for non-reporting churches in order to maintain consistent estimates of the size of the churches and the convention. Therefore, the argument that some churches are not reporting their membership numbers won't work. In fact, it may be delaying the indication that further decline has already occurred.

Currently, there are other denominations and movements that are merely managing their decline. However, I for one would like for our leaders, pastors, and members to stare reality in the face and fight for our future. Facts are our friends even if these facts are not so friendly. We can join God on his mission and do it in unity.

So what do we do in the face of these facts? Well, I will say what I say every year.

First, we must rally around the reason we cooperate in the first place, namely the mission of God and partnership though our theological consensus. We have every advantage of the modernized world to be a multi-dimensional family of churches. Yet, we often find ourselves at odds with one another over issues that fall within our denominational confessional consensus. Another battle means more causalities and departures.

Second, we must engage new leaders. Every week, you and I meet new leaders from differing generations and differing ethnicities. It is our privilege to encourage them and learn from them. There is no need for the pendulum to simply reside on one side of the spectrum or the other. We do not need to simply be paternal to those who are new to leadership in our ranks. Nor do we need to completely abandon all of our places of leadership just for the sake of "new blood" and "new voices." Rather, we have the privilege to partner with new leaders, young leaders, ethnic leaders, and leaders who've been around a while who want to partner with us through the Cooperative Program and in accordance with the Baptist Faith and Message. 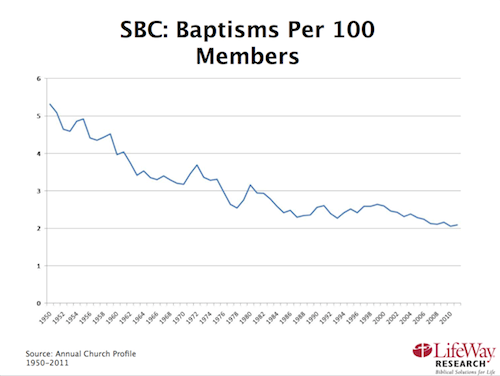 We also need more churches. The numeric increase of SBC churches from 2010 to 2011 was only 37. Not even a full percentage point. We need to fill the growing void created when churches close yet the U.S. population continues to expand. Church planters are a gift to the convention, and we need to prepare, partner, and commission them at every turn. Considering planters as competitors in our communities was never wise. It is time for us to move on from the such attitudes and partner with them for kingdom impact in our cities.

We stand at a key moment and my sermon-in-a-sentence is this: A denomination perpetually at war with itself cannot survive, but a denomination focused on engaging new leaders, reaching out to other ethnicities, and reaching others through evangelism and church planting will thrive.

In the face of these statistics, I am still encouraged. I hear more and more people talking about mission, having the important conversations to get us focused there, and a desire to be a convention of churches God has called us to be. I trust that will be reflected in New Orleans--we can pull together, join God on mission, and be the convention God has called us to be.

Join the conversation on Facebook
Tags:
None
Posted:
June 13, 2012