Gallup released new research yesterday on religiosity in America. Gallup's Religiosity Index is based on the importance of religion in the everyday lives of Americans and the data was taken from daily tracking polls throughout 2011.

These numbers should come as no surprise to us. There has been little regional change in religiosity throughout the past few decades. In our lifetime, the South has always been seen as the Bible Belt. New England and and the West have predominantly been less religious states.

While many may lament the irreligiosity of much of the nation, we should be encouraged about the work God is doing through the local church and denominations in states shown to be less religious. My denomination refers to many of these states as "frontier states" and has made a concious effort to provide more resources and church planters in both the West and New England.

There are many stories like that of Jared Wilson, who migrated out of the Bible Belt to a less religious area for the sake of the gospel. Jared left his church in Nashville three years ago to pastor a small church in rural Vermont-- the least religous state in America. He'd be the first to admit the soil is hard in New England. But he'd also be the first to proclaim the power contained in the gospel plows even the hardest soil like a hot knife through butter.

Yes the stats are alarming-- and they should be. But know that there are faithful men and women of God proclaiming the gospel to a dying world in these areas. And they would covet your prayers-- and your help. 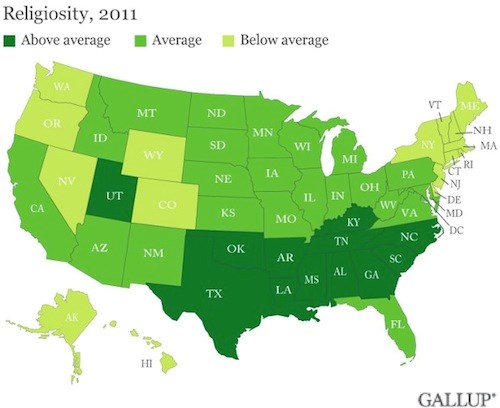 Join the conversation on Facebook
Tags:
None
Posted:
March 30, 2012