One of my students last week at Trinity Evangelical Divinity School was missionary John Mehn. John is in an a unique missionary role in Japan in that, although he is a Converge Worldwide missionary, most of his time is helping to connect and serve other missionaries from a variety of denominations. He leads what is called the Japan Church Planting Institute, something I had the privilege of speaking at a few years ago. (If you are interested in coming with me on a trip to Japan in May, see the end of the post.) 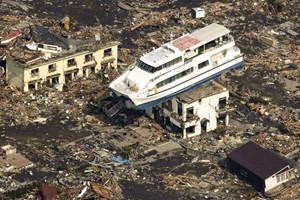 John shared with me a bit about the spiritual aftershocks of the earthquake a tsunami that took place one year ago today. He has been a missionary to Japan for over 25 years-- a hard field that he knows and loves well.

If you have not already you will hear a lot in the news about the recovery efforts after the triple disasters in Japan last March 11th. Much has been done but this is a 10 year project to rebuild the 86 communities affected in the greatest disaster for Japan since WWII.

From a Christian perspective of missions- Japan has even further to go. Before 3.11, for the Church of Jesus Christ Tohoku was hard very difficult soil for the Gospel. The difficulties are revealed by the statistics. I blogged this a year ago: The areas affected by the earthquake and tsunamis of Miyagi, Fukushima, and Ibaraki are some of the most spiritually needy places in Japan. With over 4.9 million people yet only about 9,000 active Christians (about 0.15%). There are one city and 44 towns with no church. One town in Ibaraki has over 46,000 people with no church and several others have over 24,000 people with no churches. Average attendance for all the churches in Japan is the lowest (only 19) in Fukushima prefecture. Ibaraki prefecture has the least number of people claiming to have any religious beliefs.

Current Encouragements- Throughout the Christian relief efforts we would hear stories of Christians ministering being termed Kirisuto san (Mr. Christ) by victims receiving help. Some would say "I got this food/clothing from Jesus." This illustrated that the incarnational approach of Christians meeting real needs have made Christianity to be seen in a great light. In some cases Japanese have overlooked some other answers such as Buddhist cults or the communists. The wall between the church and the community has disappeared, local churches and believers are now visible to Japanese. Churches are gradually springing up all over the area. In Ishinomaki the number of churches has increased from 7 before 3.11 to now 11.

Last Christmas my wife and I sat with many disaster victims we had been helping. We came to share the story of Jesus. We had never experienced more openness in our 26 years of working in Japan. The traditionally hard soil has been loosened in a country of less than 1% labeled as the second largest unreached people group in the world.

Future Challenges - The often used word since the disaster was "overwhelmed." The challenges of recovery are still staggering, yet for the Gospel of Jesus Christ even more so. There has been much progress but are there enough Christians and churches to capitalize on this apparent openness? Who will plant the churches in the places that historically have never had a church? Who will help equip and support those who plant these new churches? Missionaries have declined in number by 25% over the last 8 years. Like General MacArthur after WWII, we need to make a great appeal for missionaries to head to Japan right now.

Please pray more fervently, and work more diligently that God would send out workers into his harvest field (Mt. 9:37-38).

I will be taking a group of pastors and leaders to Japan in May, leading a conference on church movements, and preaching at Tokyo Baptist Church. You can get information here (select the East Asia trip). We have one slot left and then we can add your name to the waiting list.

Thanks to John for serving faithfully for so long in a challenging place.

Join the conversation on Facebook
Tags:
None
Posted:
March 11, 2012