Thursday is for Thinkers: Jenni Catron

PREVIOUSLY
Juan Sanchez, pastor of High Pointe Baptist Church in Austin, Texas shared on how he was witnessed God's manifold wisdom through his service at a church composed of a diverse group of peoples from various ethnicities and cultures living together as one family. 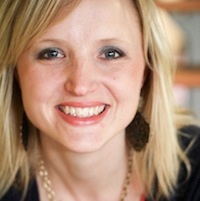 TODAY
Please welcome Jenni Catron to the blog. Jenni serves as the Executive Director of Cross Point Church in Nashville, TN. She leads the staff of Cross Point and oversees the ministry of its five campuses.

Jenni's passion is to lead well and to inspire, equip and encourage others to do the same. She is the founder of Cultivate Her, a community whose purpose is to "connect, engage and inspire" women leaders. She speaks at conferences and churches nationwide, seeking to help others develop their leadership gifts and lead confidently in the different spheres of influence God has granted them.

Jenni will be stopping by the blog today to answer questions and interact in the comments, so be sure to leave a comment or question for her below.

I recently came home from a particularly long and stressful day at work. All it took was a well intended "how was your day?" inquiry from my husband to trigger an emotional explosion that I would instantly regret. I didn't even realize it was coming. A decision I was facing was wearing on me much more than I realized, and as I let go of all I was holding in I startled myself and probably my husband (although he played it very cool). I let go of some of the leadership fears I was stuffing inside, and given the force with which they came out, I'd apparently been stuffing for a while!

That little explosion was a reminder to me that leaders aren't always the popular ones. That's really what I was mad about. I needed to make a decision that wasn't necessarily popular, but I knew in my heart it was right and it was the best thing for our organization at the time.

As I observe what gets celebrated in leadership circles today, I fear that leadership tends to be portrayed as more glamorous than it really is. I see more leaders celebrated for being in the spotlight than I see them recognized for being in the trenches. The real work of leadership happens in the behind-the-scenes places, doing the hard work that makes others succeed. They are rarely the acknowledged heroes until well after their leadership is done.

Leaders lead people to accomplish things they are generally afraid of doing on their own. They call us to greatness, but oftentimes it's accompanied by perseverance and trial. Great leaders are okay with making people uncomfortable because they see the payoff the average person cannot see.

One of my favorite leaders from Scripture, whom I believe displays great strength of leadership character, is Deborah. In Judges chapters 4 & 5, we get a glimpse of Deborah's leadership as prophet, priest, and judge of Israel during a season in which the Israelites were under severe persecution from the Canaanites. The story picks up with Deborah telling Barak, the leader of the Israelite army, that God has directed him to lead 10,000 men to take on the Canaanites, and God would give them the victory. One of the most important nuances to this story is that the Israelites were essentially defenseless. The Canaanites had stripped them of all their weapons and persecuted them for 20 years. Their hope of victory was pretty slim.

While scripture doesn't give us a lot of the details, I have to imagine this was no easy leadership sales pitch for Deborah. Convince Barak, the leader of the army, and 10,000 men that this is what God was asking of them? I'm not so sure I would be ready to blindly trust her discernment in hearing such a directive from God. But believe they did, and off to battle they went! The result? The victory God promised and 40 years of freedom for God's people.

I'm guessing Deborah was not so popular among the Israelites in those early days of questions, doubts, fears, and insecurities. It was a life-or-death decision for each of them. But somehow Deborah led through those fears. She calmed their doubts and assured them of God's promise.

Rather than being concerned about her popularity in the moment, Deborah displayed three key qualities I believe are essential for "in-the-trenches" leaders:

"In-the-trenches" leaders are rarely popular in the moment.

I believe our best leaders today may not be the ones speaking at all the conferences, writing the latest books, or spending their time with social media. They're the leaders focused on leading in their daily context.

What does your leadership look like? Do you get discouraged by the tough decisions or by the obscurity of being in the trenches? Personally I believe God develops the best leaders in the trenches when we are actively leading and hearing God's direction there. Embrace your time in the trenches as an opportunity to develop the confidence, consistency, and commitment that are the markings of a great leader!

Join the conversation on Facebook
Tags:
None
Posted:
March 29, 2012

Thursday is for Thinkers: Jenni Catron