I am in João Pessoa, in the Northeast or Brazil right now. LifeWay Research is partnering with Cidade Viva as we do the research for Transformational Church Brasil. I presented some initial findings at the EC4 Conference.

Here is a pic of the conference: 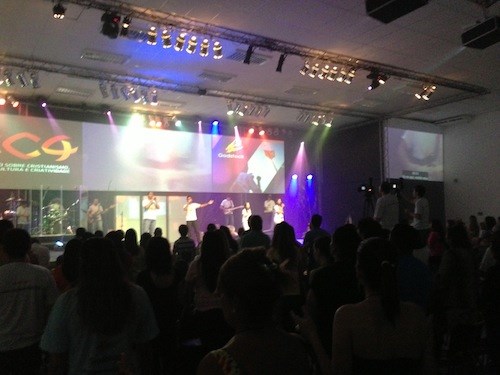 The focus of the conference was on the Kingdom of God and transformation. We are currently undertaking a research project on the church (and the unchurched) in Brazil, and I am excited about the things we are learning.

After the conference, we participated in a city festival. I will share more about this on an upcoming edition of The Exchange. The event is part of a month-long season of mission and ministry. Over 60 service and ministry events are planned in November, focusing on diverse options from reaching out to prostitutes, visiting prisons, and serving widows and orphans. Then, the final event, is the GodStock festival-- that starts with a very big party bus-- basically speakers with wheels. 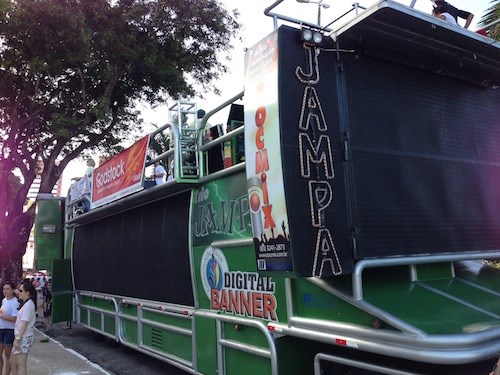 The band (and guests like me) got to ride on the top of the bus. My job, it appears, was to wave at people. ;-) 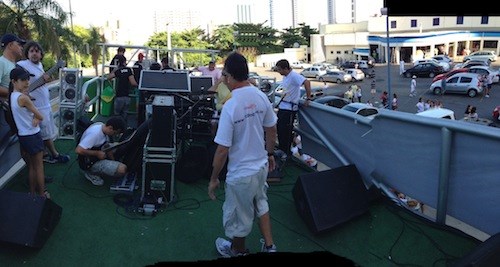 The bus leads a "march" through the city. The pastor describes the march as a "prophetic act," declaring their love for the city and showing the love of Christ (keeping in mind that this culminates a month of service). The local TV stations cover the event, but it is hard to miss.

The pastor explained that this is not a "March for Jesus," which is common in Brazil. Rather, this is a "March because of Jesus-- and His love for the city." 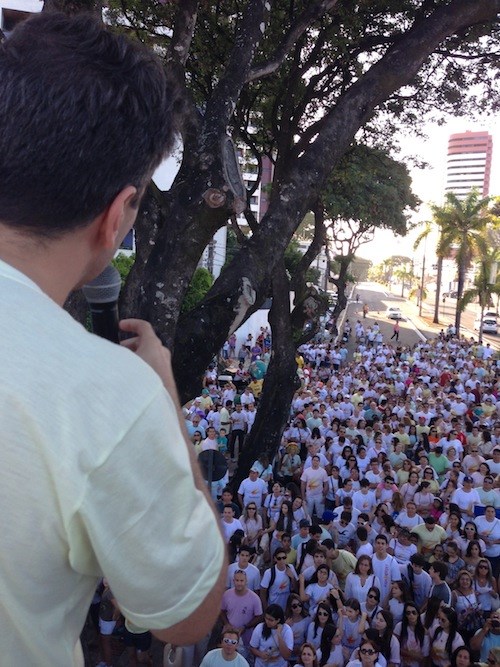 The crowd grows as we walk and members of the church join as we walk. 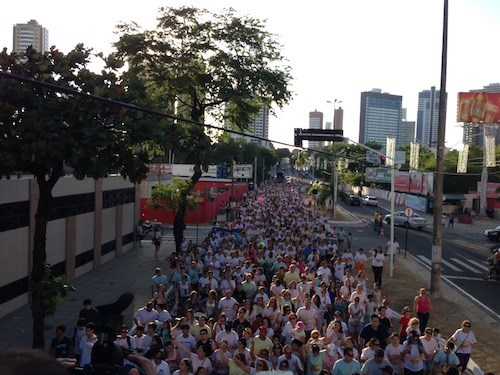 And, I have to point out, it is not just a quiet walk. As you can see from the video, it is a time of worship, celebration, and declaration.

One of my favorite parts of the party bus is that it did not always fit under the electrical wires and stoplights. Here is a pic of us avoiding a high voltage line, and I tweeted about the time the bus and the traffic sign had a disagreement. 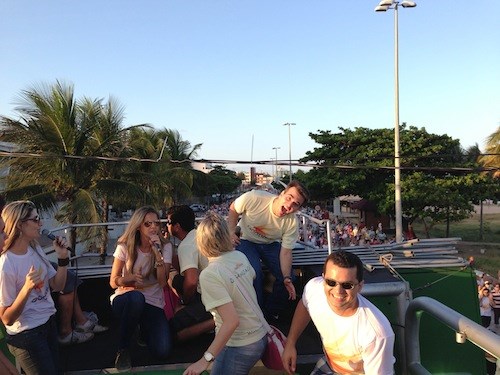 When we got to a key interchange, we stopped and raised our hands to pray for people in the buildings that surrounded us. That was a key part of what we were doing. They had served the city for a month, now they were praying for it... and inviting the city to celebrate with them 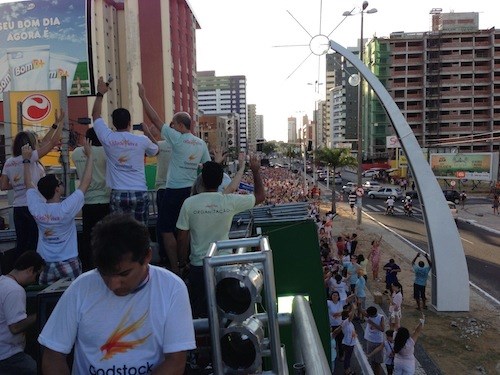 People in the cities came out and responded to the march-- which was pretty fascinating to me. I can tell you, the response would have been different than say in Boston, where I was last week. However, people seem more open here-- the door is open for the gospel. 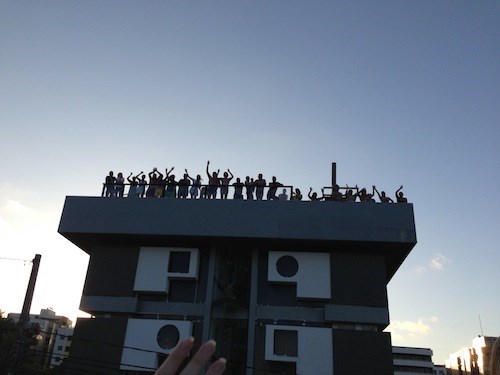 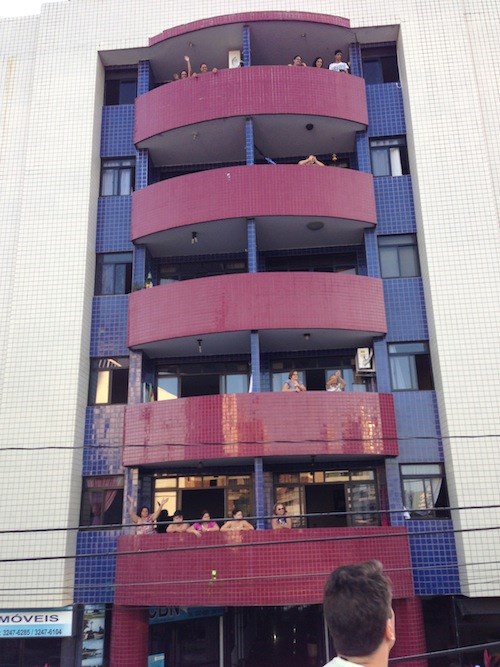 Then the growing march continued on. We stopped again a little later, lifted our hands toward, and prayed for Africa. João Pessoa is the closest point in the Americas to Africa and there is a linguistic connection.

We also prayed for Europe, which has a close connection, particularly through Portugal. (Interestingly: Brazil was once the capital of the Portuguese Empire (called then the Empire of Brazil) 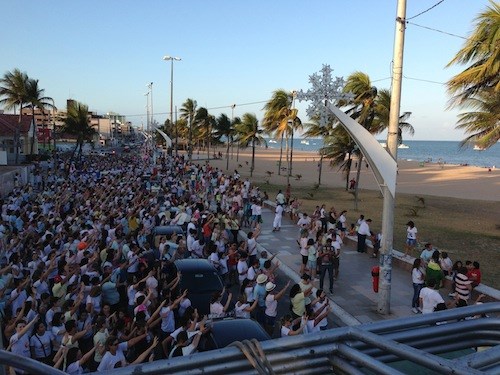 We ended with a beach outreach event with music, speakers, and ministry. Between the concerts on Saturday (and then Sunday) several of us shared the good news of the gospel. 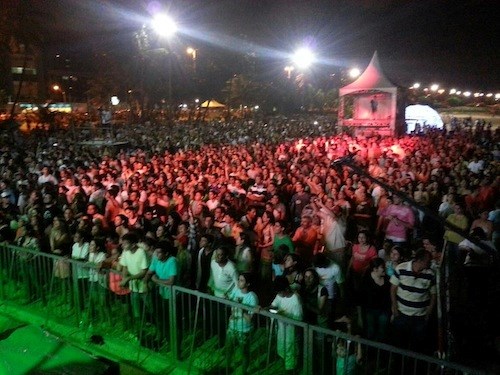 After I spoke last night, I went to the end of the crowd and took this picture using the panorama function on my iPhone (click the photo to view full size).

It was a powerful event, finishing up a month of impactful ministry. I am thrilled that LifeWay Research is in partnership with Cidade Viva and pastor Sergio Queiroz.

We look forward to the research being completed and shared!

Join the conversation on Facebook
Tags:
None
Posted:
November 19, 2012