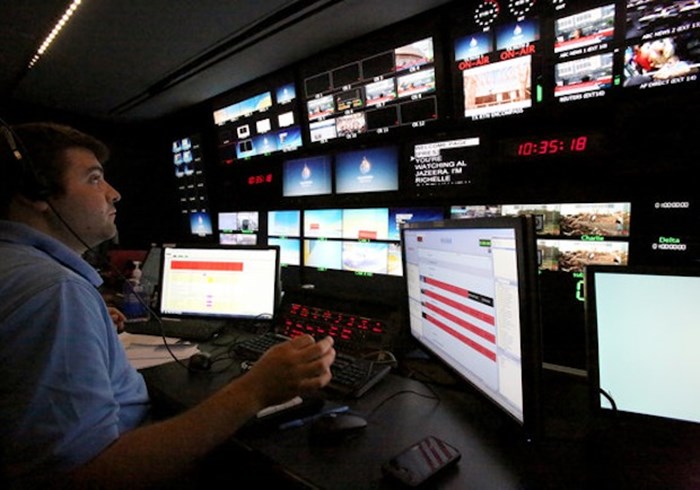 If you've traveled much internationally, you've probably seen Al Jazeera. I was watching the channel recently in my hotel room in South Africa.

I'll be in studio for an hour Thursday night, talking about religion in America, live from their D.C. studio. I'd love for you to engage in the conversation, and I will share more over Twitter. But, for now, the channel is available in 48 million American homes and you can find more here: http://america.aljazeera.com/. I'd value partipciation your at 7:30 p.m. Eastern, Thursday night on The Stream.

Fourteen hours of straight news every day. Hard-hitting documentaries. Correspondents in oft-overlooked corners of the country. And fewer commercials than any other news channel.

It sounds like something a journalism professor would imagine. In actuality, it is Al Jazeera America, the culmination of a long-held dream among the leaders of Qatar, the Middle Eastern emirate that already reaches most of the rest of the world with its Arabic- and English-language news channels. The new channel, created specifically for consumers in the United States, will join cable and satellite lineups on Tuesday afternoon.

Al Jazeera America is the most ambitious American television news venture since Rupert Murdoch and Roger Ailes started the Fox News Channel in 1996. It faces some of the same obstacles that Fox eventually glided over — including blanket skepticism about whether distributors, advertisers and viewers will give it a chance. But that is where the parallels to other channels end, because Al Jazeera America is going against the grain of seemingly every trend in television news.

"Viewers will see a news channel unlike the others, as our programming proves Al Jazeera America will air fact-based, unbiased and in-depth news," said Ehab Al Shihabi, the channel's acting chief executive, on a news conference call last week. He was explicit about what will be different, saying, "There will be less opinion, less yelling and fewer celebrity sightings."

Mr. Al Shihabi and other Al Jazeera representatives say proprietary research supports their assertions that American viewers want a PBS-like news channel 24 hours a day. Originally the new channel was going to have an international bent; now its overseers emphasize how much American news it will cover and how many domestic bureaus it will have, which some see as an effort to appease skeptics.

Would-be competitors at big broadcast news divisions like NBC and established cable news channels like CNN have mostly shrugged at the start-up. A senior television news executive predicted that Al Jazeera America would, at the outset, receive even lower ratings than the channel it is replacing, Current TV.

Here's an interview I did with Leadership Journal. You can also read my guide to getting started.

Ed Stetzer is best known as a church researcher. He's a missiologist, church-planter, and president of LifeWay Research. But in recent years, he's added a new line to his bio: social media maestro. With a well-trafficked blog and large followings on Facebook and Twitter, Stetzer has expanded his ministry through these new platforms. Drew Dyck and Kyle Rohane of Leadership Journal sat down with Stetzer (physically, not virtually) to talk about his experiences with social media, the implications they have for ministry, and why he jokes that pastors who aren't on Twitter need to repent.

How did you get started with social media?

I wasn't a pioneer, that's for sure. I don't like to jump on a fad. Facebook I knew, but once I saw Twitter getting some traction, I asked a couple of friends what it was all about. They said, "Let us set you up!" And so—I sound like my grandfather here—they started an account for me. I did it really poorly for about two weeks. I was tweeting stuff nobody cared about. And I was tweeting seven times in 10 minutes. People were like, "Stop!"

So since I'm a researcher, I decided to study up on it. I read about best practices. For instance I learned that the most followed accounts tweet approximately 12 times a day. I also listened when people said, "This is why I'm not following you."

Are you surprised at how large a role social media has come to play in your ministry?

Absolutely. It's easy and efficient. When I speak somewhere, I have to fly there (usually a day early), speak, fly home, and it takes a day to get back. But I can write a blog post in 30 minutes and have five thousand people read it that day. So it's definitely changed the way I see my ministry.

I am shocked by the conversations I have with people. Anywhere I go now, people will ask me about something they read from me online. I was in Brazil and I had people talk to me about what they read on my blog. I started blogging I think in 2007, and I'm surprised how it has become such a primary means of communication.

My friends at LN are off on another survey. Take a look.

Leadership Network is offering you a chance to win a $250 gift card if you'll tell us what you are learning from being part of a multisite church. We'll award a $250 (USD) Amazon.com gift card to six randomly selected individuals who complete the survey. (If you're a winner, we will email you when the survey closes.)

Plus, as soon as you complete the survey you'll be directed to "Multisite: The Next Decade", a series of blog posts featuring discussions by multisite churches and leaders on what the next ten years will bring for the movement.

Also, after this survey is tallied, we'll send you a free summary of what others said.

With your help, the following can become the largest survey of multisite churches ever conducted. It may also be the first to compare the multisite movement internationally. Recent years have seen an explosion of multisite churches globally – in the U.S. alone over 5,000 churches now identify themselves as one church in two or more locations. There is much to learn from each other!

This survey is for churches of all sizes, that identify themselves as one church in two or more locations.

Our goal is to receive ONE survey response per church - so before you begin, please be sure that you are the best person at your church to answer questions about attendance growth (at all campuses), launch history, multisite strategy, spiritual development, etc. for all your locations.

If you are not the best person to take this survey, please forward this survey to the appropriate person by emailing them this link: https://www.research.net/s/globalmultisite