Perception of Christians; Center of the Church; the IRS and Religious Freedom; Luis Palau
Ed Stetzer 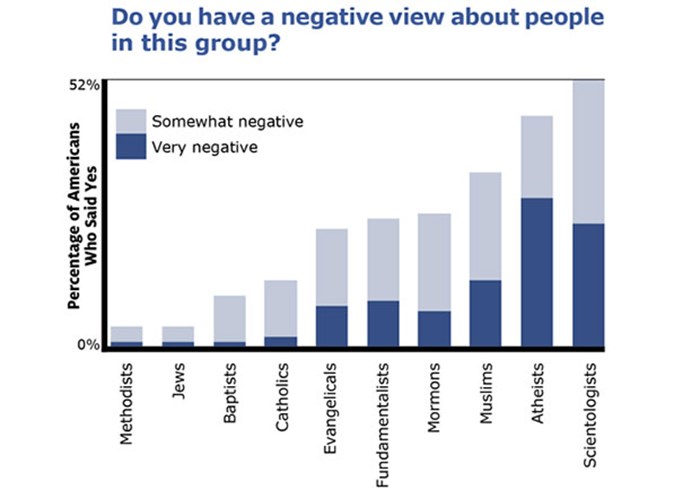 Here's a look back to an August 2011 cover story for CT in which Bradley Wright explains how—contrary to many presumptions—Christians in general, and evangelical Christians in particular, are actually well-regarded in the US.

In 2009, the Pew Forum on Religion and Public Life surveyed Americans on, among other things, discrimination in the United States. Evangelicals agreed with Americans overall that Muslims in America face a lot of persecution (58 percent of both groups said yes). But evangelical respondents identified themselves as the second-most-victimized religious group, with 43 percent saying there's a lot of discrimination. This ranked discrimination against evangelicals as worse than that against Jews (38 percent), Mormons (26 percent), and atheists (24 percent)—and blacks (37 percent) and women (38 percent). Among the general population, however, only 27 percent agreed that American evangelicals face much discrimination.

Why do American evangelicals feel this way? One possible answer comes from the work of Christian Smith, a sociologist at the University of Notre Dame. In a landmark three-year study published in the mid-1990s, Smith and his colleagues sat down with 130 churchgoing Protestants to talk with them for a few hours about their religious behaviors and beliefs. Time and again, the interviewees had stories of unfair treatment at the tip of their tongues, especially stories involving schools, government, and the media. One woman complained that "schools have completely removed anything that has to do with Christianity or God or the Bible or any of that. And then they will let in books like Heather Has Two Mommies, real secular and anti-moral books." Another woman lamented that "Christians are mocked and made fun of by mainstream America. I have even experienced that opposition personally from friends, in subtle ways, thinking me very odd to prefer to go to a church activity over a movie."

Smith concluded that the perception of conflict makes the movement strong and distinctive. Evangelicalism, he wrote, "thrives on distinction, engagement, tension, conflict, and threat"—hence the name of his book: American Evangelicalism: Embattled and Thriving. In fact, said Smith, if we take away the tension evangelicals feel, the movement "would lose its identity and purpose and grow languid and aimless."

Ray Ortlund shares this excerpt from Randy Pope on what churches should centered on.

Where is your church's X? -- Randy Pope

Think of a continuum on which the left end represents an extremely effective 'home' function of a church, and the right end represents an extremely effective 'mission' function. After journaling these thoughts, I decided to evaluate the church I pastor in light of this continuum. Believing a healthy and balanced church would find its X placed in the center, I had to honestly admit that our X was placed well left of center — being far more effective as a home to God's people than as a mission to the unchurched.

Through the years, we have had numerous people leave our church feeling that their needs as believers had not been met, and frankly, many of them had legitimate complaints. Yet what grieves me the most is that never during those years has anyone so much as complained about our ineffectiveness as a mission. Many have left for personal reasons; none have departed because we failed to care for the lost. When have you ever lost a member because your church was failing to effectively reach the lost?"

The federal government has no business punishing pastors for what they preach, says a high-profile commission that is calling for the IRS to dump a 1954 policy barring clergy from endorsing political candidates.

The current rules for churches don't work, and the IRS isn't enforcing them anyway, the group of church leaders, nonprofit leaders and legal experts said.

The IRS ban hasn't kept preachers like the Rev. James "Tex" Thomas from speaking their minds about politics and candidates. He says that's part of a preacher's job.

But critics say all nonprofits — not just faith groups — are banned from endorsing candidates. It's part of the price those nonprofits pay for the privilege of being tax-exempt.

The Commission on Accountability and Policy for Religious Organizations gave its report to Republican Sen. Chuck Grassley this week. Grassley had set up the commission after a series of hearings into how the IRS regulates churches and other charities. He is currently reviewing the proposal, said a spokeswoman for his office.

Michael Batts, chairman of the commission, said the current rules are not enforceable. There's too much ambiguity, he said, and many pastors ignore them without consequence.