Tongues and the Mission of God
Ed Stetzer 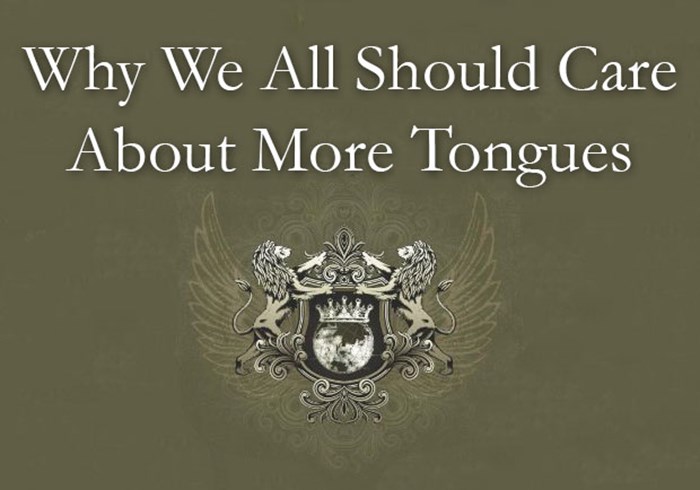 The subject of speaking in tongues is perhaps one of the most misunderstood and controversial topics found in the Bible-- and it is not my intent to settle everything here, but to point to what every Christian should embrace.

Despite the theological debates surrounding the idea of "tongues," everybody who loves Jesus must agree that we need more speaking in tongues. We should not let a debate about the gift of tongues keep us from pursuing people of all tongues.

In Spiritual Warfare and Missions: The Battle for God's Glory Among the Nations, Jerry Rankin and I discuss the tongues motif as one of the Bible's greatest missed themes.

Everybody who loves Jesus must agree that we need more speaking in tongues.

Between the tables of the nations and the genealogy of Shem to Abraham we find the account of the Tower of Babel. Some of us remember this story from our days in Sunday school. However, let me show you anew how this one narrative fits into God's larger plan in redemptive history for His glory. Remember that Genesis 11 indicates humanity was on a mission for their own power fueled by self-interest. At Babel we see collected humanity reaching for the dominion of God in order to make their own name greatly known.

Come let us build ourselves a city and a tower with its top in the sky. Let us make a name for ourselves; otherwise we will be scattered over the face of the whole earth.

What men meant for evil, God used for good. Humanity wanted to achieve unity apart from God, but in his gracious wisdom God stopped them by created different languages and dispersed them across the planet. However, despite the scattering of the people groups according to language God had a plan for unity amidst their diversity. Throughout the Old Testament God clearly directed His children to gather people from all tongues, tribes, and nations and bring them back to Jerusalem in order to praise to God. Did it ever happen? I believe so, but it happened through the work of Jesus Christ and His Spirit.

What men meant for evil, God used for good.

In the book of Acts we see a fascinating account of the Holy Spirit descending and sending tongues of fire to rest on people so that they may give praise to God in all different languages. Don't miss this, it all happens in Jerusalem. Moreover, a Pentecost the people who were scattered at Babel were represented in Jerusalem. In fact, every nation under heaven was gathered and heard Peter proclaim the gospel of Jesus Christ. Picture Acts 2:5,9-11 in your mind:

There were Jews living in Jerusalem, devout men from every nation under heaven…Parthians, Medes, Elamites; those who live in Mesopotamia, in Judea and Cappadocia, Pontus and Asia, Phrygia and Pamphylia, Egypt and the parts of Libya near Cyrene; visitors from Rome, both Jews and proselytes, Cretans and Arabs—we hear them speaking the magnificent acts of God in our own languages.

What do we see here? Essentially Acts 2 records the reversal of Babel. Instead of man reaching for the dominion of God, God comes to the dominion of man. In Babel we see man grasping for unity apart from God through their own strength and for their own glory. At Pentecost we see God bringing man together in unity for His glory through His gospel.

From Pentecost on, the mission of God's people changes, as noted in Matthew 28. Rather than bring people to Jerusalem, a centripetal mission, God's people are to go with the Holy Spirit. God's people were to leave Jerusalem and spread His praise to the nations, a centrifugal mission. Again, this is unlike Babel where the people built upwards to avoid being scattered outward. Jesus comes downward and sends us out His people to every tongue, tribe, and nation in order to proclaim the gospel to bring glory to God's name.

When considering the significance of tongues throughout the pages of Scripture, one may begin to wonder why God desires to hear His praise in every language. Why not just teach everyone Korean, the language of Heaven? Instead, He seems to desire strongly both an array of languages and praising lips from each one. In Revelation 7, readers discover that in eternity, it is not merely one voice that lifts its praise to Almighty God. In eternity, it is one voice in many languages.

God Himself created tongues and desires praise from all languages.

As believers we look forward to the day when people from every nation cry out with a loud voice: "Salvation belongs to our God who is seated on the throne, and to the Lamb!" Until then, let us be reminded that God is passionate about tongues. Because God Himself created tongues and desires praise from all languages, missional and linguistic contextualization becomes even more important.

I know that many will say, "But, but, but, what about...?" That's fine. And more needs to be discussed-- but this aspect must not be missed.

Christians must be concerned with reaching all ethno-linguistic people groups with the Gospel that Jesus' mission can be fulfilled: God's praises in many languages. Speaking in tongues illuminates a piece of Heaven here on Earth.