Religion has an undeniable place in the Australian story.
Ed Stetzer 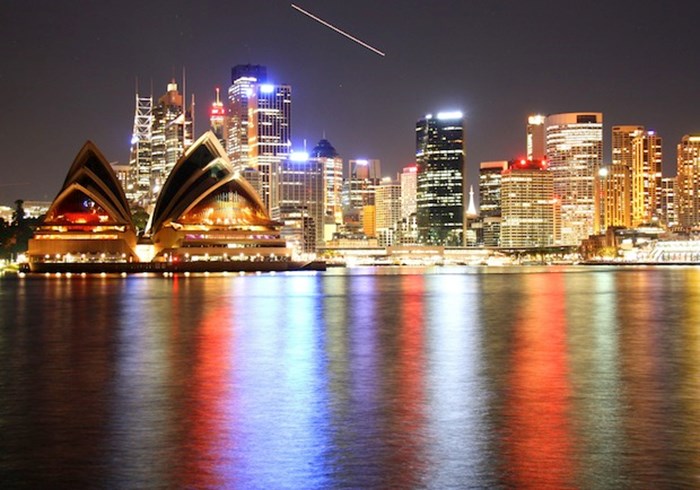 Can Australia be described as a Christian nation? This is the sort of question that I have been asked by people visiting from other countries. It sounds like a simple question, but there are different ways to answer it.

The first point to make is that Australia's indigenous people have been in this nation for around 60,000 years. They have a deep spirituality and sense of connectedness to the land.

A group of more recent arrivals to these ancient shores came from the United Kingdom in chains some 200 years ago. Some Christian clergy were part of the landscape as authority figures, which created a rocky start for Christianity. Since then migrant communities have continued to find their way to Australia, seeking a better life for themselves and their children, making it the second most multicultural nation in the world (after Luxemburg!). Many bring their religion with them.

In recent decades, Australia, like other western nations, has experienced extraordinary and rapid social change in recent decades. This changing social context has been analysed and described by philosophers, social scientists, theologians, artists and others. So what is the situation now? How much has it changed?

One helpful way we can think about the religious character of a nation is to use the framework of 'belonging, believing and behaving'[i]. Here are a few summary indicators based on this framework to demonstrate the extent of change between 1991 and 2011.

One measure of religious 'belonging' comes from the Australian National Census, run every five years. People are asked 'what is your religion?' This doesn't tell us whether they are practicing Christians, but it does tell us the proportion of the Australian population who affiliate themselves with a Christian denomination or group. Maintaining this as part of one's identity is a form of belonging.

At the turn of the century in 1901, nearly every Australian claimed a Christian affiliation or identification (96%). By the most recent Census in 2011 this figure had declined to six out of ten Australians (61%). In the past two decades from 1991 to 2011, there has been a decline in Christian identification from 74% to 61% (see Figure 1). 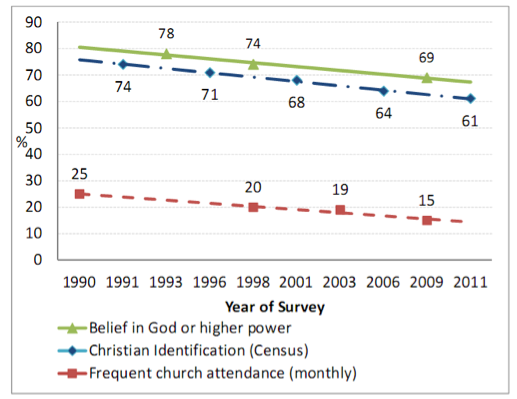 Believing: belief in the existence of God or a higher power

A second way to think about religion in Australia is to find out about people's religious beliefs.

Over time, various sample surveys of the Australian population have asked a question about whether people 'believe in the existence of God or some kind of higher power'. Around seven out of ten Australians do claim to hold this belief. However, it has declined from around 78% in 1993 to 69% in 2009.

A recent survey that asked about church attendance found that 15% of Australians go to church at least once per month[iii]. We call this group 'frequent church attenders'. This overall percentage has been declining since the 1950s – which was likely to be the high point in Australian church attending history. Figure 1 shows that this longer term trend of overall decline in church attendance has continued in the two decades since 1991.

It is important to note that not all parts of the Church are in decline. In every faith tradition and in every context, there are growing churches or movements, such as Pentecostal churches. However, this growth is not enough to counter the overall net effect of decline.

So, is Australia a Christian nation? I would have to answer 'yes, but…'. Yes, most Australians claim to belong to a Christian faith tradition. Yes, most Australians say they believe in God or a higher power. Fifteen per cent are frequent church attenders. But…the trends have all been downward – particularly in recent decades. So, many Australians may not feel comfortable with this description. To describe Australia as a Christian nation, does not acknowledge the rich and ancient Aboriginal spiritual heritage. It does not recognise the small, but growing proportion of people of other faiths. It also does not acknowledge the increases in those who claim to have 'no religion' – a group that has more than its share of younger Australians.

Religion has an undeniable place in the Australian story, and Christianity plays a significant role in the history and current experience of its people.