The Explosive Growth of U.S. Megachurches, Even While Many Say Their Day is Done

One of the more popular series last year on the blog dealt with the question "Can Megachurches be Missional?" It was part of a continuing-- and important-- dialogue within the Christian world.

Several people have written and researched at length the trends found in megachurches. Whether it is our LifeWay Research/Outreach Magazine list of the 100 Largest Churches in America or John Vaughan's helpful research, Elmer Towns' articles for Christian Life, or what Warren Bird and Scott Thumma are researching, megachurches are of interest to many.

The fact is that many practices found in smaller churches trickle down from larger ones, but also because we are a numbers-oriented culture-- we want our church to grow, so we try to copy what the growing churches are doing.

While imitation is often the greatest form of flattery and many copy their methods, their terminology, and their programs, megachurches tend to face scrutiny-- some fair and some unfair. In the process, several unhelpful things are said about them either out of jealousy or ignorance. One piece of misinformation spread about megachurches is that they are a dying breed.

I have heard this over and over again-- that the megachurch is dying out. That people are wising up and getting into organic churches. That the mindless robots who blindly follow a the charlatan megachurch pastor have seen the light. The day of the megachurch is done.

One problem: the claims are just not true (and some of it is quite insulting to many passionate believers who attend megachurches who actually have higher levels of involvement and service according to the best research).

Facts are our friends-- and we need some here. And the fact that Christians are choosing megachurches-- and megachurches are thriving-- is not a matter of debate, it is simply a matter of math. (This is not to say that there are issues to consider, but it is helpful to get this fact straight.)

So, the number of megachurches is not declining. Recent analysis from Scott Thumma and Warren Bird show the opposite, actually. There are more megachurches every year, not less. And, they have exploded in number in the last few decades. 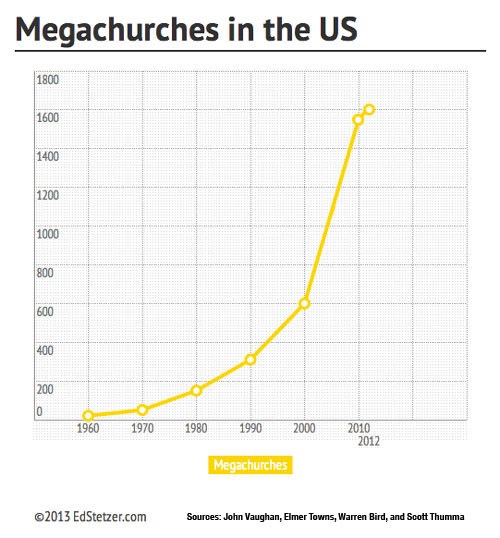 You are entitled to your opinion about megachurches, but not to your own facts. The fact is, they are not going away. Instead, they keep coming.

The graphic might show a slowdown in the last two years from the explosive growth (from explosive to electric?) we saw over the past decade, but Warren and I don't think so (yet). Two years does not make a trend, and the trend is quite remarkable when it comes of the number of megachurches.

Now, I don't think that every megachurch is good-- I assure you, I think some are quite terrible and fulfill every stereotype out there. Yet, there are also some great ones, and for that I am thankful. I want to understand them more and, when possible, to encourage them on their journey.

We are actually considering some learning communities (with D.Min. credit available) for megachurch pastors who want a peer group to considering that question. More soon on that, but for now... you have the facts.

For more information on megachurches and many of the stats cited in this article, visit Leadership Network's megachurch resource page.

Join the conversation on Facebook
Tags:
None
Posted:
February 19, 2013

The Explosive Growth of U.S. Megachurches, Even While Many Say Their Day is Done

The Explosive Growth of U.S. Megachurches, Even ...