Following President Obama's affirmation of same-sex marriage in May of last year, LifeWay Research released data showing the public was split on the issue of whether homosexuality was a sin.

Today we have released new, updated data showing the percentage of Americans who believe homosexuality is a sin has decreased significantly over the past year. There is little doubt that the President's evolution on homosexuality probably impacted the evolution of cultural values. This is a real and substantive shift, surprisingly large for a one-year timeframe-- though this was hardly a normal year on this issue.

A November 2012 survey of adults in the United States found 37 percent affirm a belief that homosexual behavior is a sin - a statistically significant change from a September 2011 LifeWay Research survey asking the same question. At that time, 44 percent answered, "Yes."

The November 2012 survey also reveals Americans in the South (40 percent) are the most likely to select "Yes" to the question "Do you believe homosexual behavior is a sin?" as are Americans who attend religious services at least about once a week (61 percent), and those calling themselves "born-again, evangelical, or fundamentalist Christian" (73 percent).

Americans who never attend religious services are the most likely to say they do not believe homosexual behavior is a sin (71 percent).

The issue at hand is an important one for many reasons. First, as I mentioned in my last post, there is a sizable minority in the United States holding to traditional religious beliefs. As I stated earlier today, this is also an important moment as Americans consider a simple question: are people of faith no longer welcome as they continue to hold the beliefs they have always held?

I believe the trajectory toward greater acceptance of homosexuality will continue. However, there will always be a sizable minority of people, often people of faith, who hold minority views. Increasingly, Americans will have to wrestle with how to be tolerant in more than one direction. 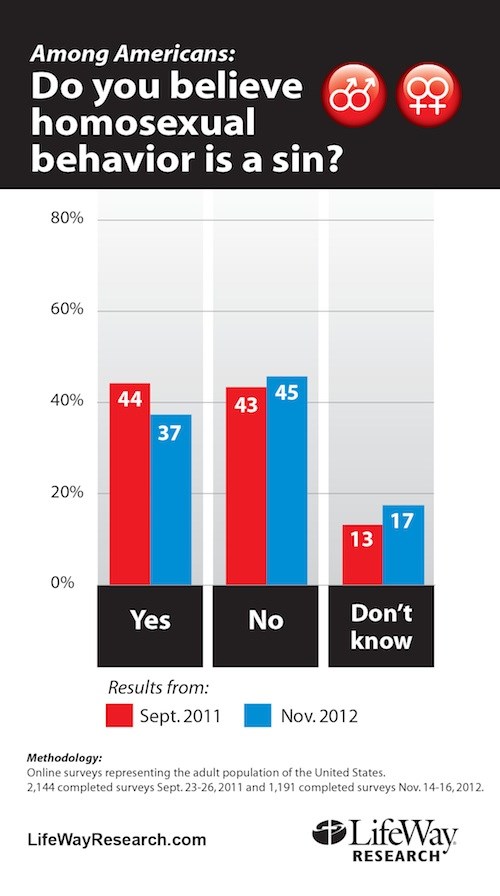 Join the conversation on Facebook
Tags:
None
Posted:
January 10, 2013