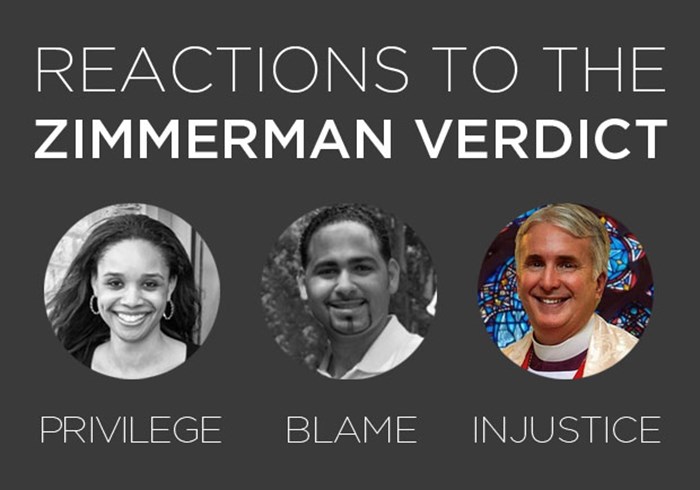 Gregory Brewer is the bishop of the Episocopal Diocese of Central Florida, an evangelical leader with a passion for justice. Two days into his role there, he was marching in Sanford in the aftermath of the Trayvon Martin shooting as part of a crowd demanding justice-- a surprising introduction to the new Bishop. He addressed the Sanford City Commission asking them to respond to the black community and was the only white member of the clergy to do so.

In light of the acquittal of George Zimmerman, I asked him to comment on why he chose to participate in this, and if the benefit of 20/20 hindsight changes his thoughts on that choice.

After only two days of serving as the bishop of the Central Florida Diocese, I found myself marching in the streets of Sanford, FL and speaking at city hall at a city commission meeting due to the developments following the death of Trayvon Martin. As a bishop, I am a Christian leader for a geographic region of 15 counties, not merely a group of churches. This meant I had to act.

The shooting of Trayvon Martin mattered to me because it mattered to the people under my care.

While my responsibilities extend to 87 congregations, the whole region and all of its citizens are within my spiritual oversight. What happened in the shooting of Trayvon Martin mattered to me because it mattered to the people under my care.

With the George Zimmerman trial resulting in an acquittal, from the outside it may be easy to assume that our march was not needed. Some might say that this verdict indicates we should not have voiced our concerns to the city council. But that doesn't tell the whole picture.

Due to the emergence of this case, the chief of the Sanford Police Department was forced to resign. There has been a clear pattern in the Sanford police department—a pattern of two levels of justice.

The Trayvon Martin incident was so explosive for the community because it followed a number of crimes against of black people, which were not investigated the same as those with white victims. This is a systemic issue.

The greater issue is one of equal treatment and equal justice.

It goes far beyond whether George Zimmerman was going to be convicted or acquitted. The greater issue is one of equal treatment and equal justice, which is why this was so important and why I was eager to participate.

Even with the result of the trial being as they are, I don't regret my participation. Because this went beyond the shooting of Trayvon Martin to a pattern of injustice, the demonstration was inevitable and my participation was entirely appropriate.

The issue is justice, not merely race. George Zimmerman is in my region as well. I care about him and his family. If the situation were reversed, I would have done the exact same thing for him.

Christians should see what can be gleaned from tragedies such as this, particularly when issues like justice and fairness are concerned. While the incident was horrible, there is much we can learn from it.

As followers of Christ, we need a deep understanding that in God's eyes everybody matters—regardless of race, age, education or economics. The compassion that God has for the whole world should be extended through Christians to people around us, not just those we like, or who are like us.

If we are committed to the Great Commission, then we should be asking, "Whom are we not reaching? Who is not being given the same kind of care and compassion that others are, and what can we do about it?" That is part of our witness to Christ.

As followers of Christ, we need a deep understanding that in God's eyes everybody matters.

This is what I hear when Jesus said, "I was hungry and you gave me food, I was sick and you visited me, I was naked and you clothed me, I was imprisoned and you came to see me." When I read the Gospels. I get the sense that Jesus was particularly interested in reaching out to people who were not favored by local governments or even the local religious institutions. That is one of the places where Christian ministry needs to be exercised.

The community of Central Florida is not accustomed to hearing white Christian leaders say, "Our concern is for the community as a whole, not just our personal congregations." I think that is a part of my responsibility as a bishop. That was one of the reasons that I was glad to be involved with the march, despite the horrific circumstances that led to it.

Especially as a new bishop, I want to set an example that part of the responsibility of the Christian leader is to take a public role. My hope is this will communicate the message that all our congregations should be centers of compassion and care in the life of community, rather than simply pastoral chaplaincies serving only those who show up at our doors.

No matter how you look at it, the shooting of Trayvon Martin was a great tragedy in our community. In situations like this, we are forced to ask what role we should play. I was faced with this decision two days into my role as bishop. Looking back today, I stand by what I did.