Privilege, Blame, and Injustice: Reacting to the Zimmerman Verdict 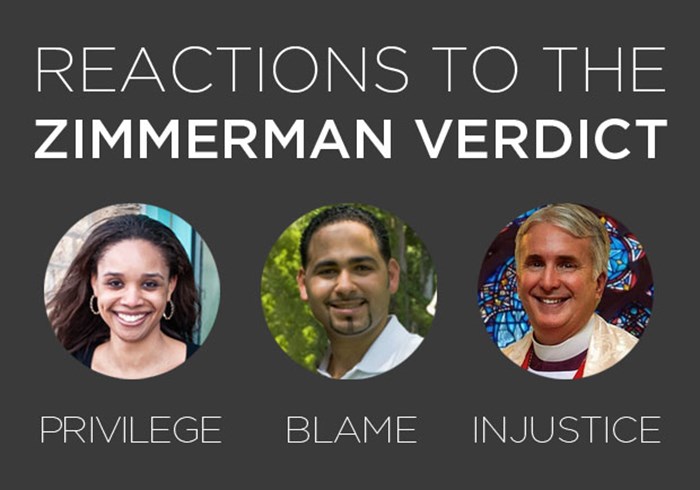 Since that fateful night in February 2012, we have watched and waited for a determination of what exactly happened between Trayvon Martin and George Zimmerman. While we may never know the details, a jury has found Zimmerman not guilty of murder or manslaughter. However no matter what the jury decided, the fact remains that a 17-year young man old is dead, his family is hurt, and a man's life has been turned upside down.

The focal points of the trial were certainly Trayvon Martin and George Zimmerman. But, in such trials, we learn about ourselves, our culture, and brokeness of our society. We learned that this society remains divided.

Certainly many issues were discussed, but three could not be missed: privilege, blame, and injustice.

So I asked three thoughtful leaders-- a scholar, a bishop, and a pastor-- to tackle these issues.

First is Dr. Christena Cleveland, a social psychologist with a hopeful passion for overcoming cultural divisions in groups. You can read her full essay here.

As America grows increasingly diverse, the realities of America are becoming more diverse. No longer can pastors and leaders assume that the people in their communities share their unique cultural experiences. In order to minister effectively, in order to be neighborly, in order to love across differences well, privileged Christians need to practice standing in solidarity with diverse people.

Pastor Victor Montalvo is the lead pastor at Reality Community Church in Sanford, FL, which is the closest church meeting just blocks from where Trayvon Martin was killed. He writes on how everyone from the families, to the police, to the media was looking for someone to blame. You can read his full essay here.

Finally, Bishop Gregory Brewer tackles the issue of injustice. Greg is the bishop of the Episcopal Diocese of Central Florida, an evangelical with a passion for justice. Two days into his role there, he was marching in Sanford in the aftermath of the Trayvon Martin shooting as part of a crowd demanding justice. He addressed the Sanford City Commission asking them to respond to the black community and was the only white member of the clergy to do so. You can read his full essay here.

The issue is justice, not merely race . . . Christians should see what can be gleaned from tragedies such as this, particularly when issues like justice and fairness are concerned. While the incident was horrible, there is much we can learn from it.

As followers of Christ, we need a deep understanding that in God's eyes everybody matters—regardless of race, age, education or economics. The compassion that God has for the whole world should be extended through Christians to people around us, not just those we like, or who are like us.

If we are committed to the Great Commission, then we should be asking, "Whom are we not reaching? Who is not being given the same kind of care and compassion that others are, and what can we do about it?" That is part of our witness to Christ.

Be sure to read the entire posts and, in some cases, the authors will be engaging in the comments.

Privilege, Blame, and Injustice: Reacting to the Zimmerman Verdict

Privilege, Blame, and Injustice: Reacting to the ...