Please welcome Justin Buzzard back to the blog. Last summer, I interviewed Justin about his book Date Your Wife, and today he returns for another interview about his latest project with Stephen Um, Why Cities Matter.

For those not familiar with Justin, he serves as the lead pastor of Garden City Church, a new church plant in Silicon Valley. He's a fifth generation Californian who has spent the last twelve years living and pastoring in the San Francisco Bay Area.

I've regularly said that to reach a city, you first have to love that city. Justin's book, and others on the theology of cities, will be increasingly helpful as our world continues to become more and more urban.

Justin will be hanging around the site today to answer questions and respond to comments. So if you have a question or comment, be sure to leave it in the comment section below.

What prompted you to write this book? 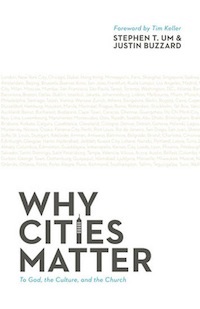 The fact that our world is changing. Right now, more people live in cities than at any other time in human history. In 1900 just 14% of the world's population lived in cities. Today that number has climbed to 52%. By 2050 the number is estimated to be nearly 70%. We want people to understand what is happening right now in our world and to think through how to thoughtfully engage our changing world with the message of Jesus.

Though the book is about cities, it's not just for "big-city" pastors. Who is this book for?

Typically people place sharp divisions between cities, suburbs, and rural communities. We argue that cities and their suburbs actually have a very close and interdependent relationship. So, first of all, we wrote this book both for people who live in cities and for people who live in other areas who want to better understand our increasingly urban world from a biblical perspective (Why Cities Matter has been receiving good reviews from urban, suburban, and rural readers). Second of all, we wrote this book for both Christians and non-Christians. The primary audience is Christian, but we also want non-Christians to discover how the Scriptures offer a compelling vision for the flourishing of our cities. Thirdly, we wrote this book for leaders and lay people in the church. We envision pastors, professors, and plumbers all benefitting from what we've written.

From your experience, why do cities play a crucial role in our culture?

There is so much to say here. In many ways we answer this question on every page of our the book. But, to put it simply: cities shape the world. What happens in cities doesn't stay in cities. What happens in cities spreads--as the city goes so goes the broader culture. Think of cities like you think of a factory. What is produced in the factory (city) gets shipped outside the factory and distributed throughout the world. The products shipped by the factory shape life far beyond the walls of the factory. Cities ship and shape. Cities are important because the possess a greater "shipping" and "shaping" power than any other human settlement.

Your research shows that in 35 years the world is likely to be 68% urban. What kind of challenges or opportunities does this present to Christians?

I see more opportunity than challenge. In the first, second, and third century the early church grew rapidly as the gospel was preached and churches were planted in strategic cities. We know that at the time of Jesus' Ascension there were about 120 Christians. By 100 AD there was significant growth, but still as few as 25,000 Christians. But by 310 AD there were up to 20,000,000 Christians. Much of this exponential growth was due to the city. The earliest Christians preached the gospel, made disciples, and planted churches in cities, the places where the most people lived and where the most influence could be exerted.

The one great challenge would be to ignore what's happening in our world (and thereby Christianity sits on the sidelines and gets increasingly relegated to areas outside of the city). If evangelicals stay put and do not track with our world's movement to cities, in 35 years our geographical statistics will be the exact opposite of the statistics of the rest of the world (we will be ~30% urban and 70% suburban/rural at the same moment that the world's population is ~70% urban and 30% suburban/rural). Obviously, that would not be good.

How do you define "contextualization" of the Christian worldview in the city?

People often complicate cities. Cities are simply large collections of people. You want to think about cities the same way you think about people: your job is to know and love. In order to love your neighbor you must first know your neighbor, then you can thoughtfully engage and love him or her. The wisest order of things is to listen first, speak second.

That's a start. There's much more in the book. But the key takeaway for this interview is to simply approach your city like you would a group of people. You city has a personality and you want to understand that personality in order to best present the gospel to your city. Good contextualization is mainly about good listening.

Join the conversation on Facebook
Tags:
None
Posted:
May 22, 2013