Caleb Kaltenbach, the pastor that took the viral photo of the fiction-labeled Bible at Costco, tells his story.
Ed Stetzer 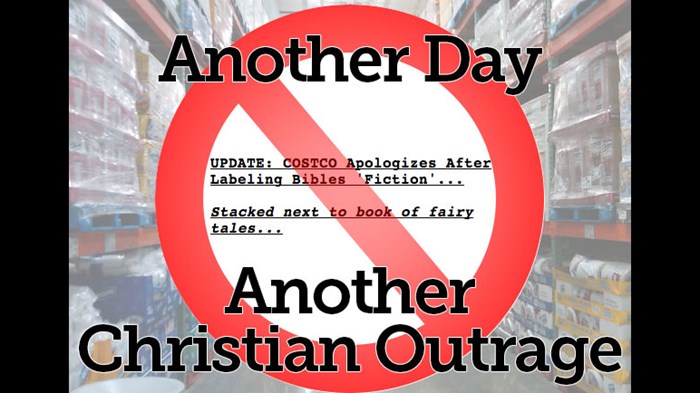 A pastor walks into a Costco.

He sees a Bible in the fiction section. He tweets a picture of it. It ends up on Drudge. Christians are outraged. Again.

Only problem: there was no need to be.

Another day, another faux Christian controvery with its obligagtory outrage. (I can list more if we need our memories refreshed, but I don't want to become the Christian version of Snopes.)

Flames of outrage were fanned to get pageviews. Christians were willing to scream on social media of this persecution once again.

Yet, oops, the CEO of Costco is a devout Catholic, and the pastor who posted the picture is not outraged. Of course, the obligatory Facebook posts (one of many) are calling for a boycott. Sigh.

It was a labeling error, not a theological statement. It's like when the sticker for the corn was accidentally put on the beans. It's a no-big-deal clerical mistake.

If you got outraged over a labeling mistake, maybe it's time to take a moment and ask if that's the best approach. Maybe it's time to ask if you need to be more discerning, less gullible, and need some new sources of information beyond constantly-outraged websites and social media outlets.

Let me add, when Christians are constantly outraged by fake controversies, we look foolish and have no credibility to speak into real issues.

It turns out that the pastor involved follows me on Twitter, so I asked him to share some of the story.

Caleb worked hard to seize the moment and try to get people to ask what they thought about the Bible and Jesus. My hope is that some did, indeed, ask that question. It's just a shame that the "Christian outrage machine" was turned on once again, not by Caleb, but by others with a different agenda.

Here's some thoughts from Caleb Kaltenbach, the non-outraged and quite reasonable (and funny) pastor of Discovery Church. I'm thankful for him... and wish a lot of other Christians took a similar approach.

My wife and I had attended our small group on Tuesday night of last week. We finished up a marriage series, and I learned that I wasn't communicating in her love language—most guys can relate! She snapped a photo of a jacket she liked at Costco, and so last Friday I went there looking for it. On my way out of the store, I was browsing through some of their books. I noticed the Bible was being sold and had a label on it that said "Fiction." As I checked, I noticed that all Bibles were labeled in that fashion. I went to find someone in the store and inquire as to why it was labeled fiction. Unfortunately, I couldn't.

Here's where it began: I took a picture and posted it on my Twitter and Facebook. I snapped the photo because I thought it was interesting and somewhat amusing (I had never seen a Bible labeled fiction, but religion, inspiration, gift, etc).

Let me be clear on this: I was NOT angry, outraged, offended, stunned, shocked, upset, gained a shattered worldview, or ________________ (you fill in the blank). I put the pic on my social media feed to EVERYONE, not just my "flock." It was then a couple of days later that I was approached by the press about the photo.

I tried to answer media/journalist questions as best I could, and there were some quotes that were taken out of context. I did some of the TV interviews for a couple of reasons: first, to show that I was not outraged or upset with Costco. Second, I will take any chance I get to testify about Jesus or create conversation on the Bible. In every interview I tried to point the people back to Jesus. I specifically said each time, "I do not think that Costco did this intentionally. I don't believe there's an evil mastermind genius working at Costco to undermine the authority of Scripture." Unfortunately, people hijack and spin stories so they can get their own view on the matter across. 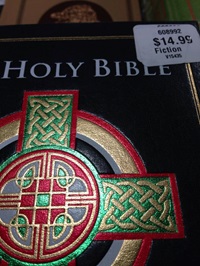 The response has been HUGE. I really don't think that this is about Costco as much as it is about God. Whenever you put the Bible in the spotlight, it will highlight people's love for His Word or their lack of faith in it. When people come face to face with the Bible, they are forced with decision...either it is true or it's not. We've certainly seen that over the past few days:

To me, most of the groups missed the main point of the issue: is the Bible fiction or is it true? There are some Christians who have to be mad at the next cultural event in our country. That's not me. I'm definitely conservative in my view of theology, but wouldn't consider myself a cultural conservative. As a matter of fact, our church, Discovery Church, prides itself on being a church for people who don't like church. We are very intentional in what we do in our worship services, community groups, family area experiences, and more to think of what "the unchurched" are thinking.

Because of our focus on being a church for people who don't like church—I think that the indifferent population that wanted to know what the big deal was came the closest to the kind of conversations that should have been spurred on by this situation. My sincerest hope is that many conversations will be had about the Bible and that people will start to consider the evidences for the reliability of Scripture. Maybe people will ask tough questions of Jesus and who He was. That would be a great win!

It was never my intention to crusade against Costco or their CEO (who is a devout Catholic). I'm not on the cultural warfare path by any means. I believe that if this story gets summed up by label stickers then the opportunity was missed and a shadow has been cast over the Gospel. If however, we can have good conversation and get some people thinking about God, then there just might be a party in heaven soon (Lk. 15:7).

Costco apologized for an error that was not theirs (and good for them for doing that). Now, I wonder if many Christians on social media will apologize to Costco.

Another Day, Another Faux Christian Outrage: ...