The Needed Balance Between Pauline and Johannine Missions
Ed Stetzer 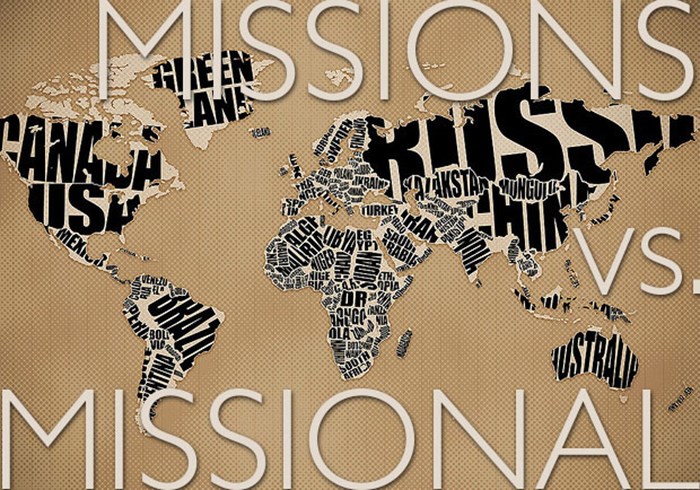 These days everyone (and everything) is missional. It's the new buzz word.

Being missional conveys the idea of living on a purposeful, Biblical mission.

Being missional conveys the idea of living on a purposeful, Biblical mission. Mission is the reason the church exists and the church joins Jesus on mission. And, this mission is from everywhere to everywhere.

But, certainly, the definition of "mission" leads us to ask about how "missions" (referring to an international pursuit to preach the gospel to all the corners of the earth) relates to "mission."

So how are "missions" and "missional" related, or should they be at all? Should one be pursued at the expense of the other, or are they really just the same thing? Tomato, tomahto. Do we just call the whole thing off?

The two issues are distinct and yet integrated. They are not mutually exclusive, but thrive best when they are both embraced and implemented in a local church body. Living on mission is not a missions issue, per se. It's a Christian issue. Part of living on mission, however, must lead to missions. So how do we accept both in a modern-day context?

Two of the commissions of Jesus give needed wisdom.

The Great Commission Points us to Missions in the Nations

Part of the problem that we've experienced when answering this question is that we embrace one, particular commission of Jesus without considering the context of the hearers and His other commissions.

It's helpful to understand the Great Commission in light of the ethnolinguistic context in which the commission was given.

For example, many of us are familiar with what has traditionally been termed the Pauline approach to missions: go out and plant churches. It's derived from the life of Paul, building upon Jesus Acts 1:8, Jesus' command to be witnesses in "Jerusalem, Judea, Samaria, and to the ends of the earth." But it is also closely related to Matthew 28 and Jesus' command to "Go and make disciples of all nations." In a sense, Paul personified the Great Commission in his ministry, so we often call such approaches a Pauline approach to missions.

Jesus' original hearers understood that, in giving the Great Commission, Jesus was making a paradigm shift in regard to missions.

The Old Testament details a clear God-given mission to the Jewish people that they were to go out and bring people up to Jerusalem where they would worship with the one, True God. It was a very centripetal mission—from the edges (the nations) to the center (the Temple in Jerusalem). Jesus is redefining that, explaining that now they need to simply go out and He would go with them there.

The Great Commission is the backbone of the missions movement.

Acts 1:8 is a literally lived out in the book of Acts. It points out that something has changed—the mission is not longer centripetal, but now it is centrifugal. So, rather than bringing the nations UP to Jerusalem, the people went out FROM Jerusalem.

They went out from Jerusalem to Judea, Samaria, and the ends of their earth.

The Great Commission is the backbone of the missions movement and expresses God's expressed desire to be praised in all kinds of people—what we call ethnolinguistic people groups today.

Thus, the Great Commission is about reaching your neighbor, but in the flow of redemptive history, it lays out a new plan for mission. And, since it involves reaching the nations, it involves missions.

When the Church's focus is solely on international missions, it becomes easy to think of ways to reach remote tribes in Africa and not engage our neighbor down the street.

The Johannine Commission Points Us to Mission to Our Neighbor

This is where Jesus' commission in John 20:21 comes into play and a subsequent Johannine approach to mission: it points to living on mission wherever you are. Jesus speaks to His disciples explaining that He is sending them as His Father has sent Him. Thus, the Bible teaches everyone is sent on mission (John 20:21) and, might I add, everyone is called to the ministry (1 Peter 4:10). The only questions are to where, among whom, and doing what.

Embracing the John 20:21 commission has ignited a revival for churches to embrace mission locally. We've begun to see North America as a mission field, which is great.

Part of the challenge with this pendulum swing from a Pauline to a Johannine approach to missions and mission is that we've become almost too focused on living on mission only in our local context lately—one of the reasons I wrote the article, "Five Reasons Missional Churches Don't Do Missions."

Mission and missions need to live together. Missional churches—those focused on living on mission where we are—must remember that Jesus called us to reach people where the gospel is not. I want us to be missional, living as agents of God's mission in context, but you can't take John 20:21 in isolation without also remembering Matthew 28:18-20 and Acts 1:8.

We need missional churches engaging in global missions because both are clearly articulated in the teachings of Jesus and the actions of the disciples.