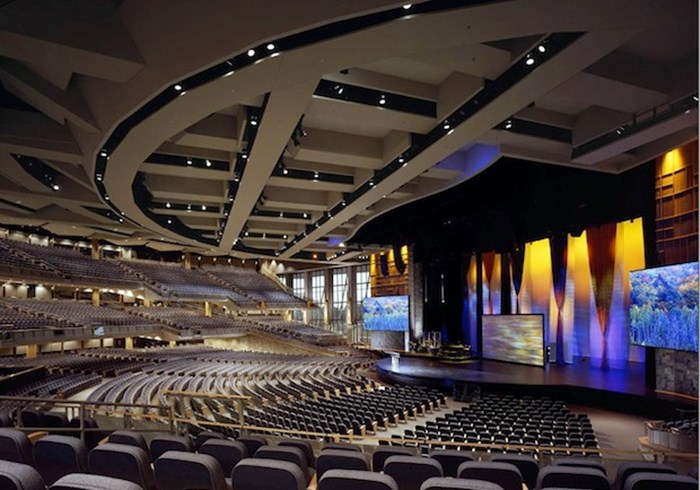 The megachurch has been a topic of interest for years. There are more every year and their growth rate is increasing. In other words, it's not just that there are more, their rate of increase is growing.

Some mega churches have begun to think differently about their facilities.

I thought it worth a moment to consider megachurch BUILDINGS—and what trends in such buildings might mean. Interestingly, some mega churches have begun to think differently about their facilities. These trends are not only fascinating, but I also find them encouraging several ways.

The last church I pastored had a 3,000 seat sanctuary. That's a big room. But, what is interesting is that the church would not build that building if they could do it again—and that's a theme I consistently hear.

What are the Trends in Big Church Buildings?

One of the trends I have observed in a qualitative way is that fewer churches are building large spaces specifically meant to accommodate thousands of people. In 2009 I posted a blogpost expressing our findings as we searched for gathering spaces of 5,000 seats or more. It would seem that being a megachurch does not necessarily imply having mega-facilities even if they maintain mega-numbers.

While the number of megachurches has increased, sanctuaries have not grown at the same pace.

While the number of megachurches has increased, my (unscientific) observation is that sanctuaries have not grown at the same pace. At the time I wrote that post (2009) the average main sanctuary seating capacity in the typical American megachurch was 1,400 at most. This is large, but nowhere near 5,000. It seems that gathering spaces of growing mega-churches continue to get smaller. There seems to have been a substantial shift from the days of several thousand-seat sanctuaries to smaller venues. There are certainly exceptions, but I'm sensing a trend—and I'll do more formal research on that later.

From Mega-Facilities to Multiplying Facilities

The decline of large church buildings points to a shift in ministry methodology. Many of the largest churches have begun to favor multisite expansion or church planting partnerships. While the large, larger, and largest churches continue to grow ever larger, they do not require larger spaces in the process—just more spaces (which tend to still be large!).

Simply put, implementing the multisite model compresses down the magnitude of the cavernous sanctuary. And, I do wonder if such buildings might be combined with a better multiplication strategy for a greater community impact.

The gigachurch often grows by adding sites and services rather than square footage to their buildings.

At least in the American context today, the gigachurch, consisting of 10,000 or more members or attendees, often grows by adding sites and services rather than square footage to their buildings. New Spring Church in South Carolina provides a prime example. Pastored by Perry Noble, New Spring runs about 23,000 people on a given Sunday. However, their campuses do not seat 10,000 or even 5,000. Instead, there are multiple services and multiple technological means to distribute the message to other campuses.

Similar models like Saddleback implement video technology on many different sites, which allows those models to have 20,000 or more people attending their church on a weekly basis. Ultimately, the growth has shifted drastically away from continual building expansion to continual site expansion. As Rick Warren explained to me recently, their growth happens like a tree—not at the trunk, but at the branches. My guess is we will hear more thinking like that in years to come—smaller (but still very big) buildings, with more locations that are also smaller.

This trend is not only true of gigachurches, but seems to the trajectory of megachurches also. One example is Calvary Baptist Church in Winston-Salem, NC. Calvary is an older established church that has little room to expand at their central campus. Under the leadership of their former pastor Al Gilbert, Calvary voted to open a second campus in an area of town where over 30% of their existing members already lived. The attendance at Calvary's new campus has more than doubled over the last 3 years, many of the new members having no prior connection to Calvary. That would have been unheard of a few decades ago.

The Benefits of Multisite Mega-Ministry

Part of the point is not really "new" news: more and more giga and megachurches are multiplying their ministry through multi-campus ministry. Perhaps you remember Warren Bird's recent research that concluded;

However, my additional point is that multisite may very well lead to smaller (and, I hope) recyclable buildings that does not lead to a proliferation of large, empty church caverns when neighborhoods change.

Megachurches have shifted their philosophy from building bigger and bigger to spreading further and further.

Also, part of the megachurch debate centered on whether or not the model could sustain itself in years to come. Since then, megachurches have shifted their philosophy from building bigger and bigger to spreading further and further through multisite ministry. I imagine that will improve sustainability as well.

Will the Megachurch Movement Endure?

It is quite possible that the evangelical landscape will include more megachurches than ever in the future. Why? Well, churches grow. Then they grow more...and then they grow some more.

While the evangelical landscape will include more mega-churches than ever, I would contend that the vast majority of those megachurches will be multisite churches. Whether you like the megachurch or not, the trends point to the fact that the megachurch phenomenon is not over, but it actually increasing in its growth.

Furthermore, I think it is now beginning to get its second wind through the multisite expansion model. When it comes to the megachurch the model of bigger church buildings is declining, but new campuses are springing to life all over the landscape.

It appears that bigger churches are having smaller buildings and more locations.

There are lots of implications here—some good and some bad. But, it appears that bigger churches are having smaller buildings—and more locations.

I'm not sure I know all the implications of this yet—and I'd like to hear your input in the comments, but a new reality is emerging and—with all such shifts—it promises both challenges and opportunities.

Join the conversation on Facebook
Tags:
None
Posted:
September 12, 2013