Meet one of the most influential, but least known, church leaders: Bob Buford.
Ed Stetzer 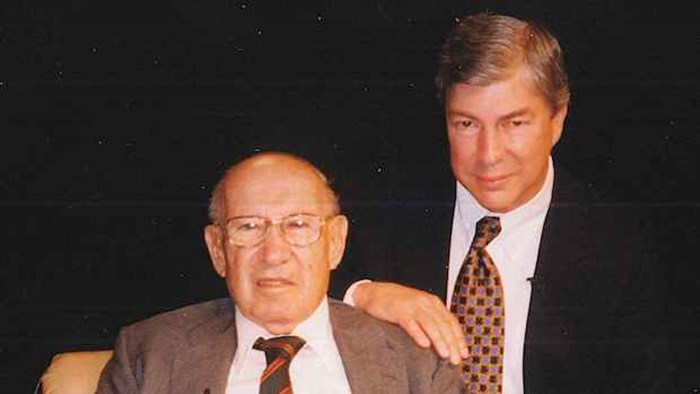 The following is an epilogue I wrote for Bob Buford's book, Drucker & Me: What a Texas Entrepreneur Learned from the Father of Modern Management.

Bob said the epilogue “explained his heart,” so I am sharing it with you. Bob loved Drucker, but Bob translated Drucker (and much more) to the church.

Bob was a philanthropist who helped resource innovative church movements that later probably influenced your church. Two weeks ago, Rick Warren and I talked about how Buford help fund Saddleback to take what later would be called Purpose Driven on the road. And, he did the same at Willow Creek. And, later church planting at Redeemer Presbyterian, and Northwood Church, and one and on.

Leadership Network has a full obituary.

Our prayers are with Linda, and our gratitude is for his life and his ministry.

Before Bob’s speech faltered, I interviewed him for several hours and will release that interview in a forthcoming oral history of entrepreneurial evangelicalism and a book for InterVarsity Press.

The Church Growth Movement began to lose its mojo. That's not exactly a scholarly word, but you get the point. After a promising start, it began to decline in the 1980s.

In 1956, Donald McGavran published a book entitled The Bridges of God. It looked at the strategies that led to an effective missionary process. The Church Growth Movement was birthed and those discussions and practices became mainstream within the church.

At that time, most churches didn't see the need to talk about or do much more than pray, sing and preach. It might be hard to imagine, but fifty years ago we did not talk much about the mechanics of doing church. Many of these were helpful changes.

What you might not know is how that took place behind the scenes. You might not know how these teaching churches and their pastors became the new locus of learning for churches around the world—and how much of it happened because of Bob Buford, a quiet philanthropist in Texas, and his mentor, Peter Drucker.

Buford became wealthy in the cable television business and then decided to make a difference with his money. It was his influence that led to the rise of significant teaching churches, which has essentially replaced the Church Growth Movement and remapped evangelicalism and beyond.

In the book, Reinventing American Protestantism, University of Southern California professor Donald Miller writes about the rise of new movements like Calvary Chapel and the Vineyard. Their influence on today's churches is hard to understate. They did, as Miller explained, reinvent the church. Your church probably looks a lot more like Calvary Chapel than it does like your grandparents' church, even if you are in the same denomination.

As the Church Growth Movement was declining, new ideas, like those of Calvary Chapel and Vineyard, were on the rise. They changed the ways that churches worshipped and approached culture. Soon other churches took the new approach to worship and culture, and started to add a new approach to leadership.

About that time, Bob Buford decided to find what he called "islands of strength" in the church and invest in them. The hope was that it would lead to an exponential return. The investment paid off.

Buford helped take a new approach to ministry, a reinvention of American Protestantism, and fused it with leadership savvy, the principles he learned from Peter Drucker. Of course, Drucker was interested in the megachurch himself. He once told Forbes magazine, "pastoral megachurches are surely the most important social phenomenon in American society in the last thirty years."

Together, Buford and Drucker made a huge impact on the direction of the church. Simply put, your church probably sings like a Calvary Chapel, but is led like a Saddleback. Those two men are part of the reason why.

About 30 years ago, Buford pioneered Leadership Network and began to influence the influencers. He invested his time to train the trainers. He sought to create learning communities that might foster mutual learning among high capacity leaders. He did this early on with men like Bill Hybels, Rick Warren, and Robert Lewis.

Buford sought to find effective leaders who would teach others and then catalyze their skills. The end result was that leaders were pushed to a great capacity of leadership. Gifted pastors became effective leaders, resulting in stronger ministries. Their influence spread and, as a result, Buford's impact was multiplied.

Leadership Network never sought to be out in front. In fact, the goal was to fly under the radar of other groups. Instead, they sought to make the clients leaders and churches the stars, not the group, and certainly not Buford. Being behind the scenes was exactly the intended role—to be the platform and not the show.

These churches, with Buford in the background as a catalyst, began to slowly change a problem. Seminaries taught many pastors how to be students of scripture (which is great), but not how to lead and manage churches. They often could teach and preach, but not lead their way out of a paper bag.

Buford helped catalyze a movement—movements really—of churches that sought to have discerning leadership practices. Not surprisingly, they were effective and grew to the point that those movements and methods influenced thousands upon thousands of churches, probably including your own.

But that is what a catalyst does—in chemistry, a catalyst helps create a chemical reaction without being used up in the process. Then, it does it again. And, as you read the history of Buford's ministry endeavors, you see a roadmap through the new influencers of church and ministry, all of whom were made more effective by the catalyst named Bob Buford.

Buford did not just convene meetings. He funded the impact he desired. He did so selectively, however, only choosing investments that would create exponential returns. For example, he and Colorado billionaire Phil Anschutz financed the Burning Bush Fund. They took their catalyzing passion and combined it with strategic investment. Leaders like Mark Driscoll, Tim Keller, Larry Osborne, Greg Surratt, Neil Cole and others involved their churches and ministries.

I was brought in as a facilitator on the second wave of the project. Seeing the names of those who were invited in the first wave, I was struck by how many were almost unknowns at the time, but had since become national influencers.

Those were the "islands of strength" that Buford sought. He would find one and use his influence to build bridges to other "islands" so they could learn from one another. He made them better and helped them spread their story.

The end result is that churches are better led and more influential, all because of a person that, by design, stayed off stage and out of the limelight.

Who Takes the Credit?

While the Church Growth Movement was declining, and the contemporary church was emerging, Buford became a key catalyst in remapping the church's influence in the third millennium—all the while remaining relatively unknown.

In late 2013, I was speaking at a celebration of sorts for Leadership Network and the Halftime organization. I presented a chart that pointed to the growth in some sectors of the church. Later, I had that chart framed for Bob. Why? Because as a missiologist, I see his influence in that growth trend.

There is a famous quote that has often been attributed to President Harry Truman, and others, that says, "It is amazing what you can accomplish if you do not care who gets the credit." That epitomized Bob Buford's approach. He chose to catalyze his learning from Drucker and his fortune from cable, without much concern over the credit.

You may not have known Bob, but he probably influenced you and your church. More importantly though, he's chosen to be a catalyst for Kingdom impact—and I'm thankful for his passion and investment to that end.