What do Americans think about the Christian part of the Christmas season?
Ed Stetzer 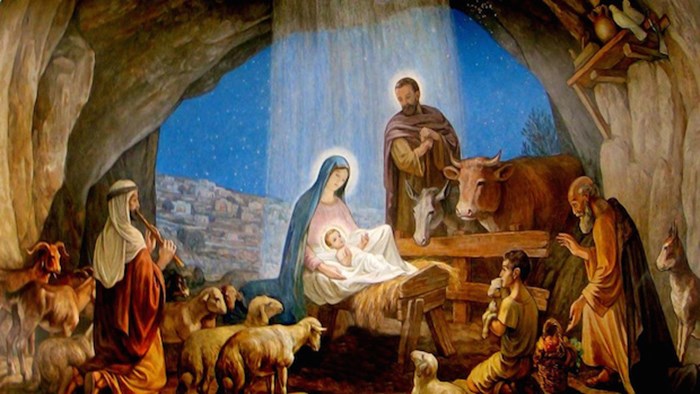 In recent years there has been some significant discussion and controversy over the de-Christianization of Christmas. With shop workers being told to say "Happy Holidays" the over-emphasis of Santa Claus, Elf on the Shelf, and other such traditions, many have felt as though we've been committing treason against the reason for the season.

New LifeWay Research data released yesterday afternoon suggests that most Americans concur with the Christian idea that Christmas should be more about Jesus. 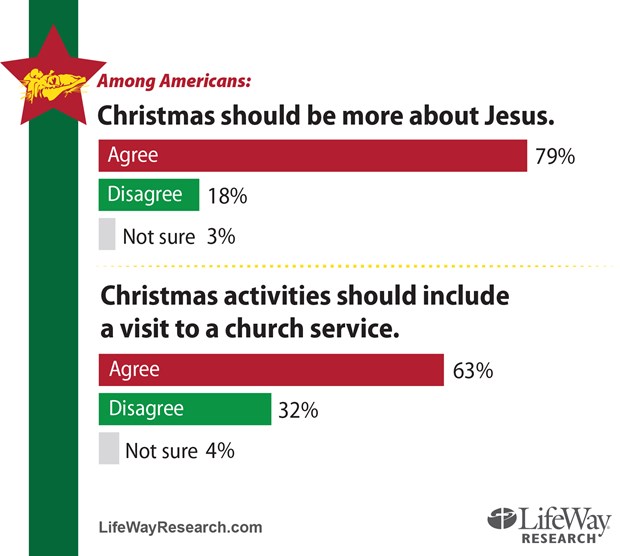 Here are some key stats from the new data:

Here's an interesting point on the singing of Christmas songs in school music programs:

Most Americans (86 percent) say children in public schools should be allowed to sing religious Christmas songs in school-sponsored musicals. About one in 10 (12 percent) disagree. Two percent are not sure.

Even many Nones—those who claim no religious faith—don’t seem to mind religious Christmas songs in school. Three quarters (73 percent) of Nones agree school kids should be allowed to sing religious songs in Christmas concerts. So do most Christians (92 percent), almost all (96 percent) Evangelicals, and even those from other faiths (71 percent).

I was happy to see that, as prevalent as it may seem at times, not a ton of people are offended by "X-Mas" or "Happy Holidays." I value the "Merry Christmas" greeting as much as anyone, but I've always been a little afraid that our anger toward alternative greetings may be hurting our witness more than helping it. 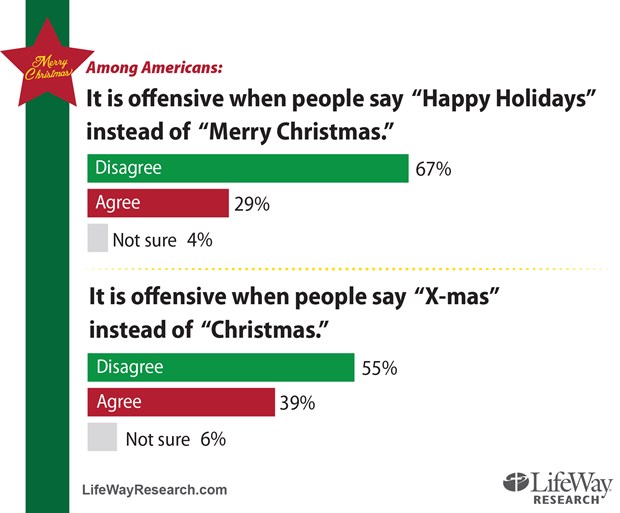 There was a bit of data that was troubling, and its related to some research we did with Ligonier earlier this year regarding theology. Here's Bob's report of the data:

Traditional Christian theology, based on the Gospel of John, teaches Jesus existed with God the Father at the beginning. “He was with God in the beginning,” says John 1:2. But, Americans aren’t so clear about the details of the incarnation and the Trinity.

A little over half (56 percent) agree with the statement, “God’s son existed before Jesus was born in Bethlehem.” Three in 10 (29 percent) disagree. Fifteen percent are not sure.

Those living in the Northeast (64 percent) are more likely to agree than those in the Midwest (44 percent) or West (52 percent).

Young Americans are less likely to agree Christ existed prior to His birth. About half (48 percent) of those 18 to 44 agree, but that number jumps to nearly two-thirds (64 percent) for those over 44 years.

Evangelicals (70 percent) have the highest agreement. Christians (64 percent) are more likely to agree than those from other faiths (52 percent) and the Nones (31
percent).

What struck you about the data? Feel free to share in the comments.