We can support the police and talk about how to make policing better at the same time.
Ed Stetzer 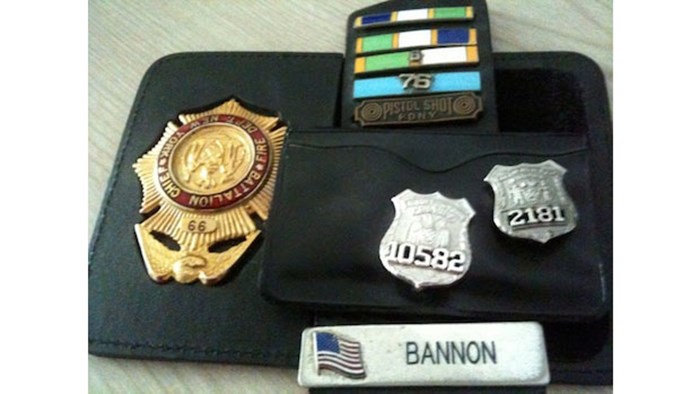 My uncle was a New York City police officer. My grandfather was a battalion chief with the NYFD-- and his brother was also a NYC cop. Those are some of their badges at the top of this article.

They were the Bannons, my mother’s side of the family, and a key part of my upbringing. Although my last name is Dutch, both sides of the family were decidedly Irish.

And the Irish loved and served the city—as officers and public servants.

They did so when it was not a good time to be a cop in New York City.

We can support the police and talk about how to make policing better at the same time.

When I grew up in the NYC of the 1970s, it was a very different world than NYC today. As I wrote in Compelled,

In New York City, what many called the “liberal experiment” of American neosocialism was coming to an end—rapidly. The social spending had simply become too much. NYC was headed toward bankruptcy. President Ford didn’t want to help, leading to one of the most famous headlines of all time: “Ford to City: Drop Dead.”

And it was a bad time to be a police officer.

"We have a history in this city, in the 70's, of these sorts of assassinations of teams of police officers and we saw more coming down the pike…Actually, in 1972, there were 12 police officers killed."

My grandfather would tell me (not using words I would repeat here) how the fire department would be ambushed using intentionally set fires and how they responded (it involved axes). My uncle would talk about the danger of the job when it felt like it was open season on police.

I remember. And I’m concerned.

We stand at a precarious moment.

Many African-American leaders are concerned about how they are treated by the police. A recent CNN poll shows a severe racial divide between how whites and non-whites view the police. More than half of white Americans (57%) say none or almost none of the police in their community are prejudiced against blacks. Only a quarter of non-white Americans feel the same way.

I’ve sought to listen to evangelical African-American pastors and leaders. In order to promote dialogue, I’ve hosted articles in the “It’s Time to Listen” series at Christianity Today and moderated the #ATimeToSpeak conversation last week from the National Civil Rights Museum.

I’m committed to racial reconciliation and to listening (and giving a platform to) evangelical African-American leaders—and we are not done building bridges.

Good police and people speak up when there are problems.

Good police officers are doing the same—looking to build bridges with communities that feel marginalized. They know that we’d be foolish not to listen to good people who feel disconnected—and all you need is some basic math to see that there are some who do, indeed, feel that way. That number including the vast majority of persons of color, and a surprising-large percentage of whites.

Having such a conversation in the right way—which is welcomed by good cops—in no way incites people to violence. Just as it was ridiculous to blame Gabby Giffords' shooting on Sarah Palin and the Tea Party protestors, in the same way, it is absurd to insinuate that anyone and everyone who has recently spoken of racial injustice are responsible for fanning the flames of a deranged man who shot his girlfriend and killed two officers.

Yet, though most did not, some individuals surely did fan the flame of hate—and anyone with common sense can see the difference.

All need to be careful with their words during this time of national tension.

We Need the Police

We’d also be foolish not to recognize that demonizing the police—who are bringing hope in so many communities—has great dangers. We’ve seen it. I’ve seen it. And, coming from a public service family, it disgusts me. Yet, indeed, we do stand at a moment where there is a great danger the police will be demonized when they are, indeed, a key part of the solution. Only a fool thinks you cannot simultaneously support the police and listen to those who think they’ve been treated unfairly. That’s the kind of thinking that divides rather than brings reconciliation.

We can support the police and talk about how to make policing better at the same time. We can seek to insert grace into these difficult moments. 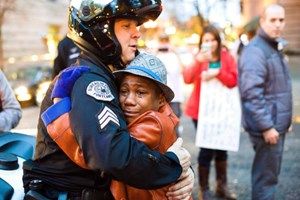 Isn’t that the story of the viral picture of the black young man, with tears streaming down his face, hugging the white police officer in the midst of a Ferguson-related demonstration?

That was a moment of grace that captured the world’s attention. We need more of those from discerning Christians today.

Police in Our Society

When I explain to people in the developing world that we trust the police in the United States, many of them are quite stunned. Corruption is the norm in many countries. But, most Americans do trust the police—and with good reason.

It is a sign of a developed society that the police are trusted and that we have conversations when that trust is broken. In other words, we speak about it—and that leads to better understanding and, at times, needed change.

That’s how it works. That’s the system. Good police and people speak up when there are problems.

Police and the Thin Blue Line

I’ve lived in an area where crime was rampant, and not just when I was a child. In Buffalo, we lived in an already crime-ridden neighborhood—and then the crack epidemic hit. You would probably not drive through my neighborhood at night. But when you saw a cop, you felt a bit safer.

The police were the ones holding back, as much as they could, the mayhem. They were what is often called the thin blue line—the line that is between crime and the public, between chaos and order.

Governing authorities are to be respected. That’s true all the time, but perhaps even more today.

I’ve been robbed twice and burgled on six occasions (as best I can recall—it might have been more). I went to the police because they are the ones who would help.

I’ve been thankful for that thin blue line.

Romans 13:1-7, though long, is worth reading here. And, keep in mind, the “governing authorities” mentioned here were not the police of the United States in 2014, they were the occupying Romans. How much more is the application relevant for us?

Everyone must submit to the governing authorities, for there is no authority except from God, and those that exist are instituted by God. So then, the one who resists the authority is opposing God’s command, and those who oppose it will bring judgment on themselves. For rulers are not a terror to good conduct, but to bad. Do you want to be unafraid of the authority? Do what is good, and you will have its approval. For government is God’s servant for your good. But if you do wrong, be afraid, because it does not carry the sword for no reason. For government is God’s servant, an avenger that brings wrath on the one who does wrong... [R]espect to those you owe respect, and honor to those you owe honor.

Governing authorities are to be respected. That’s true all the time, but perhaps even more today.

Yes, I understand this is personal for me and I am unapologetic about that—I’m proud of my law enforcement family. I’m thankful that still today my brother is convening grand juries and prosecuting murder cases and my sister-in-law is prosecuting sex crimes against children.

But it’s more than just personal.

And, today, I invite you to join me in praying for the family of Officers Rafael Ramos and Wenjian Liu, killed simply for being those ministers for good.

It might be a good time to read Stacy Hilliard’s article in our It’s Time to Speak series. He is a former police officer, a marine, a key leader in the International Pentecostal Holiness Church, and an African American. You can find his article here.