A brief summary of #ATimeToSpeak at the Lorraine Motel in Memphis, TN.
Bob Smietana 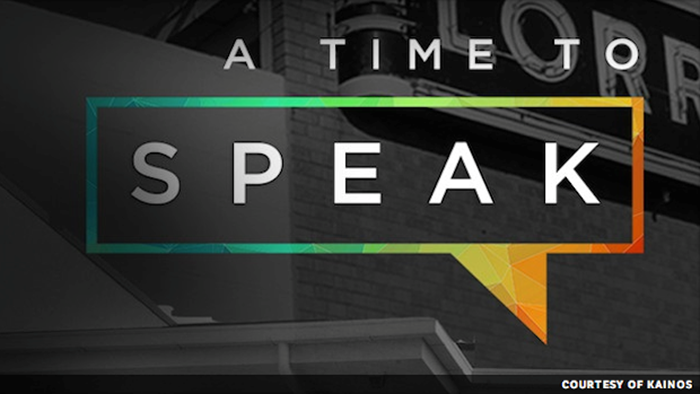 The following post is by Bob Smietana, senior writer for Facts & Trends. This article originally appeared on Facts & Trends. Bob was with us at the National Civil Rights Museum for the broadcast and I appreciate his first person view.

Four decades after Martin Luther King Jr. was shot and killed in Memphis, a diverse group of pastors gathered at the historic Lorraine Hotel—now the site of the National Civil Rights Museum—to discuss the state of race relations in America.

Monday’s event, called “A Time to Speak,” drew about 100 people to Memphis and more than 5,900 viewers to a webcast at live.kainos.is.

It was inspired by the national debate over race relations, sparked by the deaths of Michael Brown in Ferguson, Missouri, and Eric Garner in New York.

Evangelicals have been largely missing from that conversation, said Bryan Loritts, pastor of Fellowship Memphis, a multiethnic congregation.

“Where are the conservative evangelical voices?” asked Loritts in his opening remarks.

Loritts invited two diverse panels of conservative pastors and writers to Memphis for an honest and sometimes pointed conversation about race and the church.

A recent survey of 1,000 Americans found many (75 percent) say the country has come a long way on race relations, said Stetzer. But more than 8 in 10 (81 percent) agree with the statement “We’ve got so far to go on racial relations.”

African-Americans in particular feel strongly about the need for change. Almost 6 in 10 (57 percent) strongly agree relations have a long way to go. That drops to less than half (39 percent) for whites.

Loritts said whites and African-Americans remain largely disconnected in churches and society, so they can’t hear one another’s stories.

Derwin Gray, pastor of Transformation Church, a multiethnic congregation near Charlotte, agreed. He said American Christians continue to bring their racial divides into the church.

Many relationships between whites and minorities are unequal, said the panelists. People from diverse backgrounds often don’t talk to each other, except when they need something. Minorities are often in a position of need, noted Loritts. Such a position distorts their relationships.

Speaking to white Christians, he said, “You need relationships with minorities who don’t need you.”

Matt Chandler, pastor of The Village Church, a multisite church in Texas, said his views on race have changed because of his friendships with African-American Christians. He blogged earlier this year about white privilege, a post that sparked controversy online.

Chandler has become concerned about racial injustice because of those friendships. When injustice happens to his friends, said Chandler, “I want to fight.”

The most pointed disagreement of the evening came during a discussion of systematic injustice, white privilege, and the death of Michael Brown.

During the panel, Baucham talked about growing up in Los Angeles during the height of the war on drugs, when tensions between police and gangs ran high. He said older women in the community pointed to gang members who were killed as a harsh warning on how not to live.

Baucham said he was told, “That’s why you don’t live like that”—and those warnings kept him from being caught up in gang violence. He voiced concern for those who “lionize” Brown. And he argued the idea of “white privilege” is an insult to African-Americans who have overcome racism.

“What I want for the Mike Browns is for them to survive their teenage years." -Thabiti Anyabwile

“I come from a proud people who have gotten there in spite of (prejudice)” he said.

Thabiti Anyabwile, a blogger and assistant pastor for church planting at Capitol Hill Baptist Church in Washington, D.C., said many African-Americans have overcome adversity. But he also said churches have to face the reality of systematic injustice.

Anyabwile described growing up in difficult circumstances, and said he had been involved in criminal behavior as a young man. But God’s grace changed his life.

There has to be a way to prevent unarmed young men like Michael Brown from dying, he said.

“What I want for the Mike Browns is for them to survive their teenage years,” said Anyabwile, who wore a shirt bearing the names of Emmitt Till and other young black men who died violently at the hands of white men.

Christians can play a role in creating a just society for everyone, of every race, he said. It’s time for Americans to live up to the nation’s ideals.

Several panelists said change has to happen on a personal level as well as a societal and church level.

Trillia Newbell, author of United: Captured by God’s Vision for Diversity, said she’d been surprised by friends who reacted angrily when she talked about the recent racial tension in the country. She said reconciliation and conversations about race take place better out of the spotlight and away from social media.

Newbell said that a someone left a comment on her blog, saying that Michael Brown “deserved” to die.

She took exception to that comment. His death was still tragic, because all lives matter to God. “He’s a person. Aren’t we supposed to mourn?” she said.

The video feed from A Time to Speak was recorded and will remain available for viewing online at live.kainos.is, thanks to a partnership with LifeWay’s Ministry Grid service.

Other sponsors of Tuesday’s event included the Kainos Conference—which is organized by Loritts—and The Gospel Coalition. The conversation continues on Twitter, with the hashtag #ATimeToSpeak.

Loritts said he was pleased by Tuesday’s conversation and hopes it continues.

“The world heard us speak,” he said.