Watch a panel discussion on race and the church on Tuesday, December 16th at the Lorraine Motel in Memphis, TN.
Ed Stetzer 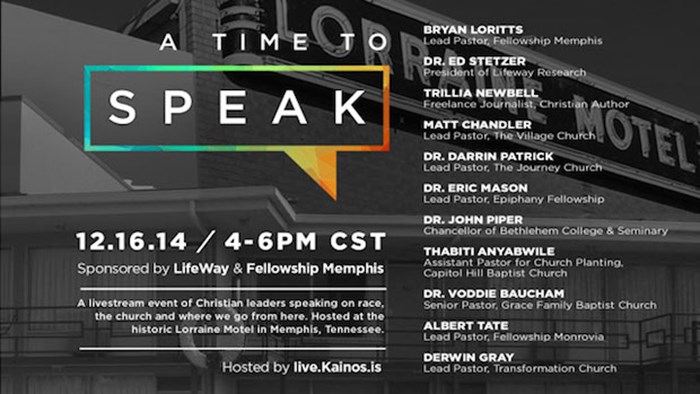 A couple of weeks ago, Pastor Bryan Loritts contacted me about moderating a panel on race and the church, following the events that have taken place over the last couple of weeks and months.

If you follow this blog at all, you'll know that we've done some extensive coverage of the events in Ferguson over the last couple months, mainly just inviting evangelical African Americans to share their thoughts via my platform.

Here are some of the blogs:

I am honored to host a panel of Christian leaders at the Lorraine Motel in Memphis, Tennessee. The Lorraine Motel is a significant location for this event—the location may mean a lot to many of you, and mean less to some of the younger readers.

On April 4, 1968, Dr. Martin Luther King, Jr. was killed at the Lorraine Motel. Today, it is the National Civil Rights Museum in the United States and will be our host on Tuesday.

“We want to boldy declare there is hope,” said Loritts, lead pastor of Fellowship Memphis, a multicultural megachurch launched in 2003.

“The grand jury’s decision not to indict the officers involved in the deaths of Eric Garner and Michael Brown has left many in our nation angry, saddened and hopeless,” he said.

“The fact that such heart-wrenching decisions have taken place some 50 years after the civil rights movement have left the children of those who marched in such places as Birmingham and Selma wondering if justice has not only been delayed, but has she finally and permanently been denied.”

I am hosting a number of well-known Christian leaders who will surely bring their wisdom and love for the gospel to our discussion. We want to listen well, dialogue on the issues, and point to Jesus.

Here are the other leaders:

The event is not open to the public, due to our location and our limited time there, but you can watch online on Tuesday afternoon from 4pm to 6pm CT (5pm to 7pm ET). We expect it to be widely viewed and discussed-- so we invite you to join us.

Our discussion will be honest and Christlike, and my hope is that you and those around you will benefit from our time together.