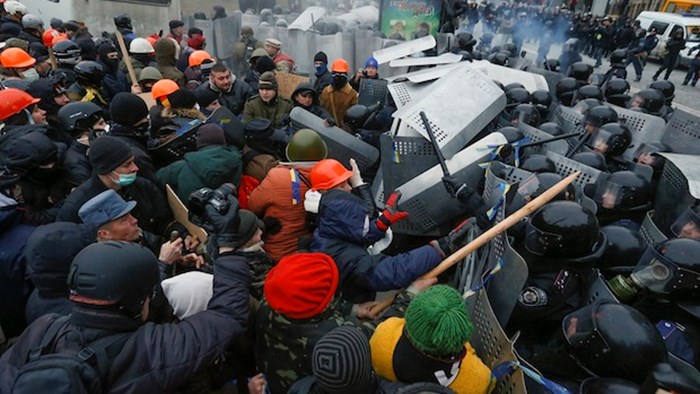 OK, bet you did not expect that the new (interim) President of Ukraine was an evangelical pastor…

A politician and evangelical preacher who has authored psychological thrillers, Turchynov was named interim president on Sunday by the opposition-controlled parliament in a bid to fill a political void left by the impeachment of Viktor Yanukovych and to end a three-month-long crisis.

The right-hand man of ex-premier Yulia Tymoshenko, who walked free on Saturday after being jailed by the ousted regime, the 49-year-old is seen as a compromise figure with little political ambition and a deep loyalty for the fiery opposition leader.

"He's always the number two man, even in his own party," said Balazs Jarabik, senior fellow at the Central European Policy Institute.

He was Tymoshenko's deputy prime minister between 2007 and 2010 and is currently deputy chairman of her Batkivshchyna (Fatherland) party, having looked after affairs while she served a seven-year jail sentence that was cut short on Saturday.

Now he is interim leader of a country on the verge of default and ravaged by political crisis since November, when protesters rose up against Yanukovych over his decision to ditch an EU pact in favour of closer ties with Russia. He faces the unenviable task of overseeing a return to stability until elections on May 25.

Analysts say Turchynov has few political ambitions, and may have been named interim president so that opposition figures with a desire to run for office can avoid staining their names before polls take place.

Can a Christian baker refuse to make a cake for a gay wedding?—Peter Foster

I was impressed with my short interview with Peter—he seems to get the issues as an outsider (as in a non-American). His article is worth your time.

Boom! A new front has opened in the Culture Wars. Arizona's state legislature on Thursday passed a "religious freedom" bill that would give greater legal protections to businesses who, for example, don't want to serve gay customers.

Consider the scenario: a gay couple walks into a bakery and asks them to bake them a groom-groom or bride-bride wedding cake for their special day, but the owners – a devout Christian or Muslim, say – refuse on the grounds that they believe homosexuality is a sin and it violates their religious beliefs.

This is not hypothetical. Just such a case occurred in Colorado in 2012 and it came to court last year, with the judges ruling in favour of the gay couple who were refused service, and against the Christian owner of the bakery.

The court rejected all of the Christian baker's defence's arguments –ThinkProgress has good summary here – saying that baking cakes was not an issue of free speech, did not constitute part of the baker's religious observance and therefore was not protected under laws that allow clergy to refuse to marry gay couples, for example.

Another well-reported and legally more complex test case involved a New Mexico photographer who declined to photograph a same-sex wedding.

More complex because photography is protected as a category of "free speech". However, the courts considered that that right to free speech must be weighed against the rights of gay people not to be discriminated against, and thus far have come down on the side of gay rights against free speech rights.

Therein lies the heart of this battle, which is going to dominate a lot of culture war and stump politics over the coming years.

Is It Time to Resurrect Sunday School?—Geoff Surratt

Geoff Surratt—yes, they cool one who likes multisite, used to work at Saddleback, and is quite the forward thinker—wants us to think about Sunday School. His article is worth your time.

I grew up going to Sunday School and I hated it. We met in tiny classrooms in the church basement.

The teacher would stand in the front of the classroom and read out of something called a Quarterly while we fidgeted and yawned and passed notes and punched our buddy when the teacher wasn't looking. Looking back, I imagine the only ones who hated Sunday School more than me were the teachers. Eleven of them quit before my mom finally became my teacher. Every year after that, my mom and I would move to the next grade until I got to high school. Good times, good times.

One of the first things I did when I became a senior pastor was quit Sunday School.

I didn't have the guts to drop it all together, but I quit going. It was a huge relief, but maybe not the best leadership decision. I didn't care, I hated Sunday School. Over the past 20 years, we have seen a big decline in Sunday School, especially among newer congregations. I don't remember the last time I came across a church plant with traditional Sunday School. If the trend continues, Sunday School will soon be completely dead.

Here's the funny thing: As much as I hated Sunday School, I'm not sure we should have killed it. (Shouldn't the next generation suffer as much as we did?)

Actually, I'm not mourning Sunday School, but rather some of the values that a well-run Sunday School (if there ever was one) supported.

Here are four core values many churches lost when they axed (or never started) Sunday School:

From Kindergarten on we had the basic Bible stories drilled into us. (Well, the sanitized Bible stories. I'll never forget the first time I read what happened AFTER Noah got off the ark. Mrs. Wood didn't have flannel graph depicting drunken incest.)

As much as I hated Sunday School, by the time I graduated I had a pretty good understanding of the basic scope and sequence of the Bible.

Even though I hated Sunday School, I actually liked going because my friends were there. I felt accepted and connected.

New York Times bestselling author and speaker Stephen Mansfield joined Ed to discuss a wide range of topics, such as the faith of past and sitting presidents, church leadership, and manhood. In this clip, Mansfield explains a little bit about what he believes it means to be a true man. Don't forget to join me every Tuesday at 3:00 PM Eastern for The Exchange.