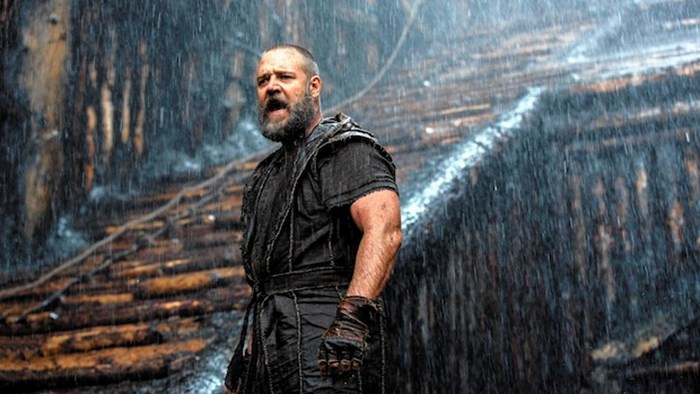 Part two of Jerry's thoughts, Five Negative Features about this Film, can be found here.

Part three of Jerry's thoughts, on whether or not Christians should buy tickets or boycott the movie, can be found here.

Note: Spoilers ahead, including the fact that there is a big flood and only a few people make it through the flood in a big boat.

Too often, Christians are in knee-jerk reaction mode when it comes to popular culture. If the world made it, we are against it, and can provide the list to tell you why. This is especially true with Hollywood. While there may be much to critique about Tinsel Town, it is more fair (and more Christian) to put the movie in context and to acknowledge its positive characteristics—before we launch a broadside attack. Here are five commendable facts about Noah:

Noah's context among all films is positive.

Several movies this year have pushed the envelope to new lows. For example, The Wolf of Wall Street set a new record for "F" word usage, according to Slate – used 544 times! In contrast, it is a significant development when a major Hollywood studio like Paramount makes a film about a story from the Bible.

Let me illustrate. I recently went to see the movie The Secret Life of Walter Mitty. There were only three trailers played during the preview to the movie: Son of God, Heaven is for Real, and Noah. Whatever one thinks about the theology of these films or their artistic merit, it is a welcome trend to see three faith-based films featured at the box-office. Hollywood is trying, the theaters are trying, and for that we should be glad.

Director Darren Aronofsky is known for movies that have a maverick and mystic quality. Noah is no different. When contrasting Noah to The Bible on the History Channel, Paramount Pictures' Vice Chairman Rob Moore said, "This movie has a lot more creativity to it. And therefore, if you want to put it on the spectrum, it probably is more accurate to say this movie is inspired by the story of Noah," (The Hollywood Reporter, emphasis added). Note the careful language inspired by, not an actual retelling or exegetical representation of the biblical text. Noah is not The Passion of the Christ, The Ten Commandments or Son of God. Paramount is about to launch a new ad campaign to emphasize this very point, which is the right thing to do. People should know what they are paying to see.

Noah follows the basic plotline of the biblical story.

Human beings have brought much evil on the earth, God judges through a flood, Noah's family is saved from the destruction through the ark, and the human race begins again upon a renewed earth. It is nice to see the main lines of the biblical narrative portrayed dramatically.

The concepts of sin and judgment are front and center throughout the whole film. In a country where the preacher Adrian Rogers used to say, "Most Americans are strutting their way to hell, thinking they are too good to be damned," Noah strikes a different, politically incorrect note. In this film, the person who shakes his fist at God is the villain (Tubal-Cain, more about him tomorrow). Noah, Methuselah, and the heroic characters of this movie all affirm God as the Creator and just Judge. In a scene that backs up the doctrine of total depravity, Noah says there is evil in his wife and his sons, even though they will be on the ark. What is more revealing, after seeing an image of himself in a corrupt city, he comes to realize and admit his own sinfulness. This is beyond a mere surface treatment of sin, and it is thought provoking. (Note to any would-be pulpiteer: If you can't preach this, maybe it is time to doubt your calling.)

The flood scenes are compelling and appear to represent a global, rather than a local, flood. No one survives outside the ark, unlike the 1999 TV movie Noah's Ark with Jon Voight, which features a pirate attack on Noah's ark at sea. As well, the ark in Noah is a big box measured to biblical specifications, not shaped like a boat as seen in Sunday school literature and so many other evangelical representations. Also, exactly eight people get off the ark, although it does not look like that will happen early on. Finally, after the drunkenness and nakedness scene, there is reaffirmation of the stewardship mandate in Genesis 1 and Genesis 9.

Other positive features commend this movie. Noah seems to work as a film because of a plot that is paced to move along, convincing special effects, and quality performances from name brand actors like Russell Crowe and Anthony Hopkins.

But wait! You have heard a bunch of bad stuff about this film. You can't believe I wrote this puff-piece! Before you shoot me, check out my next installment – "The Movie Noah: Five Negative Features You Should Know," coming next week.

Also, on Tuesday, I'll host movie critic and pastor Thomas McKenzie live in-studio on The Exchange. Be sure to join us.

Below are excerpts from the press release from the NRB and Paramount.

Here is an excerpt of the press release:

NRB's reaching out to Paramount was prompted by a special public event earlier this week at the NRB 2014 International Christian Media Convention in Nashville, TN, where Dr. Johnson led an engaging and insightful panel discussion with John Snowden, a biblical consultant for Noah, along with filmmaker, media consultant, and writer Phil Cooke, who is also a member of the NRB Board of Directors.

Together, the panelists - all three of whom had earlier seen the entire film - discussed the cinematic attributes of the film, including examples of adherence to and departures from the biblical text. Exclusive clips from the film were also shown to the crowd of several hundred.

"Because of the quality of the production and acting, viewers will enjoy watching main themes from the Noah story depicted in a powerful way on the big screen," stated Dr. Johnson in sharing his overall reaction to the film. "However, my intent in reaching out to Paramount with this request was to make sure everyone who sees this impactful film knows this is an imaginative interpretation of Scripture, and not literal."

Future marketing materials, including a soon-to-be released online trailer, the film's official website, and 100% of print and radio, as well as a percentage of the film's online and broadcast, will contain the following explanatory message:

"The film is inspired by the story of Noah.

While artistic license has been taken, we believe that this film is true to the essence, values, and integrity of a story that is a cornerstone of faith for millions of people worldwide.

The biblical story of Noah can be found in the book of Genesis."

"We are deeply appreciative of Dr. Johnson's efforts to bring this idea to us," said Paramount Picture's Vice Chairman, Rob Moore. "Our goal has been to take every measure we can to ensure moviegoers have the information they need before deciding to buy a ticket to see the film. We are very proud of Darren Aronofsky's Noah. We think audiences all over the world will enjoy this epic film."

Adding to that, Dr. Johnson said, "It is a significant and welcome development when a leading Hollywood studio like Paramount makes a major film about a story from the Bible."

"Many people will go to this film and enjoy it," expressed Dr. Johnson, who holds a Ph.D. in Christian Ethics from Southern Baptist Theological Seminary and has taught a Cinematic Theology course at the undergraduate level in college, as well as a course on the Theology of Movies and Visual Media at the graduate level in seminary. "Christians should be ready to engage with them about the main biblical themes that are portrayed in the film, namely sin, judgment, and salvation."