How did the 2014 Grammy Awards signal a shift in American culture?
Ed Stetzer 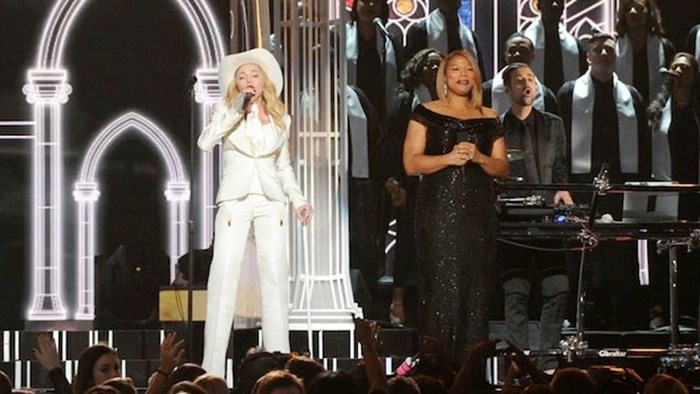 Yesterday I was asked, along with many others, to comment on Sunday night's Grammy Awards for BreakPoint, a Christian worldview ministry and blog.

Below are my thoughts on the 2014 Grammy Awards, as originally posted here.

The cultural highlight of the Grammys would certainly be Queen Latifah overseeing a mass marriage ceremony.

It was not solely a gay marriage ceremony, but the ceremony was during the gay marriage anthem "Same Love," so the intent and focus was clear. There were outward differences among the couples on the floor—different races, different gender combinations, etc.—but the central message of the moment was that the "sameness" is in the love—hence the song, "Same Love."

The Grammys are not representative of our culture, but in some ways they are indicative of its shifts.

Now, the Grammy Awards presentation is not the show you watch for high-brow cultural commentary or family-friendly entertainment. News reports indicate that many parents were shocked by Beyoncé (among others). I honestly have to wonder if these parents have heard of Beyoncé before now, and why were they expecting the Grammys to be family friendly. (J. Lo's dress from 2000 is easy to recall from the dark recess of our memories.)

So, the Grammys are not representative of our culture, but in some ways they are indicative of its shifts. And, the Grammy moment is a good moment to remind ourselves of a few things.

First, culture has changed and is changing.

Views that were sidelined ten years ago (remember, Presidents Clinton and Obama were once opposed to gay marriage) are not just accepted, they are celebrated. And, those who hold to a biblical standard of marriage are "paraphras[ing] a book written thirty-five hundred years ago" (a phrase taken from "Same Love," which many would say was the key song of the night).

Yet, it was not just a shift in views about gay marriage. We continued to see the objectification of women, communicating that talent mattered less than appearance. (And, Pepsi, thanks for making it clear how you value women in the commercials.) The coarsening of language and more were all on display.

Second, Christians will be increasingly uncomfortable in this world and will struggle to express that with grace.

As Natalie Grant (a twice Grammy-nominated performer at the show) tweeted, "We left the Grammys early. I've many thoughts, most of which are probably better left inside my head." I understand and appreciate her and her comment. Yet, we will not always have the same option. Furthermore, it's a frightening place to be if people of faith cannot live and speak about what their faith teaches and values.

We can complain about how everything has changed, but people have been doing that for a long time.

The fact is the Grammys don't mirror the values of America. They are an ostentatious display that reflects (and impacts) the culture in a distorted way—yet perhaps increasingly in a way that people of faith do not.

As we find ourselves in a new world, we must remember to speak love and truth, always using words filled with God's grace.

Third, there is great opportunity to show the difference Christ makes.

Philippians 2:14-15 calls us to "be blameless and pure, children of God who are faultless in a crooked and perverted generation, among whom you shine like stars in the world." That's our call for 2000 years. It's still our call today.

We can complain about how everything has changed, but people have been doing that for a long time. Perhaps instead we might unashamedly hold to the truth we know and the hope we have.

To paraphrase a 2000-year-old book, we show and share the love of Jesus. Again.

As the culture shifts and finds new paths, let's not shout, "Get off of our proverbial moral lawn!"

As the culture shifts and finds new paths, let's not shout, "Get off of our proverbial moral lawn!" Let's speak with grace and love, shine like light in a changing culture, and point people to the gospel that shows that better path, again.

You can read all of the other commentators here. Here are a few excerpts from some of the others:

After all that has been written about the 2014 Grammys, I find myself thinking about God's presence at the event. Of course, He was there. He never misses a show. Music is His gift to creation. But the gift can be used or abused. The Grammys displayed a lot of both.

This is an obvious overstatement, but it is true more often than not: "Music is a matter of taste; Lyrics are a matter of truth."

There were few shout outs for God from the artists, the oddest being from Sean Carter (Jay-Z): "I want to thank God—I mean a little bit for this award—but mostly for all the universe for conspiring and putting that beautiful light of a young lady in my life," Jay-Z said, looking at Beyoncé.

John Stonestreet, Co-Host of BreakPoint Radio, Host of "The Point" and "BreakPoint This Week":

It's a real shame when art is drowned out in a sea of sound and fury. A few years back at the Grammy's, I was very encouraged when the vocal talent of Adele and the Civil Wars overshadowed even Nicki Manaj's bizarre on-stage exorcism. Last night, the pendulum seemed to shift back towards sensationalism and away from art. As a believer in common grace, I also believe in the Romans 1-type suppression of that grace. The image of God in us allows humans to be almost endlessly innovative, but art is killed by the avant-garde impulse in most of its forms. There was a lot more worship of creation than creator last night, even more than usual.

If you heard the sound of yawning around America this morning, it wasn't because the country stayed up too late watching the Grammys, it's because we've gotten bored with them. The Grammys once mattered because pop music mattered. Once upon a time, J. Edgar Hoover monitored the movement of rock stars like John Lennon because he was a perceived political threat, because he was anti-establishment. Nowadays, our rock stars are the establishment, and that's not very, well, rock and roll.

Again, you can read the rest of those excerpts and other people's comments at BreakPoint.