How skywriting evangelism at Disney World challenged me in how I think about evangelism.
Ed Stetzer 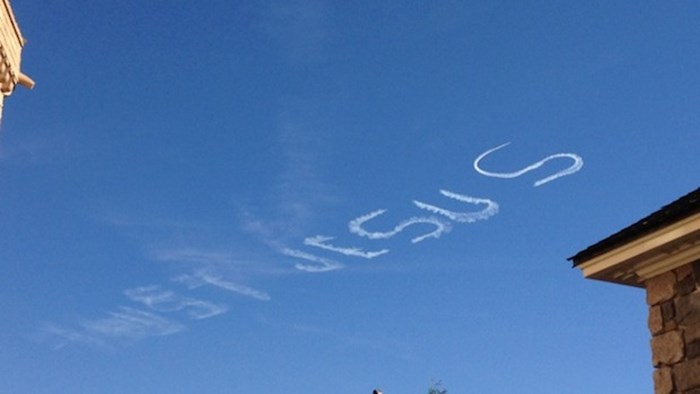 Walt Disney World specializes in catching your attention—it's a paradise for people with ADD like me. There's something interesting everywhere you look. But the day I visited, there was one thing every person in the resort was certain to notice that wasn't part of the theme park.

I was in EPCOT at the time—trying to raise girls who know about a big world and about more than just princesses (or maybe just make them nerds like their dad)—when people around me started pointing to the sky. Being a dutiful sheep, I turned and looked as well.

What I saw were the letters "T-R-U-S." Like most anyone else would if they saw the smoke take shape, I assumed it would say to "trust" someone. Then a "J" was formed, and I joked out loud that it might say, "Trust Jess." But eventually, I figured out that it was "Trust Jesus"—I'm clever like that. 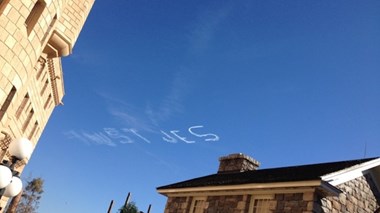 My reaction—and the reactions of others around me—seemed worthy of reflection.

First, my own instinct was to watch how others around me were responding. I have a high "hokey meter" and I wonder how people will respond to things that I perceive as hokey.

I tend to be skeptical of the effectiveness of barns painted with "For all that sinned and fall short of the glory of God," skywriters who write "Trust Jesus" in the sky, people who have T-shirts with catchy Christian phrases, and—as you may have noticed—church signs that I publish every week on the blog. So for me, both interest and some mild cynicism kicked in.

What I found most intriguing was the response of people who obviously were Christians. One couple nearby looked to one another and sort of rolled their eyes, then spoke aloud about how there are better ways to share the faith.

To some degree, I resonated with them. But since the skywriting went on for so long, I got to see the reaction of many people. In doing so, I was challenged-- and perhaps chastened.

And most fascinating to me was that (on more than one occasion) children would ask their parents, "What does it mean to trust Jesus?" I heard one child ask his parents, "Do we trust Jesus?"

Now, of course, there were some negative responses as well. There were people who obviously disdained the idea that somebody would do such a thing. Some murmured, wondering if this was a Disney-sponsored thing (it wasn't—here's the local story about the skywriters).

The fact is that in one moment, while Christians like me (and maybe like some of you) would be a bit cynical at the simplicity and, yes, the "hokeyness" of skywriting evangelism, potentially up to 133,000 people (using the average daily attendance of the four parks in the resort) actually discussed what it means to trust Jesus. That's something that should not be dismissed.

Now, skywriting is not the ultimate form of evangelism-- that takes feet and faces, not just billboards and signs. Personally, I'm more concerned that I share Christ with my neighbor than some sort of placard, billboard or flyer.

But at the end of the day, I was convicted that maybe those of us who call ourselves "missional" should be a little less cynical about Christians who are trying to get the message out in ways that we might deem cheesy or ineffective.

So, perhaps the next time you're driving through rural Pennsylvania and you see a billboard that says "Trust Jesus," or when you walk by a street preacher who is preaching the gospel with great fervor—even if you would prefer a different avenue, you might just take a moment and be thankful that somebody loves Jesus enough to want to tell a whole lot of people about Him.

It's worth remembering that your (and my) cynicism about certain evangelism methods is not actually evangelizing a lost world. In that regard, cheesy does indeed trump unengaged cynicism. Yes, there might be better ways to share Christ, but too many cynics complain about how others evangelize while not sharing Christ themselves.

Perhaps hokey is better than hypocritical.