We must be able to learn from friendly and unfriendly critics: both usually have something helpful to say.
Ed Stetzer 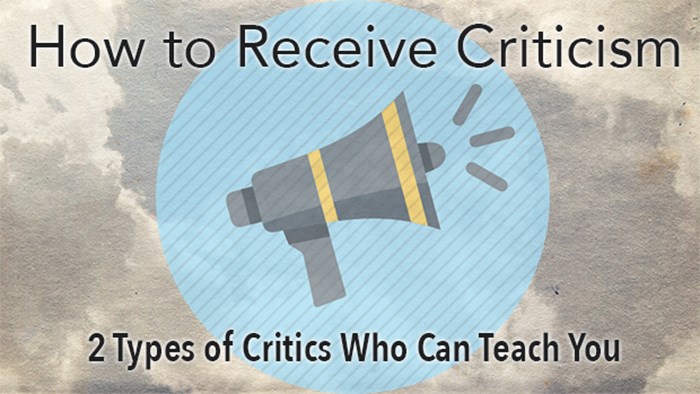 I'm working through a blog series on criticism. I started with how to give criticism, which is a lot easier. That series included articles including:

Now, we are on the harder part of criticism—how to take it. And, you need to. It's good for you (and for me). I started with "Don't Take it Personally" and then reminded you to "Consider the Source."

God can use criticisms from unfriendly people for you.

It's a hard balance—you want to receive criticism, but not from every single person. The fact is, being a leader attracts criticism—if you want everyone to like you, go sell ice cream.

However, I'd encourage you to consider receiving criticism not just from people who like you, but also from those who don't. In other words, you can receive criticism from unfriendly and friendly critics.

Since it's harder, I'll start with learning from those who are not friendly. In many cases, they don't talk to you, just about you. Either way, God can use criticisms from unfriendly people for you.

Unfriendly critics have taught me lessons by what they say, even if they don't say it to me. For example, in speaking of making sure people understand the Bible, early in my ministry I would say, "We need to make the Bible relevant."

And actually, I think that's a true statement that can sometimes be misleading. At the encouragement of a person who most people would consider to be an unfriendly critic, I changed the terminology from "We need to make the Bible relevant," to "The Bible is already relevant—it's relevant in every time and every culture—but we have to make people understand how it's relevant."

The difference is subtle, but it helped me to reframe the conversation and I learned from an unfriendly critic (who, today, I consider a friend). But, when I heard of his criticism, I thought on it and said, "He's right. I'm wrong." And, though my pride worked against it, I made the change.

I can think of about a dozen other examples (and I am sure there are hundreds more) where someone who did not like something I said, did, or believed helped me to make to communicate more clearly, correct a wrong, or just think more deeply on something I said.

Friendly critics are the easiest to learn from because they have your best interests at heart.

Friendly critics are the easiest to learn from because they have your best interests at heart. A biblical example would be Apollos, learning from some Priscilla and Aquila in Acts 18:26: "He (Apollos) began to speak boldly in the synagogue. After Priscilla and Aquila heard him, they took him home and explained the way of God to him more accurately."

Now, don't miss that. We don't know all the details, but here is what we know—an articulate and powerful speaker came to the synagogue and then was instructed by a trusted married couple who, from what we know, were not "speaker types."

I wonder how many of us would receive criticism and instruction from someone in the church who thought we needed to be more clear on a subject? But, that's the kind of person we should strive to be—radically open to those who we know have our best interests at heart.

Having critics like Priscilla and Aquila, who love and care for us enough to take us aside and tell us we aren't articulating something correctly or that we are somehow misunderstanding, is helpful and can be honoring to God.

Friend or Unfriendly: Do They Have a Point?

The key when listening to unfriendly and friendly critics is to ask if they have a point. If you continually ask that question, you'll turn your critics into your teachers.

If the answer is, very clearly, "No, they have just ridiculously missed the issue," then it's not necessary to consider much further. But, if you think EVERYONE is just foolish and misses the point, they might not be the problem—it might be you!

"Professional" critics, who are perpetually aggrieved, tend to play loose with the facts.

But, this type of criticism is common, though usually not that egregious. "Professional" critics, who are perpetually aggrieved, can tend to play loose with the facts. It's a never-ending stream of accusations that have some truth but little character. Still listen to the truth, but weigh the character and track record of the critic.

It's most surprising when it is a supposedly "Christian" critic, and often a conservative one, arguing for some theological issue. It seems that people who stand for the authority of Scripture often seem to forget that Scripture includes the ninth commandment: not bearing false witness.

Thus, in that case there is no point to the criticism. It is just the foolish ramblings of someone who wishes to misrepresent facts in the name of truth.

However, both unfriendly and friendly critics often DO have a point, and I think we need to turn your critics into teachers by seeking to understand what the lesson is. Then, we ask how that point can be best understood and addressed in our lives.

So I always ask the question, even though perhaps the critic has inarticulately stated it, "Is there truth here that I need to address?" Then I consider what God may be trying to teach me through the criticism. And, I actually find that the majority of critics have some truth to their criticism, though the majority of criticisms do not. (Why that math? Because, in my experience, a few critics do most of the criticism, but it's the less-frequent critics who tend to be the most on target.)

Critics are a gift.

If we're humble but not foolish—casually disregarding people that God has places in our path—the end result is that we will be able to receive what should be received and ignore what should not be.

Critics are a gift. I know not every critic is, but if you discount them all because of a few, you miss the gift. You need critics to remind you that you are not perfect. You have to remember that though it may not seem like it—believe it or not—they are often right.

Refer back to Part 1 (on not taking criticism personally) and Part 2 (on considering the source of the criticism) for more on receiving criticism.