What you think of when you hear the word "missional" matters to how you seek to be missional yourself.
Ed Stetzer 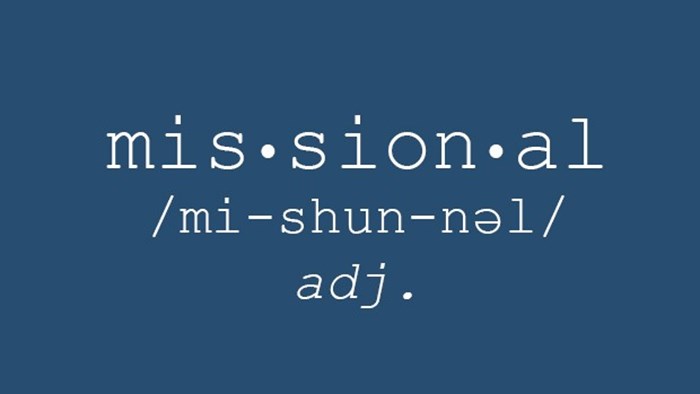 A few months ago, progressive mission-thinker Steve Knight critiqued a post I wrote here on The Exchange.

I like Steve. He's smart and engaging. And, I like the name of his blog, Missional Shift (particularly since David Hesselgrave and I edited a book called MissionShift). We obviously disagree on some things, but that is what will make a good blog discussion.

Being missional conveys the idea of living on a purposeful, biblical mission.

His comments were especially helpful to me as I'm in the process of writing one of the "five views" in a forthcoming book, which will include contrasting a Mainline and evangelical look at mission and missional.

Steve and I dialogued some in the comment section of his post, but I believe it could be beneficial to respond to his criticisms here.

First, in explaining the differences between missions and missional, I wrote:

Being missional conveys the idea of living on a purposeful, Biblical mission. Mission is the reason the church exists and the church joins Jesus on mission. And, this mission is from everywhere to everywhere.

In his response post, "Missions vs. Missional: What Ed Stetzer Gets Wrong," Steve said:

So, in other words, the global Church is going missional. All "missions" (whether local or global) should be "missional," i.e., driven by God's agenda, not our western theological agenda(s). The definition of "missions" that Ed Stetzer continues to promote is simply outdated and incomplete. His "missions" and his "missional" really just mean the same thing: the old way of thinking about mission — it's colonial, it's paternalistic, it's western, and it's, well, wrong.

Which, of course, is not quite what I said. Instead, I put it this way:

Mission and missions need to live together. Missional churches—those focused on living on mission where we are—must remember that Jesus called us to reach people where the gospel is not. I want us to be missional, living as agents of God's mission in context, but you can't take John 20:21 in isolation without also remembering Matthew 28:18-20 and Acts 1:8.

We need missional churches engaging in global missions because both are clearly articulated in the teachings of Jesus and the actions of the disciples.

Mission is the reason the church exists and the church joins Jesus on mission.

Since I was probably not as clear as I should be and I cannot expect Steve to have read everything I've written on the subject, I attempted to clear things up with Steve at his blog.

But I understand missional as much bigger than just local. Being missional conveys the idea of living on purposeful, biblical mission. Mission is the reason the church exists and the church joins Jesus on mission. And, this mission is from everywhere to everywhere.

I actually didn't expect Steve to agree, and he didn't, but I think the disagreement is helpful. He responded:

I'm still stuck with the feeling that a distinction desperately needs to be made between "missional" and "missions." That a fundamental theological shift is underneath the new language that has to do with how we view God (as being a missional God) and how we view the Church (in relation to God's mission). Without acknowledging those shifts, and simply continuing to use the language of "missions," we risk perpetuating what I would call an old paradigm way of thinking—and all the negative stuff that goes along with it (e.g., colonialism, patriarchy, etc.).

This made his disagreement clearer to me.

I believe his view is similar to the conciliar mission movement that came about after the 1952 International Missionary Conference in Willingen, Germany and was influenced by Dutch missiologist Johannes Christiaan Hoekendijk. (You can read more about those in the series I linked earlier, particularly in this post: "Seeing Missional in 3D.") From my perspective, there were errors resulting from that movement I don't want to repeat.

Evangelicals, like myself, will see mission as broad, but will always value missions—planting churches and evangelizing those without Christ, generally in cross-cultural situations.

While Steve seems to be more Hoekendijk, I am a bit more like British theologian and missiologist Lesslie Newbigin, whose views are described by Michael Goheen here:

Newbigin made an important distinction between mission and missions, or missionary dimension and missionary intention. Mission is an all-embracing term that refers to "the entire task for which the Church is sent into the world." Missions or foreign missions are intentional activities designed to create a Christian presence in places where there is no such presence, or at least no effective presence. As such the foreign missionary task is an essential part of the church's broader mission.

So, again, my cards on the table.

We need a deeper understanding of mission.

I believe people sent on mission will and should sometimes cross cultures for that mission. But for Steve, he ended his article saying:

[Stetzer's] "missions" and his "missional" really just mean the same thing: the old way of thinking about mission — it's colonial, it's paternalistic, it's western, and it's, well, wrong.

I actually agree you shouldn't do missions in a way that is colonial, paternalistic, and western. And I get that, from Steve's perspective, that's exactly what I'm advocating.

But, I am with Newbigin and, I think, evangelicals. We need a deeper understanding of mission, a higher engagement in mission, and more people engaging in the part of mission that involves cross-cutlural missions.

Simply but, mission is joining Jesus on mission, from everywhere and to everywhere (John 20:21). Missions is a subset of mission, more focused on global evangelization, planting, etc. (Matthew 28:18-21).

I want a lot more of both.

For those interested in more on the topic, these series in The Exchange archives may help: