An important part of receiving criticism is carefully considering the source.
Ed Stetzer 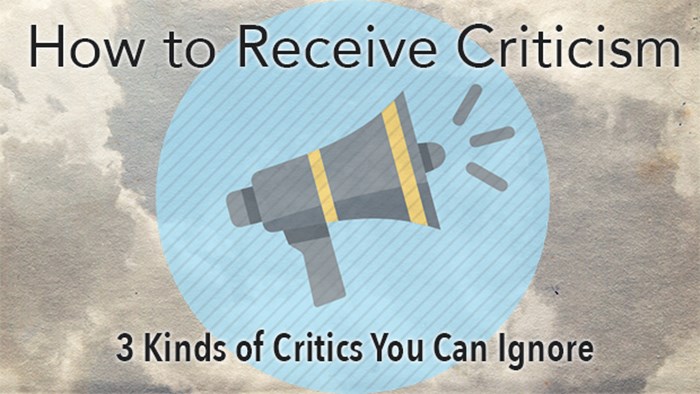 Part of leadership is handling criticism, so I've tried to share some things to help you along those lines.

To start, I shared a five part series on how to give criticism with integrity:

Now, I am looking at how to receive criticism. The first step is to not take it personally. You can embrace and learn from criticism from both unfriendly and friendly critics.

We need criticism, lest we believe we are without fault.

But, we don't need criticism from everyone. Simply put, you have to consider the source of the criticism. I do not take all criticism equally and neither should you. I am pretty active in the realm of the "Christian blogosphere," so a number of my examples are from my experience there, but generally speaking, these principles can apply to your office, church, or otherwise.

There are three kinds of unhealthy critics to consider:

For example, one critic regularly sends a complaint letter (not an email, but one of those paper things). Over time, the complaint letters lost their value. Why? It was just another letter from the same person about a new issue.

Or, there are blogs that are one attack after another. Everyone is a heretic, liar, or whatever. The fact is that constant critics just do not need to be responded to like the honest critic who is not "enraged" all the time.

Some of these critics are now basically celebrity bloggers (often criticizing celebrity pastors without accountability), while missing the great irony of that accusation.

Even beyond the blogosphere. I have talked with numerous pastors who face criticism from the same congregants regularly that find their criticisms wholly unhelpful because they can never seem to be pleased. One who criticizes and never seems to be content is easy to ignore, whether it be at the office, the church, or otherwise.

The Critic With Low Character

One who criticizes and never seems to be content is easy to ignore.

There are critics who lack integrity, plain and simple. They make accusations and engage in exaggeration and just about everyone knows this is their approach.

I am stunned to see just how much some "Christian" bloggers, in particular, will lie, play guilt by association, and display a complete lack of character—all while calling out someone for something similar. Again, the irony. Such practices certainly occur in Christian communities outside of the blogosphere as well.

This doesn't mean you can't learn from these sorts of critics, but they very well may not be worth listening to when they have developed a pattern of misrepresenting, constant complaining, or exaggerating.

Unhealthy opportunistic critics are always looking for a new angle or issue, desperate for a new way to attack since the last try failed. Just see them for who they are.

If you are a pastor, they will complain you did not visit them, even though they don't like you when you come. If you are a Christian leader, they will go from one issue to another, always convinced they have a "gotcha" moment because that's what drives them.

These critics are only looking for the opportunity to critique and complain. They are very concerned about one new thing because the last thing did not stick. Long story short, they are not trying to critique what you do, they are just after you.

Don't Miss the Value Because of the Critics

Yes, there are angry and nutty critics—but that doesn't mean that you don't NEED criticism.

Arguing with angry people is like wrestling with a pig—you both get dirty, but only the pig likes it. You don't have to show up to every fight you are invited to.

I used to read all the criticism of me on the Internet. I don't any more—I recognize the same people and can skip those.

Yes, there are angry and nutty critics—but that doesn't mean that you don't NEED criticism.

We Need Discerning Openness to Critics

The problem is that sometimes we consider ALL critics unreliable, and that's a major problem leading to spiritual and emotional blindness. You should not discount a critic unless you have significant knowledge showing this person to be contentious or consistently disingenuous.

Now, I imagine that some of the critics mentioned above will, well, criticize this post—missing the obvious point that I am talking about how to receive good criticism. Such is life. My suggestion: read the whole series, put it into practice, and people will take you more seriously. You may be right, but you're doing it wrong.

Part of being a leader (or thinker, writer, pastor, or whenever you put things out there) is taking criticism. The disingenuous critics used to bother me—now I've learned to filter or ignore them. But, if you discount honest critics—even the ones who don't like you—you are missing an opportunity for learning.

Read on to Part 3: two types of critics who can teach you, or refer back to Part 1 on not feeling attacked by critics.