How to Receive Criticism: 3 Ways to Avoid Feeling Attacked by Criticism

You're bound to face criticism of some form. The question is: how will you deal with it?
Ed Stetzer 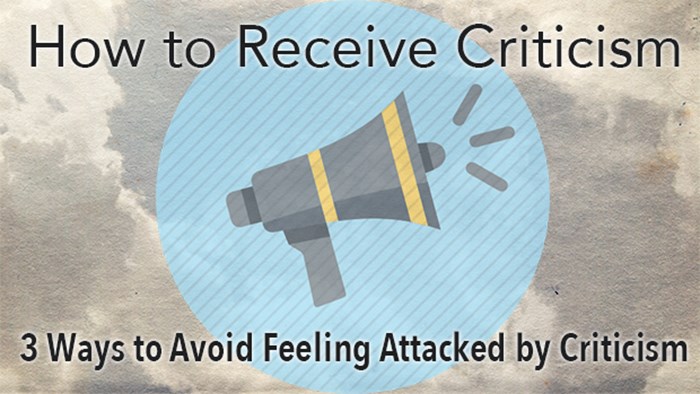 Criticism is a fact of life, particularly for leaders. Previously, I wrote a blog series on giving criticism. I shared five parts on how to give criticism well:

1. Critique What One Actually Believes

4. Check Your Motive and Goal

5. Admit When You Are Wrong

I'd like to come back and address the other side of it now. How should you receive criticism?

Whether we like it or not, criticism is a necessary and even helpful part of learning from one another in the body of Christ. Yes, some people are too thin-skinned to receive it. I confess that I'm not a big fan of it, but I know it is helpful for my sanctification.

People won't always be happy and sometimes they will say so.

As a public figure, people regularly take to social media and blogs to criticize me and various aspects of my ministry. That's part of life for anyone who leads, speaks, or thinks in public.

If you want to be liked all the time, go sell ice cream. Criticism comes when you put it out there.

I have found, however, that it can be a welcome part of my own learning journey.

You may not be a public figure, but if you are a leader in any capacity, you will earn critics for yourself. People won't always be happy and sometimes they will say so.

But, that does not mean we should be afraid of criticism.

Criticism is defined as: 1. To find fault with 2. To judge the merits and faults of; analyze and evaluate.

If no one can ever find fault in your ideas or judge the merits of your decision, you're acting like God, not serving God.

So, how might we prepare ourselves to receive the to be expected criticism? Let me share several ways over the next few blog posts, starting with what may be the most obvious, yet most difficult to apply.

The presence of so many ad hominem attacks often makes this difficult. But, the reality is that most of us tie our opinions to our personhood.

If, however, you can look at it detached from the personal issues of pride and embarrassment that are both impacted by criticism, you may discover that your critic has a point.

Simply put, you are not always right and you won't know that if you are always offended when people point that out.

If no one can criticize you, then you are probably too inaccessible.

Here are three things to help you maintain the proper perspective when facing criticism:

Yes, pastors and Christian leaders should listen to God and share the leading they believe they receive from Him, but the fact is that we are imperfect and other people hear from God—and God uses them to correct us.

2. If no one can criticize you, you are probably too inaccessible.

Most churches have some sort of means where people can share their input, thoughts, and even disagreements. It might be a vestry, elders, deacons, trustees, board, or something. For this article, I'll call them elders.

3. If you lash out at those who criticize you, you probably don't have a teachable spirit.

Sure, you can yell back at those who yell at you, but that does not accomplish much. Instead, sometimes it is worth waiting and asking some questions about the critics and the criticism before responding.

The next post will address just that—consider the source of criticism.

Read on to Part 2 about considering the source of your criticism, and Part 3 which outlines two types of critics that can teach you.

How to Receive Criticism: 3 Ways to Avoid Feeling Attacked by Criticism

How to Receive Criticism: 3 Ways to Avoid Feeling ...