How did you react to hearing of Fred Phelps' death? Here's how some reacted.
Ed Stetzer 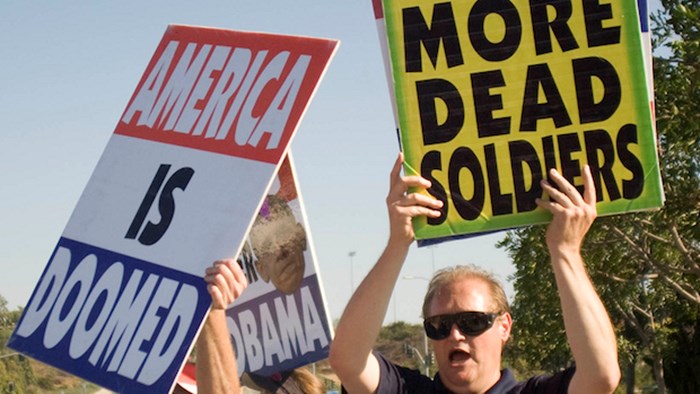 In case you missed it yesterday, Fred Phelps, the founder of the Westboro family religious group that protests soldiers' funerals proclaiming God's hate and wrath, has died. I posted a blog yesterday calling for Christians to love others amidst the death of a hateful man, not celebrate his death by hating on him like he hated on others.

COMMENTARY: May God have mercy on Fred Phelps—Amy Tracy

First, Amy Tracy's article is moving because of her own journey. This article ran in the Washington Post and elsewhere.

A "fringe hatemonger" — that's what I called Fred Phelps in a letter to the editor of The Washington Times in 1999. In response he announced in a news release that he was coming to Colorado Springs to protest the "... false prophet James Dobson and his fag-infested Focus on the Family scam."

It felt almost "out of body" to pull into the Focus campus one morning and see people holding explicit neon signs telling me I was going to hell. I was a fairly new believer at the time, and managing media relations for Focus on the Family. With my salvation came the holy conviction to begin the difficult journey to battle against my own same-sex attractions. The chants, the signs, the venom — it all felt uncomfortably familiar. Christians were once again protesting me. I couldn't get away from it.

Fred Phelps Sr., the fiery founder of a small Kansas church known for its anti-gay picketing at military funerals, has died.

It also challenged my immature understanding of theology. "What if Phelps is right?" I worried. I buried these thoughts for years — though truth be told, they'd surface at nearly every mention of his name.

I know better now, but words spoken, for good or for evil, during the most vulnerable moments in life make an indelible impression. I have harbored a bitter root of ill will toward Fred Phelps. His hate lodged into my heart during a tender time of spiritual growth.

News that he was admitted to hospice and near death brought about mixed feelings this past weekend. I volunteer for hospice twice a week in a faith-based role. I care for and love people without a clue as to who they are or what harm they've committed in their lives. However, there are glimpses of the past.

An elderly mother jolts herself back from the brink of death for days because she's waiting to say goodbye to her son. She calls out his name over and over. In the end, her body gives out. He doesn't visit.

ANALYSIS: Fred Phelps' hateful legacy may be the opposite of all he intended—Cathy Lynn Grossman

Cathy Grossman is right. Fred Phelps moved public opinion—away from his own views.

"God Hates Fags" was the Westboro philosophy, detailed in vile slogans on signs that a tiny band of relatives toted to 40 sites a week around the country. All told, the church in Topeka, Kan., claims to have staged some 53,000 protests.

Whenever there was a newsworthy death — be it Matthew Shepard, the gay teen murdered in 1998, or a soldier killed in action, a movie star, or an innocent child victim in a mass murder — Westboro would add it to the church's picketing calendar.

But by the time of his death, Phelps had lived long enough to see American public opinion soar in exactly the opposite direction — in favor of gay rights, including marriage.

The message he spread across the country never took root, and in fact helped galvanize the gay rights movement and put other Christians on the defensive. The image of Christianity he painted was a hateful, judgmental collection of rabble-rousers — an image that, paradoxically, did more to help his targets than it advanced his message.

Experts say Phelps' ultimate legal and social impact on the American religious landscape will be a footnote. Religious leaders lament the damage they say he did to Christians who preach God's love and mercy.

Born on Nov. 13, 1929, in Meridian, Miss.,Phelps reportedly quit West Point to study at Bob Jones University and became an ordained Southern Baptist minister in 1947. But he left the SBC for a more fundamentalist theology and launched the Westboro Baptist Church in Topeka in 1955. While once considered a champion of civil rights, Phelps turned to focus lifelong enmity toward gay rights and began his notorious picketing campaign in 1991.

Fred Phelps Needs What He Has Never Shown—Aaron Earls

My colleague Aaron Earls speaks of the need for grace. And he's right.

As news broke yesterday that Fred Phelps, pastor and founder of the familial cult known as Westboro Baptist Church, the giddy tweets began to pour out.

People seemed delighted that a man who was known for rejoicing over death would soon face that which he seemed to relish for others.

With his history as an NAACP award winning civil rights lawyer, Phelps is more complicated than a caricature. But in recent years, all he has shown to anyone outside of his family cult has been hatred.

He knows hate and wrath. He has no concept of love and grace. The god he has fashioned in his own image is incapable of forgiveness.

So that's what he's been getting in return. "God hates Phelps! Picket his funeral. Show Phelps exactly what he's shown everyone else."

That's just it though. All he knows hate. The false god he worships knows hate. Why would hate be the way to respond to him?

Before he dies, I pray Fred Phelps discovers the grace he refused to display from the true God he never knew existed.

There is no denying that Phelps has harmed the reputation of the Church in the eyes of the world. But so have you and I.

Obviously not to the extent that Phelps has, but I've messed up. I haven't shown grace where it was needed. You have not been the ambassador for Christ that you should have been at every moment of your life.

Just before he died, Joe Carter gave some context about Fred Phelps.