Dropouts and Disciples: How many students are really leaving the church?

Are students leaving the church in droves? What can we do to stop the bleeding?
Ed Stetzer 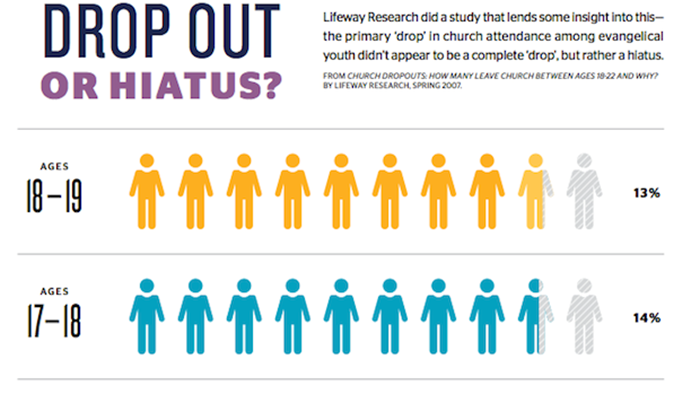 The folks at Modern Reformation magazine asked me to share a bit about dropouts. You can read the article here. I wrote an expanded version that I thought I would share:

Dropout is a key word in today's evangelical churches concerning teenagers and young adults. The quote often sounds like this: "86% of evangelical youth drop out of church after graduation, never to return." The problem with that statement (and others around that number) is that it's not true. But that doesn't mean there is no reason for concern. 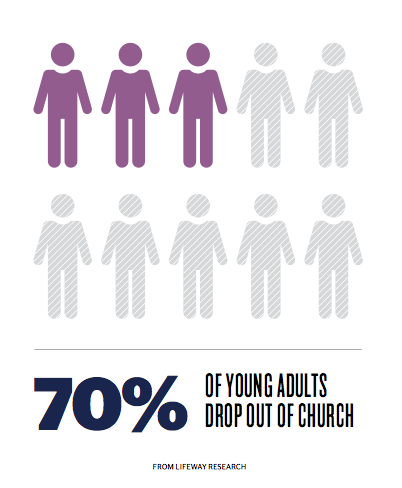 80% of young people who dropped out of church said they did not plan to do so during high school.

LifeWay Research data shows that about 70% of young adults who indicated they attended church regularly for at least one year in high school do, in fact, drop out—but don't miss the details. Of those who left, almost two-thirds return and currently attend church (in the timeframe of our study). Also, that dropout rate is from all Protestant churches—evangelical and mainline.

Church attendance among teens and young adults follows some important patterns. There are always some coming and some going. Yet something significant happens between the ages of 17 and 19 that accounts for the vast majority of those who leave. At age 17, the twice- monthly attendance of our study sample drops as follows: 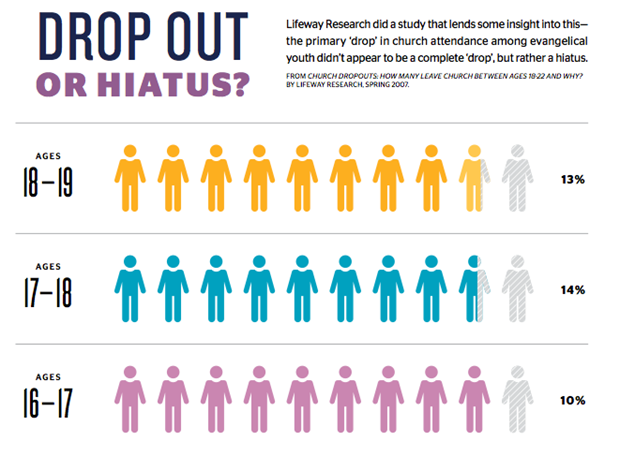 Between 17 and 19 is where the drop takes place. Our study was of those who attended regularly for at least a year in high school—so our sample is not representative of all teens and young adults, but clearly something is happening in that age range.

In most cases, our surveys show a lack of intentionality in dropping out. Eighty percent of young people who dropped out of church said they did not plan to do so during high school. It's not that most rejected the church. Our teenagers aren't primarily leaving because they have significant disagreements with their theological upbringing or out of some sense of rebellion. For the most part, they simply lose track of the church and stop seeing it as important to their life.

Statistically, we found four factors that were the most predictive in determining which teenagers stayed in church:

Dropout doesn't have to be a key word. We can replace it with something far better. When teenagers see an active, practiced faith in their parents and other positive examples at church, they will stop being dropouts and start being disciples.

If your student ministry is a four-year holding tank with pizza, don't expect young adults to stick around.

1. Disciple, disciple, disciple. If your student ministry is a four-year holding tank with pizza, don't expect young adults to stick around. If, however, they see biblical teaching as relevant and see the church as essential to their decisions, they stay.

2. Have a home with committed Christian parents. According to the USC study I referenced earlier, 74% of married couples who were both evangelicals also had kids who were evangelical. I was raised by a single mom who loved the Lord and I'm so thankful for those who do, but parents (together) make a significant statistical impact.

3. Recognize that it takes a church to raise a committed young adult—involve other adults in the discipleship process. This is where student pastors, volunteers, and other adults being invested in the lives of teenagers can be so important.

No, the dropout numbers are not nearly as bad as many would have you think, but there are still way too many students who fail to see the significance of the church moving forward into early adulthood. But there are things we can do to change that.

Dropouts and Disciples: How many students are really leaving the church?

Dropouts and Disciples: How many students are ...