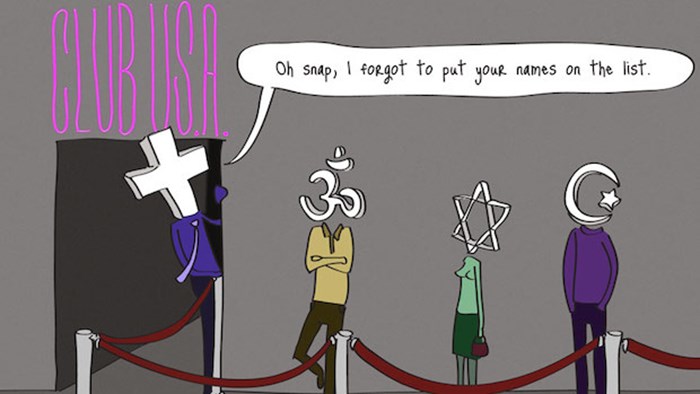 I think that more and more people are beginning to understand (or at least argue about) the concept of privilege. I've talked to Christena Cleveland a bit about this on an episode of The Exchange (and, congrats Dr. Cleveland for your appointment to Bethel College).

I found this list to be helpful and thought provoking, particularly when Christians in the West say they are being persecuted. (See Anglican Archbishop Welby on such "persecution.")

You might not agree with all the list, but take a moment and listen to a non-Christian explain the privileged position that he believes Christianity—or at least (as I would see it) a sanitized version of Christianity—holds in our society. It might make you think.

Following is a list of privileges granted to people in the U.S. (and many western nations) for being Christian. If you identify as Christian, there's a good chance you've never thought about these things. In response to the ever-increasing "War on Christianity" headlines, I thought it prudent to create this list. Try and be more cognizant of these items and you'll start to realize how much work we have to do to make the United States a place that is truly safe and accessible for folks of all belief systems.

Please comment below if you have any additions or revisions to make!

An Explosion of Joy—Krish Kandiah

Krish Kandiah, from the U.K. Evangelical Alliance and an all-around good guy, writes a helpful article for Christianity Today's Global Gospel Project, not to be confused with the Gospel Project, that Trevin Wax and I help create.

Oh, and I took Krish to lunch at a local Nashville place once—trying to broaden his Brit sensibilities.

When I was young, growing up in the United Kingdom, my family and I could always count on our next-door neighbor, Mrs. Oglive, to be around. We left a spare key with her in case we got locked out. We forgot our keys quite often, and she was always there—morning, afternoon, and night—to let us in.

Mrs. Oglive never went out. She suffered from agoraphobia, the fear of open spaces. Having lived next door to her for 40 years now, I still haven't seen her venture past her doorway. She wasn't always this way. She has pictures on her mantelpiece of less anxious days, from her honeymoon with Mr. Oglive and from a day at the beach with her children. But after her husband died, Mrs. Oglive began to isolate herself. As a child, I saw opportunity in this: Her garden resembled a jungle, and I earned some pocket money by pretending to be Indiana Jones armed with a machete slicing through the undergrowth, clearing the path to her front door.

As an adult, I can only imagine the heavy cloud of fear and frustration that surrounds her. Now frail and in the twilight of life, Mrs. Oglive's curtains are almost always drawn. But now and then, I still get locked out, and as she hands me the spare key, I am glad to see she is still alive.

I see parallels between Mrs. Oglive and the contemporary church. Many Christians observe the world from behind closed curtains, bemoaning culture instead of engaging it. Many local churches are isolated from the wider community and world, bunkered up like a coterie of doomsayers, suffering from fear of an open public square with divergent viewpoints and lifestyles. Meanwhile, many onlookers have read the church its last rites, so to speak, due to its dwindling numbers, scandals, and shrinking influence in Western society.

These challenges are not unique to Western believers of today. The apostle John gives us a snapshot of a first-century church in a similar situation. Just three days after the Crucifixion—one of the most important events in history—where do we find the church? On a tenacious missionary charge, turning the world upside-down? No; the disciples are barricaded in, "with the doors locked for fear" (John 20:19). Who can blame them? After all, the Romans brutally executed their leader, and Jewish leaders are out to destroy the remnants of Jesus' ministry. Naturally, the disciples thought these leaders would come after them next.

The Bible's Unequivocal 'No' to Domestic Violence—Rachel Marie Stone

Justin and Lindsey are doing such great work. I've had them both at the blog (here, here, and here). Now Justin is serving at the Episcopal Cathedral in Orlando, with Greg Brewer (who has known me longer than my wife). It's great to see them together and I am excited for his new book.

BTW, we are also working on some research right now that I will present in a few weeks at Georgetown University.

Make sure you don't miss this article.

I can't write about domestic violence without a nod to my current context: I live in a small, impoverished country in sub-Saharan Africa where domestic abuse, including physical and sexual violence against women and girls, is rampant. Women have few resources for getting out, getting safe, and getting help.

One of my friends and colleagues—a minister in the largest Protestant church in this country—says churches are seldom able to address the issue. Domestic violence is considered more or less "normal," she tells me, and clergy are inclined to dismiss it either as unimportant or as something to which a God-fearing woman should submit.

Until I read Is It My Fault? Hope and Healing for Those Suffering Domestic Violence (Moody Publishers), by Justin S. and Lindsey A. Holcomb, I had no idea that the leading cause of death for African American women ages 15 to 45 is murder at the hands of a partner. Nearly three out of four Americans personally know someone who has faced domestic violence (90 percent of the victims are women). As the Holcombs show, the effects of domestic abuse are wide-ranging, unpredictable, severe, and long-lasting, affecting both the women and their children. Boys witnessing domestic violence, for example, are twice as likely to become abusers themselves.

Justin (a pastor and adjunct professor at Reformed Theological Seminary) and his wife, Lindsey (a case manager at a domestic violence shelter), answer the title's question with an unequivocal "no." They also acknowledge that while "many victims believe clergy have the most potential to help them," in fact "[clergy] are too often the least helpful and sometimes even harmful."

Indeed, years ago, I sat through lectures in which a Bible professor insisted that spousal abuse was not grounds for divorce, and that submission required enduring some forms of abuse. A popular pastor-theologian once made a similar suggestion in a Q&A session. He said that if the household abuse is "not requiring her to sin but simply hurting her," then he thinks she can endure "verbal abuse for a season" and "perhaps being smacked one night" before going to the church for help. (He later clarified that women could seek help from the authorities if the situation warrants it.)

Evangelism expert, author and seminary professor Dr. Alvin Reid joins me in studio to discuss evangelism, church history and student ministry. In this clip, Dr. Reid shares thoughts on how we can be bold in evangelism without being mean. Don't forget to join me every Tuesday at 3:00 PM Eastern for The Exchange.