Regardless of what the grand jury's decision means or what the facts say, we should still care about the people of Ferguson.
Ed Stetzer 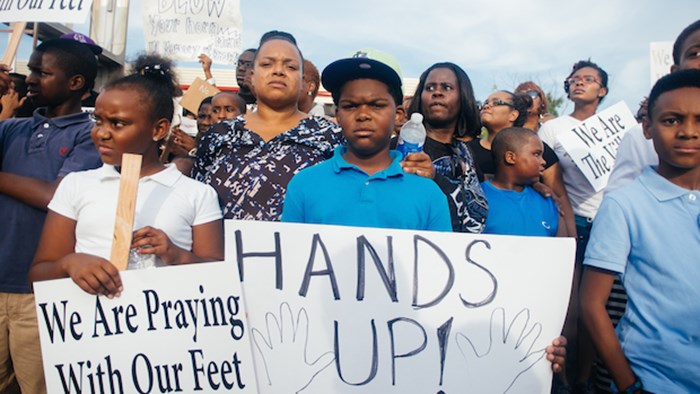 It breaks my heart to see.

As the family of Michael Brown and the President of the United States ask for peace and change and this is what we see. However, it is important to note that this does not mean most African Americans are involved in the looting. Not at all.

Yet, the looting itself is repugnant in more than one way. It will cause many to lose property and some may lose their lives. However, it may also cause many to say, “See, this is what happens with those people.”

Even more, we need to be careful about our discussion of "facts." Bryan Loritts says, "Facts are a first and last resort in a court of law, but when it comes to human relationships, let us first stop and feel before we go to facts."

Please do not be one of those people who ignore the hurt. You would not do that in your interpersonal relationships, so don't do that in our national conversation.

The point is not to ignore or devalue facts in a specific instance, but to recognize that, in all relationships, there are other issues to also consider.

Every right-minded person I know condemns riots, and every right-minded person should also still learn from this entire situation. Officer Wilson was not indicted. That is done. The facts have been in dispute, but now a mixed-race grand jury has heard them and they have made their decision. So, part of this moment is over. But it is not all over.

If you sense exasperation from we African-Americans over yet another news story of a black man slain at the hands of a white man, this is a wonderful opportunity to grab some coffee and seek to understand our hearts. I need my white brothers to know how I felt as I sat in the preaching classes in Bible college and seminary not once hearing examples of great African-American preachers. I need you to know how I felt when I was forced face down on the hard asphalt of Crenshaw Boulevard in Los Angeles, all because I was nineteen and driving my pastor’s Lexus, a year after the 1993 Rodney King riots. I need you to ask how Ifelt when I walked into a Target recently behind a white woman who took one look at me and pulled her purse tightly to her.

The events in Ferguson—including the death of Michael Brown, riots, excessive force, and outside agitation—remind us about the reality of sin and its effects. While details continue to come out and a grand jury begins to convene to examine evidence, we have to step back and grieve. I cannot fathom the pain and frustration the Brown family experiences because a son and heir will no longer sit at the dinner table, talk about his first year of college, or have kids.

This is the fear and effect of sin that all families must confront at various stages of life. None of us are exempt. We have to grieve because we must once again address racism in reaction to an event. I am honestly frustrated that the death of this young African American by law enforcement appears to be the only impetus for this discussion on addressing issues of race. I personally wrestle with the fact that, after years of seeking to promote the relevance of the Gospel upon social justice issues in my own ministry, it takes the death of another young man to cause evangelicals to speak, tweet, and write.

What makes this death different from that of Trayvon Martin, Francisco Trujillo, or the hundreds of young African American men who die each week through violence? We must grieve because this discussion on race tends to divide men and women, revealing the idolatry of our own ethnic distinctions. Racism is not a sin specific to Caucasians.

The problem is that each part of me creates a different perspective. Communities like Ferguson run into problems when they cannot understand how each group of people (police officers and African-Americans) see events like this differently.

Too many encounters between young African-American males and white law enforcement officers are rooted in false perceptions that have created an unhealthy perspective on both sides. I believe that much of this is due to conversations that were meant to serve as solutions being centered on the wrong focal point: race.

My hope is that as we move into the holiday season, beginning with Thanksgiving later this week, we will take a moment with our friends and family to pray for the people of Ferguson, Missouri, and people everywhere in our country who feel oppressed and unjustly treated. Might we love them with the sacrificial, unconditional love of Jesus.

Read yesterday's post, "A Decision in Ferguson: How Should Evangelicals Respond?"

Be sure to listen to the others who wrote on the blog back in August, as well: