A significant percentage of pastors aspire to address mental illness, but how many actually do?
Ed Stetzer 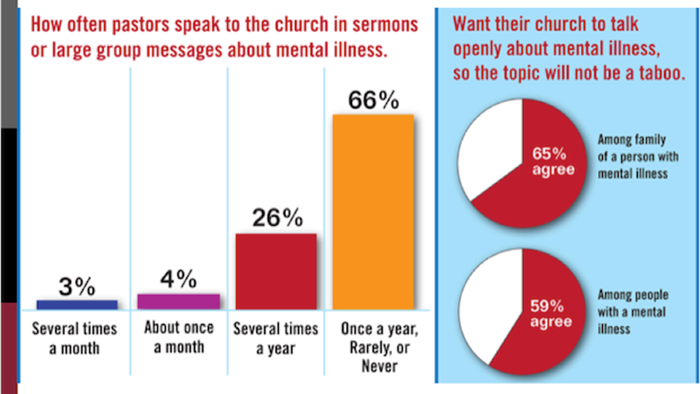 Mental health has been a hot topic of conversation lately, and rightly so, because the church honestly doesn’t know how to deal with the multi-faceted issue.

At Facts & Trends, our LifeWay magazine where I serve as the Executive Editor, we decided to do a cover story on the subject of mental illness and the church. You can find several articles including:

We evangelicals have much to learn about addressing it in a healthy and holistic way. Mental illness carries with it an unfortunate and undeserved stigma to which church leaders just do not know how to respond. I am encouraged, however, by the openness among church leaders in the current climate toward understand mental illness more fully as to serve their people more appropriately.

As part of the recent discussions, LifeWay Research recently released the results of an important study on the church and mental health. The information gleaned from the research is very telling, as it reveals the holes in our collective understanding of mental illness and our approach to helping those caught in its unforgiving clutches. Hopefully, we can learn from it and shape a new, more helpful approach to serving those who struggle with mental illness.

Whether we like it or not, the reality is that, if we want the people in our churches to be aware of any sort of ministry or issue or attitude we’d like to address, the pastor has to talk about it. Mental health is no different. But as you can see from the following graphic, it is certainly not a topic we prioritize, by any means. About 66% of pastors say that they mention mental illness in a message, sermon, or homily once a year, rarely, or never. 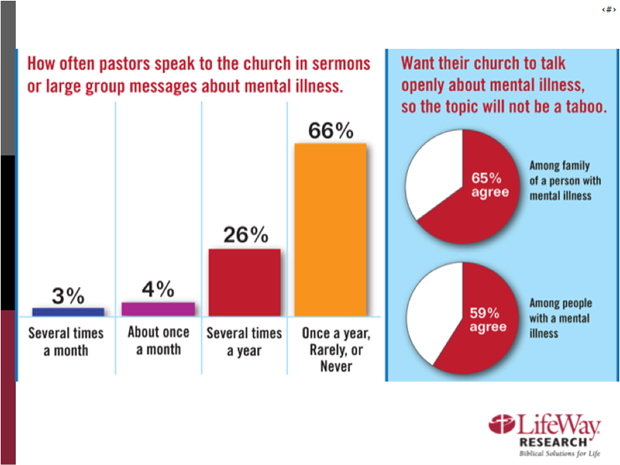 Yet when you talk to the people who actually struggle with mental illness and their family members, you hear that many actually want their churches to talk openly about the issue so it will not be taboo. In fact, nearly two-thirds of those in families dealing with mental illness and 59% of those individuals who are agree that churches should be more candid in their approach. I also happen to agree-- we need more open dialogue and open discussion on the issues.

Lest we let ourselves off the hook too easily here, thinking maybe church leaders are simply unaware of the issues at hand, the next image illustrates that 59% of pastors have actually counseled one or more people who are eventually diagnosed with an acute mental illness.

We know that pastors and police are often the first responders in a mental health crisis, and the preparedness of the police is a regular topic of debate. But there is not as much preparation as we might hope for those entering and engaging in pastoral ministry. (This is also mentioned in this recent New York Times article, including new reserach from (baylor prof) and mentioning our LifeWay Research data.) 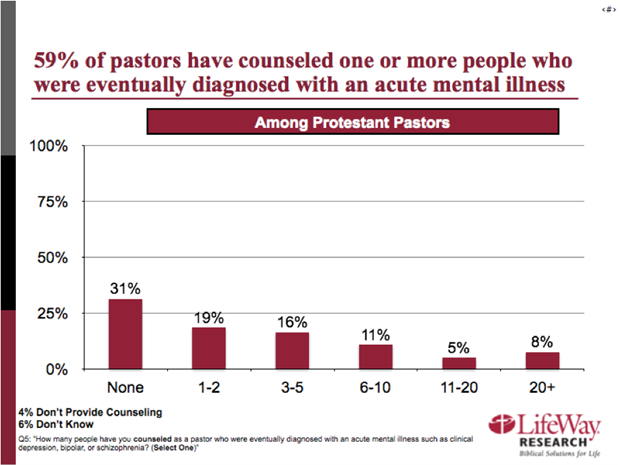 On that note, as you can see in the next graphic, we found that 38% of pastors strongly agree that they feel equipped to identify a person dealing with acute mental illness that may require referral to a medical professional.

One the one hand, that is good news, because there are indeed pastors who feel as though they have been sufficiently prepared for this particular issue. On the other hand, it is only 38%, so we have a long way to go to insure that all of our leaders are prepared. 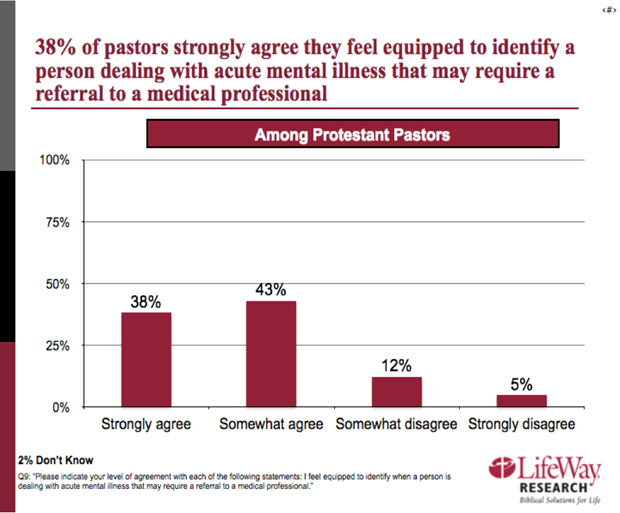 In the next slide, you can see that 41% of Pastors actually strongly disagree that they are reluctant to get involved with those with acute mental illnesses because of previous experiences, strained time, and resources.

Now, a quick word about research: When we undertake statistical research involving clergy, we employ this technical two word phrase, so pardon the high-level jargon, but “pastors exaggerate.” I don’t mean that they are intentionally untruthful, but they experience “the halo effect” causing them to see things a bit more positively than they are in reality.

So, this is how they answered, but as I look at these numbers, I wonder if they are (perhaps) overstating their willingness to get involved. Of course, that's a hypothesis-- the numbers are the numbers. 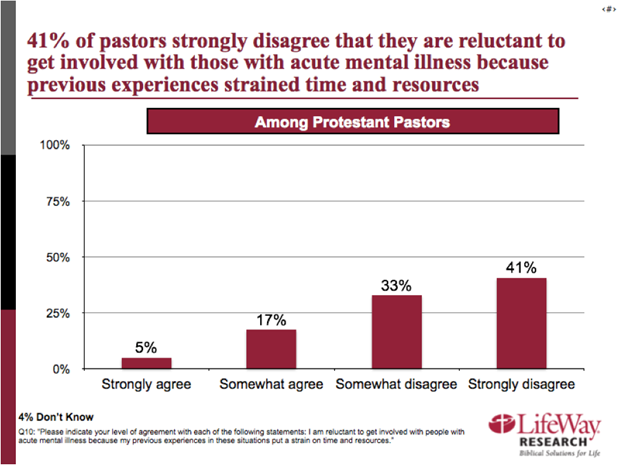 If you look back at the responses, though, you will see a surprising number-- total of 23% of the respondents either strongly or somewhat agreed that they are reluctant to get involved with those who suffer from mental illness. I appreciate that honesty, and I would postulat-- based more on actions than survey responses-- that the majority of pastors actually think like the 23% than the 41%.

That said, 56% of pastors strongly agree that local churches have a responsibility to provide resources and support to individuals with mental illness and their families. That number is not nearly as high as it needs to be, but it is an encouraging start. It shows that the mainstream view is that churches should have a role; but, as we continue on through the rest of the findings, you may see that perhaps such a role is more aspirational than actualized. 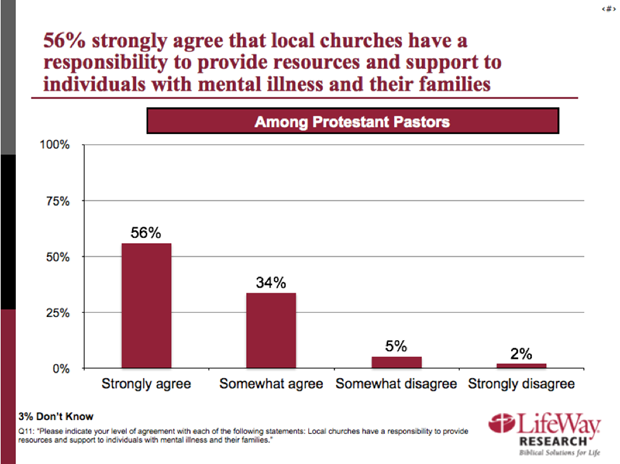 Thus far, we’ve looked at numbers that give a general overview of where we are in the church when it comes to dealing with issues of mental health. The numbers are not even close to where I would like to see them, but they do reveal an openness for change. In the next post, we will turn the corner and look less at the general and more at how our churches perceive particular methodologies for dealing with mental illness.

Focus on the Family has many helpful resources here.