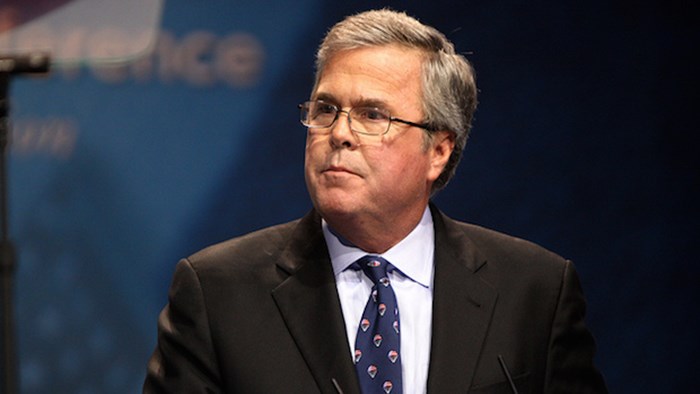 Here is a report from the meeting I spoke at yesterday. I spoke after Jeb Bush, reminded everyone that Jesus is not coming back on a donkey or an elephant, and encouraged people to follow Jesus on mission. But, I must say, listening to Bush talk was fascinating (as was seeing his father, President Bush, who looks great).

Standing in front of his father, mother, and more than 1,000 Hispanic evangelicals, probable Republican presidential candidate Jeb Bush spoke Wednesday about his multi-ethnic family, the political failure that led him to the Catholic Church, and the academic success of Florida's Latino students.

Bush called immigration a "key element of our country's success," and repeated his call for laws to provide an "earned legal status" for many of the nation's 11 million undocumented immigrants. "We are a nation of immigrants," the former Florida governor said at the annual meeting of the National Hispanic Christian Leadership Conference. "This is not the time to abandon something that makes us special and unique."

Bush, 62, is staking out ground in the Republican presidential race as a pro-immigration candidate, an unlikely calling card within a party whose leaders in the U.S. House rejected a bipartisan immigration bill last year, and instead voted to remove deportation protections for children brought to the U.S. by their parents.

I was intrigued by the fact that Governor Jeb Bush talked about his “conversion” to Catholicism. (That was particularly fascinating considering this was before a group of evangelical Latinos.) Bloomberg tells more about his faith here.

(I’ll be highlighting the candidates' faith as I see the stories. Tweet me @edstetzer if you see stories I should highlight.)

When Jeb Bush converted to Catholicism nearly two decades ago — adopting the faith of his Mexican-born wife, Columba — he explained what primarily attracted him:

That former faith was Episcopalian, the church he was raised in.

Bush, who had lost his first campaign for governor in 1994, reassessed more than his religion in the aftermath of that humbling loss to the self-described “old he-coon” of Florida, then-Gov. Lawton Chiles. Bush had campaigned in ’94 as tough on crime, demanding that inmates work for their keep.

He underwent “`a personal transformation’ that included a reevaluation of his political, spiritual and family life,” wrote Mark Leibovich. then of the Washington Post, now arbiter of all things that are “This Town” Washington at the New York Times. His 2003 piece, “The Patience of Jeb,” noted that Bush began taking classes in the Catholic faith, and converted to Roman Catholicism in 1996.

On a totally unrelated note, the biggest fight in the world is coming up… and this interview with Manny Pacquiao is simply fascinating. They talk about faith, conversion, Israel, and more. Just fascinating. And, Liam Neeson. Fascinating.

Justice Alito: Well, in the Bob Jones case, the Court held that a college was not entitled to tax­exempt status if it opposed interracial marriage or interracial dating. So would the same apply to a 10 university or a college if it opposed same­-sex marriage?

Download this week's edition of The Exchange Podcast with Amy Simpson.