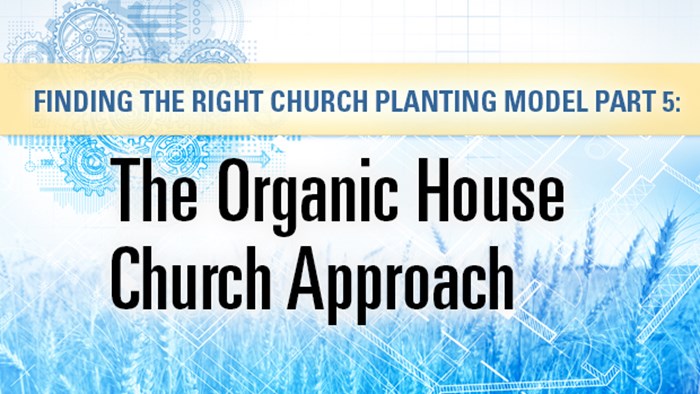 This is Part 5 of a series on church planting models. Here is the whole series:

Our culture has been obsessed with “organic” in recent years. Organic usually means there is an absence of foreign, unnatural, and/or processed chemicals or elements. In other words, it doesn’t have all the unhealthy additives or chemicals as the regular stuff.

In this post, I want to continue my series on church planting models, including alternative models, by sharing some information regarding the organic/house/simple church approach.

Thinking of organic people may bring to mind the granola and Vespas, but for organic church planting, I immediately think of Neil Cole. He is a proponent and practitioner of the Organic Church approach, and has the best and most winsome writing on the subject. In fact, in talking to Neil, he eats, drinks, sleeps, and breathes this movement.

But, certain terminology relates to certain people. Using people who have been here at the blog, Neil Cole is who I associate with Organic Church, Felicity Dale is often associated with Simple Church, and there have been several associated with House Church.

Of course, David Garrison, author of Church Planting Movements, is one of the best known missiologists for promoting simple expressions of church. But even more recently, Francis Chan—author, speaker, and now church planter—has become a practitioner such approaches in his current ministry.

Yet, I can't keep writing organic/simple/house, etc., so I will just call this the Organic Church model.

The rumors of Organic Church are often larger than the presence of organic churches. That's not to say that there are not helpful and promising expressions, but much has been written, so people are perhaps more aware.

For example, if you read George Barna, particularly in his widely-read book Revolution, you might know a lot about the movement, but might know fewer examples. I've commented on Revolution before, and had some concerns about the ecclesiology and the numbers.

As of now, we don't see an outbreak of such churches, and every investigate of the poromised Church Planting Movement in the western, industrialized, democratic world has failed to meet the CPM test. However, while the Organic Church model may not be as wide spread as other approaches, there are still some parts and communities that are promising.

Just like organic food is the absence of the foreign, unnatural, chemical, and processed stuff, so organic churches are the same, just in regard to the modern trappings of church. Because proponents and practitioners are focused on multiplying disciples. not necessarily expanding an organization, they have less stuff that could otherwise prohibit reproduction.

Their mantra is, “Less is more.”

Therefore, you typically will find very little structure, organization, programs, and bells and whistles in an organic or house church—especially when compared to Launch Large or even Missional Incarnational church plants. Organic Church planting practitioners are usually focused on one thing: discipleship.

Obviously, proponents of this model will note Acts 2 and other places where the church met in houses or from “house to house.” They will articulate how the early church didn’t have the church buildings, programs, or any other ecclesiastical trappings we enjoy today, yet they still grew and multiplied. Their attraction was their simple lifestyle and incarnational living.

And, they'd be right.

Yet, there are challenges and we've not seen a breakout of this approach like we have in some places.

The places where we have seen some progress (and often substantial) include restricted areas, closed countries, college campuses, large apartment complexes, urban or high-density areas where the cost of living is expensive. Also, people who are disenfranchised, weary, or intimidated by the more institutional and organized forms of church may be open to an Organic Church.

There are many strengths of the Organic House Church model. First, many do an incredible job at discipleship—focusing on the simple elements of discipleship, which enhances the effectiveness to rapidly reproduce. Truthfully, this is an area that can benefit all church planting models.

Second, organic or house churches typically release believers into areas of leadership and service at a higher rate than other models. (Neil Cole describes this practice in Cultivating a Life for God.)

Third, given that house churches typically only have the gospel and community, that’s what they win people to. As Neil Cole has expressed, “What you win them with, is what you win them to.” As a result, they don’t have to worry about adding anything else in order to keep them committed or entertained—especially in a culture where the attention span of consumeristic people is often less than that of a gnat.

But this is also one of their weaknesses (or at least challenges).

Most Organic Churches aren’t a place where one will find the singing to be excellent, the teaching and preaching to be proficient, and the children/youth programs to be safe, secure, and engaging. Of course, that's the point—but, it is also a challenge to most and a weakness to some.

I remember Felicity Dale telling me how their simple church compares to the expressions of large churches in Austin, and she was quite honest that the draw of larger community, singing, and more is significant (and, she reminded me, one of the reasons that large churches shouldn't worry about simple churches stealing their people—large churches have plenty of draw to the average Christian).

Another possible weakness, and one I've seen frequently, is that some Organic Churches have a weak ecclesiology—meaning they may not have all the elements many Christians would say constitute a church. This is particularly true in some corners of the movement that are populated by the frustrated children of evangelical mega churches who simply want to do church differently—thus they are birthed from more a negative reaction against something rather than a positive reasoning to be for something.

So, they just do life, which is good, but they don't do church, which is more than just being in community. Doing church, as practiced by those first century Organic Churches, included things like covenant community, biblical teaching, baptism, and more.

As is the case in all of these descriptions, my analysis is brief and imperfect, but I am trying to overview different approaches. However, I do see some great strengths in this approach and am grateful for the way some of the people I've mentioned challenge me.

You can probably sense that when I write about people like Neil Cole. For example, in this post, I compare him to a dancing shirtless guy. (Be sure to read it before wondering what that is all about.)

So, I'm a supporter (and sometimes a defender) of Organic Churches. (I once had to go to battle in a way that almost cost me a job.) I want more, not less, Organic Churches. Furthermore, I think this approach will increase in influence in the years to come.

I also want a sober analysis of Organic Church—seeing what has happened, but perhaps not overstating the impact as some have done.

Either way, I'm thankful for many practictioners who have cast their boat into a new sea, that is really as old as the New Testament church, as they joined Jesus' mission of planting Organic Churches.