Pastors are divided about when divorce is sinful and whether or not they would perform the wedding of someone who is divorced.
Ed Stetzer 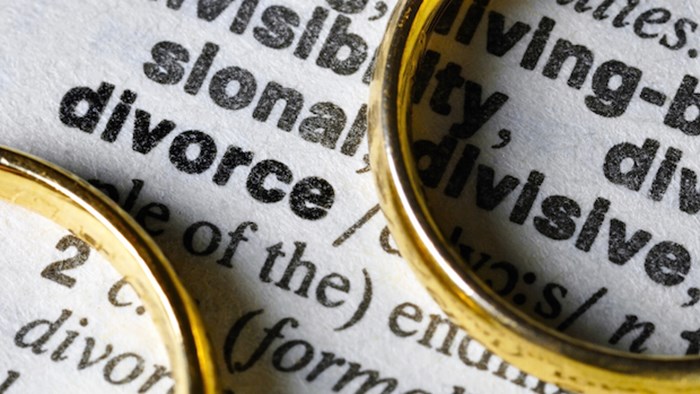 Last week, LifeWay Research released new data from a recent study on how Protestant pastors and Americans see divorce. What makes divorce sinful? Do circumstances around the divorce drastically affect how pastors or Americans view divorce?

What Do Americans Think?

Scott McConnell, Vice President of LifeWay Research, reported, "About one in seven Americans are saying divorce is a sin in all of these cases, more than a third don’t think any of these would be a sin, and almost half believe some circumstances would be sinful, but not others."

Differences also exist between Americans from different regions of the country. Those in the Northeast and those in the predominately Protestant South are more likely to consider the various possibilities as sinful compared to those in the West. Westerners are the most likely to say none of the reasons would be a sin (51 percent).

The survey of 1,000 U.S. adults finds only a minority would call divorce a sin even when:

- The two people no longer love each other (38 percent).

- One spouse has abandoned the other (38 percent).

- One spouse is abusing the other (37 percent).

- A spouse is addicted to pornography (35 percent).

Here's the bar graph depicting the views of pastors and Americans on all of the issues we included in our survey: 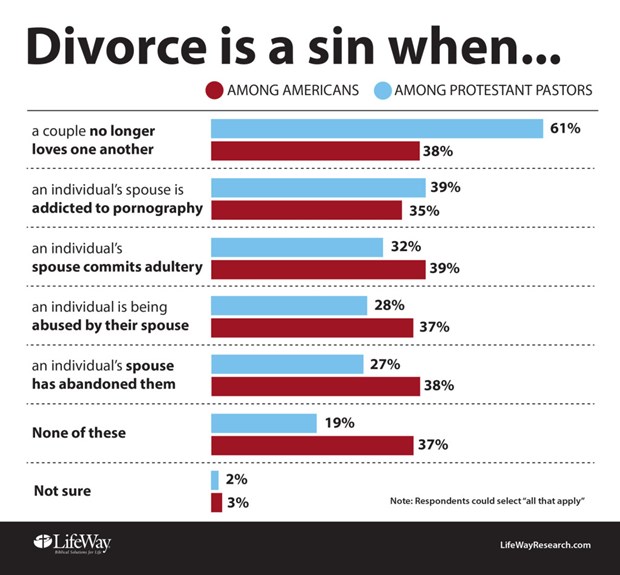 What Do Pastors Think?

Protestant pastors' views of the sinfulness of divorce did differ slightly from all Americans' view, but not drastically. Aaron Earls explains:

In a separate phone survey of 1,000 Protestant pastors, less than a third want to classify as sinful an individual divorcing their spouse for adultery (32 percent), abuse (28 percent), or abandonment (27 percent).

Pastors are more likely to call divorce a sin when a couple divorces over a pornography addiction (39 percent), and because the spouses no longer love another (61 percent).

In their views on divorce, Protestant church members are much more closely aligned with the average American than with their pastor. Virtually the same percentage of Protestants believes a divorce is sinful when it is over adultery (44 percent) or an end to their feelings of love (46 percent).

Timothy C. Morgan, in Christianity Today, reported on the disturbingly high percentage of both pastors and Americans who think a spouse is sinning if he or she divorces an abusive partner.

Twenty-eight percent of Protestant pastors believe it is sinful to divorce when one partner is being abused by the other, while 37% of Americans say the same. I found those numbers to be puzzling, as I told Timothy, but like I told him, people may see divorce as the best option in an abusive situation, yet still see it as sinful. Scripture doesn't explicitly say anything about divorce in the situation of abuse, so many pastors may not feel free to call it not sin.

Timothy corresponded with Justin Holcomb for his story. Justin authored Is It My Fault?Hope and Healing for Those Suffering Domestic Violence. I'm thankful for Justin—he's a good friend. Here's what Timothy included from his conversation with him:

"It is important to be clear what we are talking about—a person battering their spouse physically, emotionally, and psychologically," Holcomb said by email today.

Some pastors, he added, counsel spouses to stay in a marriage despite cases of abuse:

"I think there are a few reasons why many pastors and Americans unfortunately believe it is a sin for divorce in cases of abuse. One reason could be they hold marriage in high regard in the midst of a culture that seems to devalue marriage. However, they may be misapplying this value and think taking a zero-tolerance stance on divorce will stem the tide."

The question that follows a survey like this is actually a question LifeWay Research did some work on a few years ago. How do pastors handle the weddings of divorced people?

In 2011, we conducted a survey to find out when pastors would deny performing weddings for couples. This survey is perhaps as relevant as it has ever been with the recent Supreme Court ruling on same-sex marriage, but our study in 2011 wasn't focused on same-sex marriages. It was specifically focused on pastors and their views about performing weddings in general. Here's an excerpt from the report:

American Protestant pastors have widely varying standards for when they will and will not perform wedding ceremonies, according to a new survey by LifeWay Research.

The survey of 1,000 randomly selected Protestant pastors found that a majority (58 percent) will perform weddings for couples they know are living together. Nearly a third (31 percent) will not, and 10 percent are not sure.

“Marriage is a much-debated topic today and we wanted to see how Protestant pastors handled marriage requests,” said Scott McConnell, director of LifeWay Research. “Like the churches they serve, their standards for whom they will perform marriages vary greatly.”

But what about divorce specifically, as that data from 2011 is most relevant to our most recent study? Here's more:

Mainline and evangelical pastors divide again on the issue of performing marriages for divorced people. In response to the question, “When asked to do so, will you perform a marriage ceremony if the man or woman has been divorced?”:

Pastors, what about you? In what situations do you think divorce is sinful or not sinful? Would you perform the wedding of someone who has been divorced?