Need More Evidence Pastoring is Not a Doomsday Profession? Look at the Wesleyan Church

A lot of rumors fly about the poor state of pastors' emotional and mental health.
Ed Stetzer 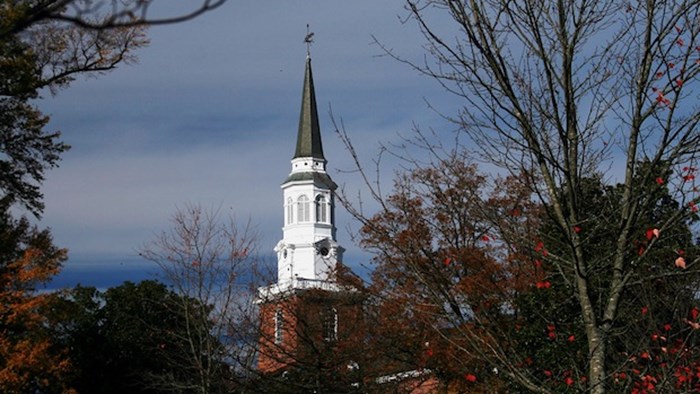 In case you have missed it, over the course of the last couple of months, I've been reiterating something I've been saying for a long time.

After that, I posted a Q&A I did with one of the people who was the original source of those stats. He contacted me on Twitter following the first post, we had a great conversation, and he was gracious enough to let me publish most of our discussion. Here's a bit of it:

Then, on Friday, November 6th, I wrote a lengthy post about how statistics continue to show that pastors are not miserable, but that they feel privileged to be in their roles. Here's a bit from that:

Pastoring is difficult, and family life is a fishbowl, but overstating the challenge and dangers of pastoring can discourage pastors and create an expectation of family disruption—leading to that very problem.

Positively, nearly eight in 10 pastors (79 percent) disagree with the statement, "Being in ministry has had a negative effect on my family." A majority (58 percent) strongly disagree. Twenty percent somewhat disagree, 15 percent somewhat agree and 4 percent strongly agree.

Pastoring can be stressful on a family, but contrary to some hyped statistics, most do not believe that being a pastor has hurt their family.

Just about a month ago, Warren Bird and I talked about this issue via video. Here's our conversation:

Well, recently, the Wesleyan Church did a study to see what their clergy retention was like from 2005-2008. Here's a graph: 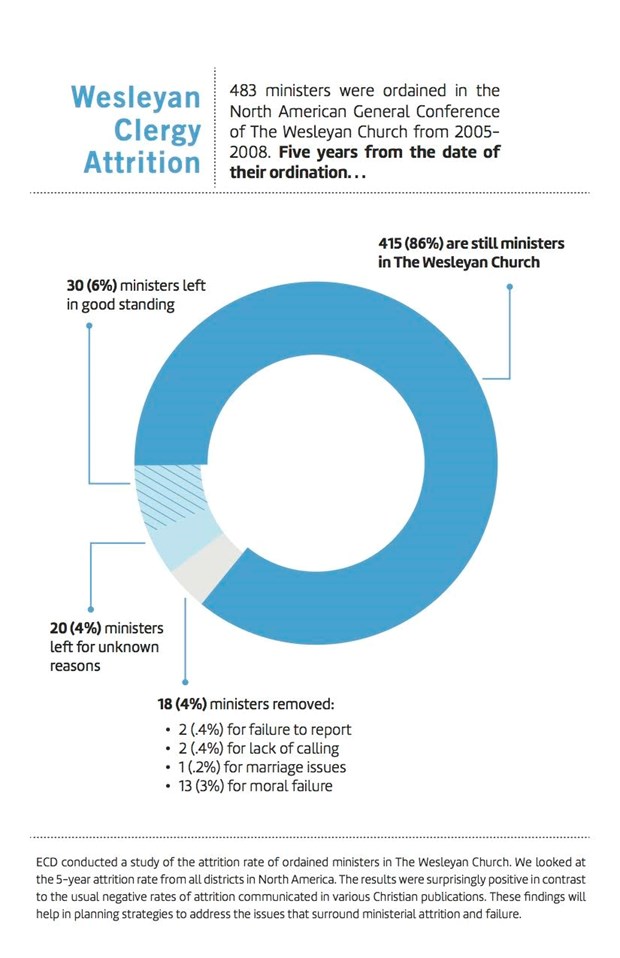 Between 2005 and 2008 483 ministers were ordained in the Wesleyan Church, and 415 stayed that way. Only 14 percent of ordained clergy left, and six percent of those left in good standing, four percent left for unknown reasons, and only four percent (18 clergy) had to be removed.

Yet somehow, the myths that thousands of pastors bail every year persists. Lawrence Wilson wrote on his blog in 2014:

An urban legend circulating around the church holds that pastoral ministry is the most highly stressed, undervalued profession on earth, and all pastors are miserable. In support, this factoid is nearly always given: “1,700 pastors leave the ministry each month.”

You’ll see that number touted on blog after blog—always without a citation. This unverified datum flits around the Net like a vampire bat, sucking passion from ministers and their churches.

And it simply isn’t true.

The myth seems to have originated with a statement by James Dobson in Family News by Dr. James Dobson, August 1998. Dobson wrote, “We estimate that approximately 1,500 pastors leave their assignments each month, due to moral failure, spiritual burnout or contention within their local congregations.”

The number stated was 1,500, not 1,700. The number was given an approximate estimate, not a fact. The source was a compilation of informal surveys completed by attendees at Focus on the Family pastor’s gatherings, not a statistically valid study of clergy in North America. Dobson never claimed these pastors left the ministry, only their current assignment. (Presumably, many or most changed jobs within their field, as many other people do every day.) The information is more than a decade out of date.

Yet the legend persists that 20,000 pastors run from their vocation every year screaming, “I just can’t take it anymore!”

Facts are our friends. Don't believe everything you read, especially when it comes to the state of the church.

Many people are passing around bad stats because they care and want to make changes for the better. But, others just want to sell their book or their conference. In other words, too many people serve to make too much money on perpetuating stats that make the church look bad.

Need More Evidence Pastoring is Not a Doomsday Profession? Look at the Wesleyan Church

Need More Evidence Pastoring is Not a Doomsday ...