Here's what we have planned so far for the the GC2 Summit on refugees.
Ed Stetzer 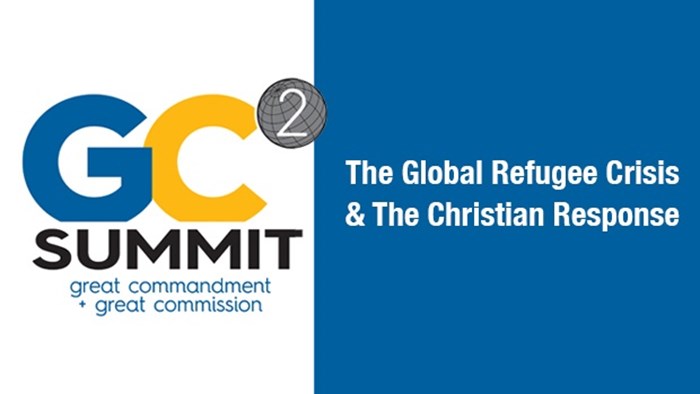 Recently, we announced the GC2 Summit, a gathering for Evangelicals to consider an appropriate response to the growing, global refugee crisis. Here's the more formal information.

The Billy Graham Center for Evangelism at Wheaton College (BGCE) and the Humanitarian Disaster Institute at Wheaton College (HDI) have announced a summit, in partnership with LifeWay Research, to help Christians respond to the global refugee crisis. The meeting, called a GC2 Summit, will focus on leading a conversation on meeting needs, caring for, and engaging refugees around the world.

The GC2 Summit will feature a number of key speakers and collaborators from the Evangelical community who specialize in ministry to refugees, in addition to senior denominational leaders, non-profit, and church leaders. The GC2 Summit will occur in two parts, with the first pre-meeting conversation occurring on Thursday, December 17, 2015, and the second gathering occurring on Wednesday, January 20, 2016. Both events will take place on the campus of Wheaton College.

The gathering on December 17, 2015, is an invite-only meeting, comprised of denominational, network, and non-profit leadership who are committed to leading organizations who deal with refugees. The event will feature speakers and presentations and culminate in the presentation of a document outlining agreed upon biblical standards and principles that should guide an Evangelical Christian understanding of how to engage the refugee community.

The gathering on January 20, 2016, will focus on equipping Christians and churches to connect with and serve refugees and refugee communities both domestically and internationally. This event will feature top speakers in the field who use biblical principles to help Christians and churches better understand their responsibility to show and share the love of Jesus Christ to refugees and their communities.

We have been busy at work over the past week putting these events together. I wanted to share with you just a few of the people who will be joining us as presenters for our initial gathering on December 17th. You can see their bio information below.

If you are the leader of a denomination, network, or non-profit, we want you to be a part of this meeting. We have had a tremendous response so far, but we still have room for more. If you would like to come, fill out the quick application for registration that is found at this link. I hope to see you there!

Dr. David Platt is President of the International Mission Board. David’s first love in ministry is making disciples, sharing, showing, and teaching God’s Word in everyday life. He has traveled extensively to serve alongside church leaders throughout the United States and around the world.

A life-long learner, David has earned two undergraduate and three advanced degrees. He holds a Bachelor of Arts and Bachelor of Arts in Journalism from the University of Georgia and an MDiv, ThM, and PhD from New Orleans Baptist Theological Seminary. He previously served at New Orleans Baptist Theological Seminary as Dean of Chapel and Assistant Professor of Expository Preaching and Apologetics, Staff Evangelist at Edgewater Baptist Church in New Orleans, and eight years as Senior Pastor of The Church at Brook Hills in Birmingham, Alabama. David has written several books, including Radical, Radical Together, Follow Me, and most recently Counter Culture. He also has a radio program on Moody Radio, Radical with David Platt, that can be heard around the world and features past sermons and teaching from David’s ministry.

Rich Stearns is President of World Vision U.S., one of the world’s largest nonprofit humanitarian organizations. In 1998, in the midst of a lucrative business career as the CEO of Lenox, Inc., he felt an unexpected, irresistible call to exchange “success” for service to those affected by poverty and injustice. Since then, he has tirelessly exhorted the American Church to recognize and respond to God’s heart for children and families in need.

Today, Rich is known among both Christian and secular audiences as a trustworthy voice illuminating the critical issues that affect the world’s poor, and urging those who can to make a difference. Rich is also the author of two acclaimed books—TheHole in Our Gospel and Unfinished—that address the vocation of Christ-followers to live out the whole gospel, bringing the good news to a hurting world in not only word but also deed.

In his time with World Vision, Rich has traveled to more than 40 of the nearly 100 countries where World Vision works, and has a firsthand understanding of the issues that affect those in poverty. Driven by his passion to raise awareness of those issues, Rich has appeared on CNN, Fox, ABC, NBC, and PBS, and written pieces for the Wall Street Journal, The Washington Post, The Huffington Post, and other media outlets.

Stephan Bauman is President/CEO of World Relief, an international relief and development organization that serves more five million vulnerable people each year through more than 100,000 church-based volunteers. Stephan’s pursuit of justice led him to transition from a successful career in the Fortune 100 sector to Africa, where he directed relief and development programs for nearly a decade before returning to the United States to lead World Relief’s global operations.

Stephan lives to see people everywhere rise to the call of justice and give their lives in ways that empower those in poverty towards real change, a journey he continues to pursue. Stephan holds degrees from Johns Hopkins University, Wheaton College, and the University of Wisconsin. He is a poet, an author, an ordained minister, and a Certified Public Accountant. He considers his African friends his most important teachers, and his wife, Belinda, his most important mentor. Stephan, Belinda, and their two sons, Joshua and Caleb, live near Washington, D.C., and, together, enjoy the woods, the arts, and late night conversations with friends.

Dr. Jo Anne Lyon is General Superintendent of The Wesleyan Church. The rich historical mission of the Church is committed to transforming lives, churches, and communities with the hope and holiness of Jesus Christ. Jo Anne serves on the board of directors of many organizations as representative of The Wesleyan Church, including the National Association of Evangelicals Executive Committee, Christian Community Development Association, National Religious Partnership for the Environment, Asbury Theological Seminary Board, Council on Faith of the World Economic Forum, the President of The United States Advisory Council on Faith-Based and Neighborhood Partnerships, and as an ex–officio member for all Wesleyan Institutions of Higher Education.

Jo Anne holds an MA in counseling, continued graduate studies in historical theology, and has been granted five honorary doctorates. She has written several articles and publications, including the book The Ultimate Blessing and has served for over 30 years in Pastoral Ministry. She has been Adjunct Professor of Church and Society at both Indiana Wesleyan University and Asbury Theological Seminary. As the founder/CEO of World Hope International (in Alexandria, Virginia), she directed the faith-based relief and development organizations into over 30 countries to alleviate suffering and injustice.

She and her husband, Wayne Lyon, live in the Indianapolis area. They have four children and ten grandchildren.

Dr. Alejandro (Alex) Mandes is a native of south Texas. He has advanced degrees in Social Work from the University of Texas and Theology from Dallas Theological Seminary. He has worked as a church planter, pastor, and Bible school teacher, and now serves as Director of Immigrant Mission for the Evangelical Free Church of America. In this capacity, he has created the EFCA GATEWAY Theological Institute, which provides informal theological training for urban and low-income pastors and immigrant hope.

Alex also serves as Executive Director for The Immigration Alliance, a coalition of evangelical denominations and organizations mobilizing churches to provide low-cost immigration legal services. He is married to Julie, with whom he has had five daughters, and is the proud abuelito of seven grandchildren.

We will also have a denominational leaders panel, including Alton Garrison (Assemblies of God), Frank Page (Southern Baptists), and others to be announced.