Try dancing around the reality all you want, exchanging human tissue for money is a "sale."
Ed Stetzer 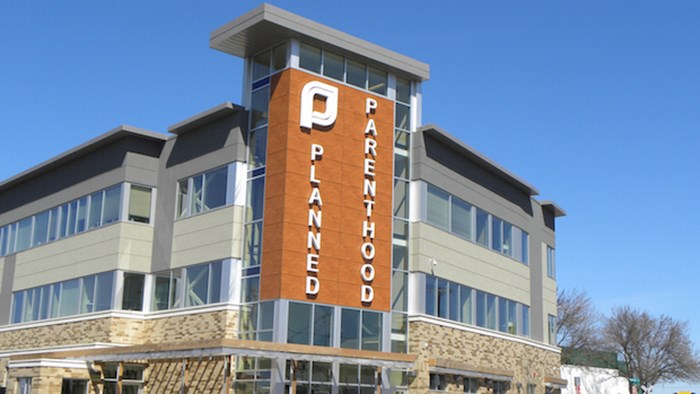 Watching people have discussions about how best to kill and dismember an unborn baby would be one of the things to be outraged about.

Yesterday, much news was made in the conservative world about a new video from an undercover conversation with a Planned Parenthood executive. In that video, over a casual lunch, people described horrific things like how best to kill an unborn baby and how some clinics aren't as good at it as they could be. The news coverage has been fascinating to say the least.

The Washington Post was probably the first in the mainstream media, and if you look at the URL, you can see they used the word "harvesting" at first and then changed the title to "Undercover video shows Planned Parenthood official discussing fetal organs used for research." There is no mention of the title change in the post, but this is more than "discussing fetal organs for research." For what it is worth, the process is technically called "organ harvesting," so no change was needed.

Under federal law, “It shall be unlawful for any person to knowingly acquire, receive, or otherwise transfer any human fetal tissue for valuable consideration if the transfer affects interstate commerce.”

And there are strict guidelines on how tissue can be donated. The woman having an abortion must give her consent, she must be made aware of all the risks, and “no alteration of the timing, method, or procedures used to terminate the pregnancy [can be] made solely for the purposes of obtaining the tissue.”

Still, no federal agency tracks how much tissue is donated or the details of those donations. And groups like Planned Parenthood can collect fees to reimburse their costs.

That’s when things get complicated. In the taped conversation, Nucatola described the process almost like haggling:

You know, I would throw a number out, I would say it’s probably anywhere from $30 to $100 [per specimen], depending on the facility and what’s involved. It just has to do with space issues, are you sending someone there who’s going to be doing everything, is there shipping involved, is somebody gonna have to take it out. You know, I think everybody just wants, it’s really just about if anyone were ever to ask them, “What do you do for this $60? How can you justify that? Or are you basically just doing something completely egregious, that you should be doing for free.” So it just needs to be justifiable.

As CT reported in 2000, payments for fetal tissue donations are allowed under a loophole in the 1993 rule that bans the sale of fetal remains.

When it comes down to it, we have a conversation about language, and the question is whether or not Planned Parenthood is selling the body parts of aborted children.

Here is a brochure from a Planned Parenthood partner, StemExpress. Notice they pitch their services to potential business partners as "providing a financial benefit to your clinic" and "contributing to the fiscal growth of your own clinic." The recovery of shipping costs accomplishes neither of those things.

Ultimately, there is no question that money was discussed and would be exchanged, that ways to better kill an unborn baby were included, and that the brochure explains how your clinic can financially benefit from such things. That's called "selling" no matter how you want to spin it.

Here is the brochure, and an excerpt. Read the whole thing, but let's not miss the phrase that this will be "contributing to the fiscal growth of your own clinic." 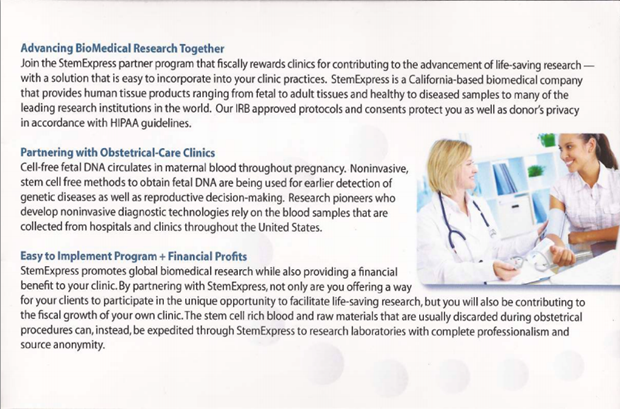 So regardless of where you stand on any issue related to pro-life or pro-choice, you should be aghast at this video and the brochure. This matters. It is an issue of justice, one that perfectly captures the need for it—you can watch the video to see.

If this were about puppies, and selling their body parts, this would be the lead story on every news station around the country. But it's not. It's about unborn children. And so, we have laws saying you can't sell human tissue.

In health care, patients sometimes want to donate tissue to scientific research that can help lead to medical breakthroughs, such as treatments and cures for serious diseases. Women at Planned Parenthood who have abortions are no different. At several of our health centers, we help patients who want to donate tissue for scientific research, and we do this just like every other high-quality health care provider does -- with full, appropriate consent from patients and under the highest ethical and legal standards. There is no financial benefit for tissue donation for either the patient or for Planned Parenthood. In some instances, actual costs, such as the cost to transport tissue to leading research centers, are reimbursed, which is standard across the medical field.

So, there is "no financial benefit" but selling of these body parts, which, quoting Christianity Today, "is seemingly 'haggled' over price," and, quoting the brochure, will "contribut[e] to the fiscal growth of your own clinic."

The video identified a woman speaking about selling fetus body parts as Planned Parenthood Federation of America’s senior director of medical services, Dr. Deborah Nucatola. Planned Parenthood confirmed on Tuesday that Nucatola was in the video.

In the same article, Reuters also included comments from a Northwestern University Professor:

Laurie Zoloth, a professor of medical humanities and bioethics at Northwestern University, said in an emailed reply to a request for comment that the film was "being used to inflame people about abortion, about which there is a substantial consensus, that abortion should be legal, and rare."

However, Zoloth said it was "terribly disturbing because the physician seems to be engaged in a transaction in which the goal is to extract tissue to meet the needs of a company, rather than being focused on the core purpose of her clinic, which is to provide a safe medical procedure."

She termed that "an obvious conflict of interest."

Zoloth also pointed to the attitude of the physician in the video, observing, "The doctor seems extraordinarily cavalier ... Having this discussion over a meal, while drinking what appears to be wine, takes this further from the realm of professional clinical medicine and into the realm of business."

And, yes, I noticed that the ethics of taking the life of an unborn child are noticeably absent.

Reuters calls it selling (and so do I). Yes, Planned Parenthood is working VERY hard to say it is not, but be sure to watch the actual video and you can decide. And, while people quibble about the word selling, take a few moments to wonder at what point we would debate the word selling while others discussed the prices of body parts.

Regardless of who you describe it, your conversation ought to include some synonym of the word "horrified." Before you do anything else, watch the video below if you haven't already.

You can watch the short version here:

Then watch the full video here.

My hope is that more and more people will see abortion for what it is and Planned Parenthood for who it is.