The Supreme Court has taken action on same-sex marriage, and now the church needs to take its own action.
Ed Stetzer 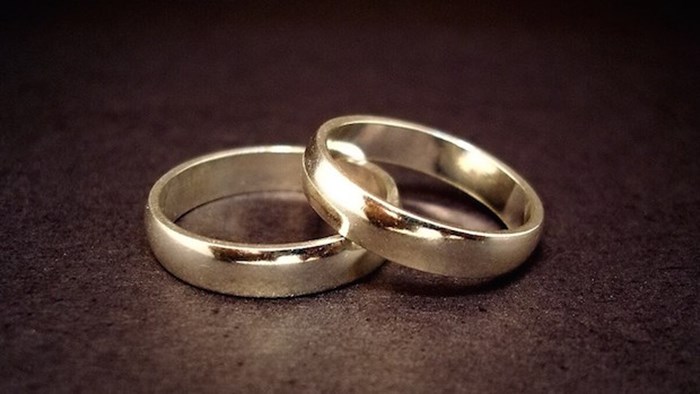 Just now, by a vote of five to four the Supreme Court of the United States ruled that same-sex couples may now marry in all 50 states, striking down the bans of states who have attempted do so. The Supreme Court ruled in favor of Jim Obergefell in Obergefell v. Hodges, a conglomerate of cases suing for the recognition of same-sex marriage. Read the decision here.

Here's a bit of insight from CBS News on where the case got its name:

In the case before the court, Ohio resident Jim Obergefell is suing the state for recognition of his marriage to John Arthur. The pair were legally married in Maryland where same-sex marriage is legal, but when Arthur died two years ago the state of Ohio refused to put Obergefell's name on the death certificate as the surviving spouse.

In 2013, when the Supreme Court struck down the Defense of Marriage Act, I reflected on how Christians might live in light of the ruling, and much of what I wrote two years ago still applies even amidst this latest ruling.

Christians have been here before—in Canada, Brazil, and in other places—and they are still on mission. And, in many of those places, the church is growing and people are coming to faith.

But, it is important to know the culture and the context of this ruling. As such, let's review some of the most recent research in light of the ruling. In the last six months, LifeWay Research has conducted ongoing research around the topic of same-sex marriage and homosexuality, and I imagine some of these studies will become much more important in the days to come.

Marriage and the Government

In December of last year, we conducted a study about Americans' view of the government's involvement in the marriage ceremony. Here is an excerpt from the study and a graph:

Six in 10 (59 percent) disagree with the statement, “Marriage should be defined and regulated by the state.” About a third (36 percent) agree. Five percent are not sure.

Those who identify as Christians (37 percent) are more likely to agree than the nonreligious (30 percent.) Evangelicals are less likely to disagree (55 percent).

About half of Americans favor a split between civil and religious marriage. 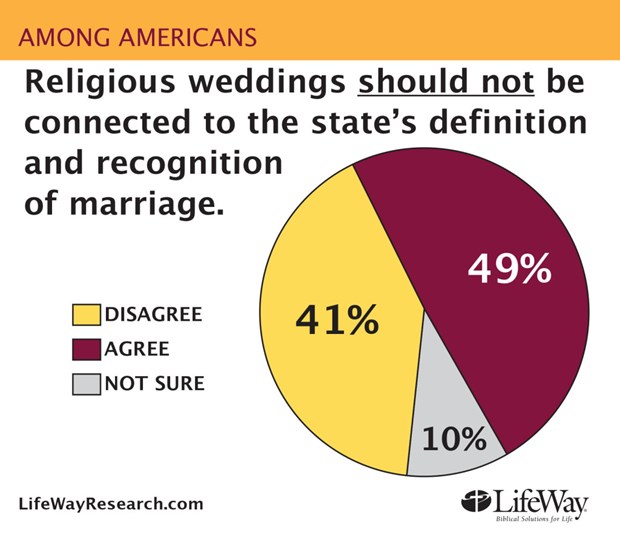 I imagine that the governmental re-definition of marriage will lead to more Americans wanting to separate from the government's involvement in marriage licensing. I imagine that more Christians will take the path suggested recently in First Things, opting out of government-sanctioned marriage.

The court is ahead of public opinion for some Americans, but not ahead of most Americans. This is essential.

Study after study has shown some remarkably rapid shifting around the LGBT views. There are many reasons, and America can change its mind quickly, but some of that has to do with relationships.

Just a couple of months ago, we released data that shows that the way Americans view gay marriage is often impacted by whether or not they have friends or loved ones who are involved. Here's a bit from that study:

Americans who say they have gay or lesbian friends are twice as likely to say gay marriage should be legal.

Fewer than half of Americans say homosexuality is sinful.

And evangelicals are increasingly at odds with American culture over same-sex relationships.

Those are among the findings of a phone survey of 2,000 Americans about gay marriage from Nashville-based LifeWay Research. Researchers found that friendship and faith play an influential role in how Americans view gay marriage. 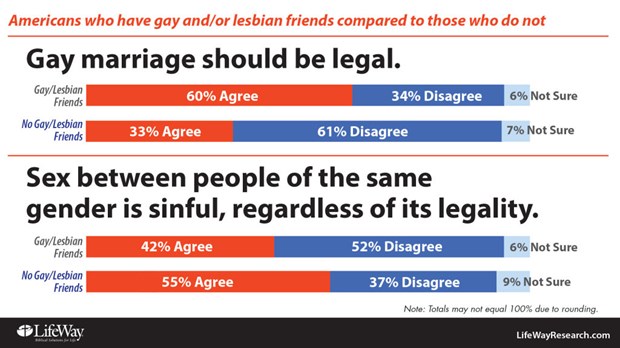 Obviously, Americans' views of homosexuality and same-sex marriage are fluid and are impacted by relationships and changing cultural norms—hence some of the rapid pace of change. That's important to note—minds were changeable and have been changing.

The trajectory, regardless of the Court's ruling, has been and remains one of acceptance toward same-sex marriage.

Only practicing evangelicals and practicing Catholics are large groups who are not shifting with the rest of the population.

Regardless of what you think, feel, or believe about the place same-sex marriage has in the United States, you must now live in the reality that it is legal. The government has re-defined marriage as it pertains to the government system.

The big question Christians must ask is, "What do we do now?"

What Do We Do Now?

As always, the ever-changing world around us does not change who God is and what he calls us to do.

Regardless of how the Supreme Court rules on same-sex marriage, abortion, immigration, or any other issues, God remains sovereign and this ruling was no surprise to him.

I know that seems simplistic, and the issues that surround us today are complex, but I think before we dive into a discussion about living in a culture moving in a different direction than Christian views, we need to remind ourselves that God is still God, and God is still good.

After acknowledging that reality, here are three basic steps we can take to live in a culture in which Christianity continues to lose its "home field advantage":

To some of you, this may sound trite and lame, but I'm serious. I'm of the conviction that Christians don't pray enough, especially about difficult issues such as this. We pray before we eat, and we pray before we sleep, but we don't pray enough in between. Especially in the West, where everything is "do do do," we often act before praying and asking God for wisdom, strength, and the like.

Seriously, before you engage in conversations about marriage on social media, in your churches, or in your communities, take a portion of time and devote it to prayer. Ask the Lord to reveal the needs of the people around you. Ask him to give you a spirit of compassion amidst the proclamation of truth. We rightly care about marriage, but we can't do it alone.

Warren Wiersbe is quoted as saying, "Truth without love is brutality, and love without truth is hypocrisy." I like this quote because it emphasizes the importance of both truth and love. One without the other simply doesn't cut it.

As we live in a culture that has just defined marriage in a way contrary to what evangelicals and others believe, we must understand that, as Christians, we aren't the only ones who care about marriage. As a result, we must keep in mind that discussions surrounding the definition of marriage carry a lot of emotions and must be handled with care.

As evangelicals contend for the definition of marriage in spheres outside the law (that is settled now), we must keep in mind truth is often not heard if it's not communicated in love. If we want to be heard, we should communicate in a way worth hearing.

At the same time, as debates will ensue about attending or serving same-sex weddings and other such issues, we must both act in accordance with our consciences and act with love for our neighbor.

For instance, much of the conversation in conservative circles has been about what we won't affirm or won't participate in. But, we need a conversation about how we will show love to our neighbor who differs on the issue (that's a growing majority) and particularly about how we might love our LGBT neighbor.

This is not the first time that same-sex marriage has been legal. The people of Maine voted on November 6, 2012 to legally recognize same-sex marriage. I had the privilege to preach in Maine the Sunday after that Tuesday at the largest church in the state—the Pathway Vineyard.

The sky did not fall, no churches were padlocked, and the church did what they did the week before when marriage was solely between a man and a woman. They showed and shared the love of Jesus.

They did not scream in anger or lash out in hate. They know what I have said before: you cannot hate a people and reach a people at the same time. They remained on mission.

Regardless of how cultural issues like this are decided, and no matter what sort of authority Christian values have in culture, we must always be about Jesus' mission.

The good news that God sent his Son to live a perfect life, die the death we deserved to die, and rise again to glory is of first importance and is true regardless of courts, laws, or culture.

As believers, and ones who are sent by Jesus as Great Commissionaries, we must pray for our communities, love our neighbors and share the hope that is within us.

The focus must not be panic... or anger... or fear... or disdain. Our focus must be mission.

The National Association of Evangelicals has issued a statement here.

Mark Galli writes for Christianity Today, "Six Things To Do after the Supreme Court Decision on Gay Marriage."

Collin Hansen, editorial director for The Gospel Coalition, wrote at the Washington Post, "Why the Supreme Court decision on gay marriage represents a new era for evangelicals."

Trevin Wax shares the top 10 quotes from the dissending Justices on the same-sex marriage decision.

We will be updating this post throughout the day as more information becomes clear and is clarified.