In an article for CNN over the weekend, I explain the differences between Cultural, Congregational, and Convictional Christians.
Ed Stetzer 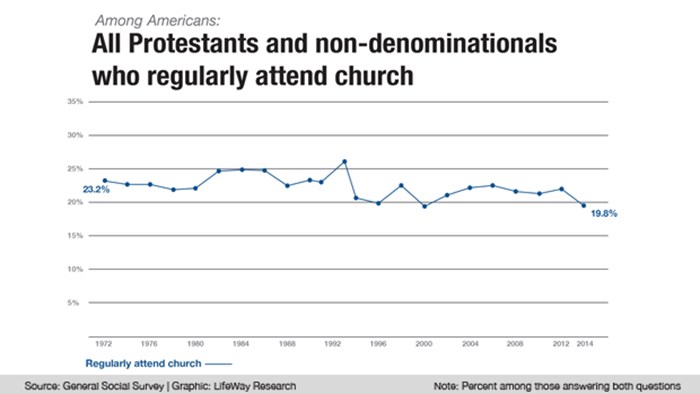 The "Christian Sky is (NOT) Falling"— My Piece for USAToday

The Evangelicalization of American Christianity: My Piece for the Washington Post

In case you missed it, though I'm not sure how you could have at this point, last week, the Pew Research Center released a ton of data from a survey on the religious landscape of America. I wrote about it here on the blog, for the Washington Post, the USAToday, and CNN.

Below is an excerpt from my CNN article called "No, American Christianity is not dead."

There is much talk about Christianity dying, which is just bad math (or another agenda). In this article, I used some brand-new General Social Survey (GSS) analysis. (The GSS was just released a month ago and I've not seen this analysis anywhere yet.)

So, here is an ongoing, forty-year, widely-respected survey. You decide if Christianity is dying. The graph at the top is all Protestant church attendees. Here is the evangelical trend since this is, indeed, and evangelical publication: 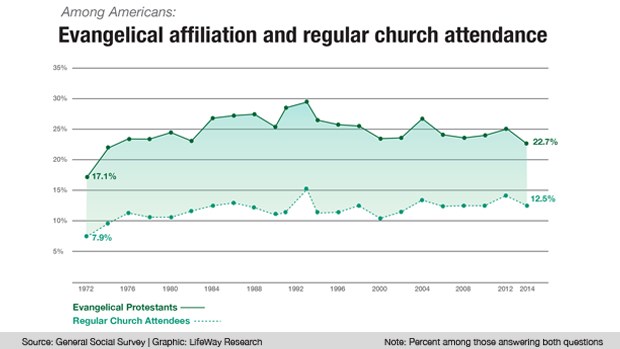 Be sure to read the rest on CNN's site too to see the other graphic that helps illustrate the point:

The headlines were deafening this week -- if current trends continue, the last Christian at Boston's historic Park Street Church will leave the faith in a few decades, join a Wiccan coven on Harvard Square, tell her live-in atheist boyfriend that Christianity is dead, and we'll all just move on from this failed Christian experiment...

A better reading of the stats is found when you move beyond the headlines and see a long, slow (but accelerating) decline of (mostly) nominal Christianity. However, the percentage of convictional Christians has remained relatively steady, with some decline. The decline of nominal Christianity is not the only thing happening, but it's a big part of the real story.

It's helpful to statistically clarify Christianity in the United States into three categories—cultural, congregational, and convictional. The first two categories are nominal Christians—they identify, but do not shape their lives around the Christian faith...

Yet, the majority of people who use the term Christian, do so in a way that is different from their church-going and faith-driven friends. Think about it—your religious uncle and irreligious neighbor could both call themselves Christians, but mean different things. I am not deciding here who is and who is not a Christian, but I am saying that it means different things to different people.